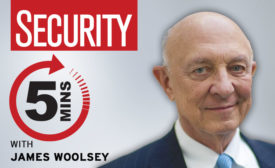 5 minutes with James Woolsey – On securing U.S. voting systems now and into the future

Maggie Shein
Former Central Intelligence Agency (CIA) Director R. James Woolsey Jr., a veteran of four presidential administrations and one of the nation’s leading intelligence experts, believes we should be worried about election security on a number of levels — though he says there are some relatively easy fixes. Woolsey discusses security threats surrounding the voting process, measures that can be put in place to mitigate those risks, as well as the biggest security threat to the U.S. outside of election security.
Read More
Subscribe For Free!
More Videos