This website requires certain cookies to work and uses other cookies to help you have the best experience. By visiting this website, certain cookies have already been set, which you may delete and block. By closing this message or continuing to use our site, you agree to the use of cookies. Visit our updated privacy and cookie policy to learn more.
Home » Increased healthcare security risks due to Roe v Wade reversal
ManagementPhysicalSecurity Enterprise ServicesSecurity Leadership and ManagementSecurity & Business ResilienceSecurity Education & TrainingAccess ManagementFire & Life SafetyPhysical SecurityHospitals & Medical Centers

With the Supreme Court overturning of the 1973 Roe v. Wade case that legalized abortion nationwide, multiple downstream effects may impact healthcare security. Now that abortion legality is determined by each individual state, healthcare security faces a challenging environment as they try to understand how laws will be implemented and enforced (civil vs. criminal).

To prepare for the unexpected, healthcare facilities (HCFs) and security teams should take the following recommendations and the necessary steps to best protect the safety and security of patients and healthcare professionals. 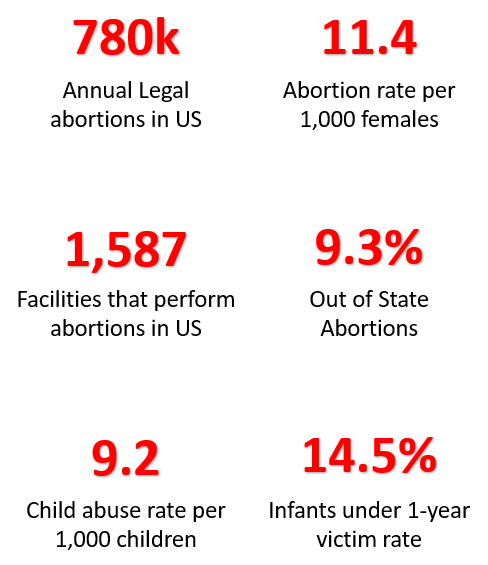 Figures reported are based on reports from clinics, hospitals, or physician offices and include the use of abortion pills at these sites. The number of sites that provide legal abortions has steadily decreased year over year since 1982, with an estimated total of approximately 1,587. There are currently eight states that have completely banned abortion; four states banned it after six weeks; and several other states banned it after 20+ weeks.

Several states are enacting the trigger law, which allows legal abortions for females that were raped or to save the life of the mother. According to RAINN, there are, on average, 463,000 victims of rape and sexual assault each year in the U.S. Approximately 250,000 of those raped are females of childbearing age. In addition, 94% of women raped experience some form of post-traumatic stress disorder (PTSD).

According to the Office of the Administration for Children & Families, in 2020, 9.2 per 1,000 children will be child victims of maltreatment or safety. Of those, 14.53% occur in infants under 12 months of age. Research shows that Shaken Baby Syndrome is the leading cause of child abuse deaths in the U.S. With over 1,300 cases per year, 80% of survivors suffer permanent damage, and 25% of SBS victims die.

While it is difficult to predict all the impacts the overturn of Roe v Wade may have on HCF security, below are a few examples that are top of mind based on systems theory and downstream effects.

HCF safety and security considerations include:

The impact of coaching to reduce healthcare workplace violence Katarina Kemper is Founder, Principal Consultant, and CEO of Healthcare Public Safety and Security Consultants, LLC. Previously, she was Director of Physical Security for HCA Healthcare. Kemper has more than 24 years of experience in healthcare quality, risk, safety, security and emergency preparedness and has have previously worked as a state investigator. Kemper has a Bachelor’s degree in criminal justice from Chaminade University and a Master’s degree in organizational leadership from Colorado State University.

Healthcare + Security: Why it needs to matter to everyone

Evacuation efforts underway in Ukraine due to safety & security concerns