The Federal Bureau of Investigation (FBI) designated 61 shootings in 2021 as active shooter incidents. The FBI defines an active shooter as one or more individuals actively engaged in killing or attempting to kill people in a populated area. Implicit in this definition is the shooter’s use of a firearm. The active aspect of the definition implies the ongoing nature of an incident and thus the potential for the response to affect the outcome.

When evaluating shooting incidents to determine if they meet the FBI’s active shooter definitions, researchers considered for inclusion:

The report does not encompass all gun-related shootings, and gun-related incidents were excluded if research established it was the result of self-defense, gang violence, drug violence, contained residential or domestic disputes, controlled barricade/hostage situations, crossfire, or an action that appeared not to have put other people in danger.

A breakdown of the number of incidents within the five-year period of 2017-2021 is as follows: 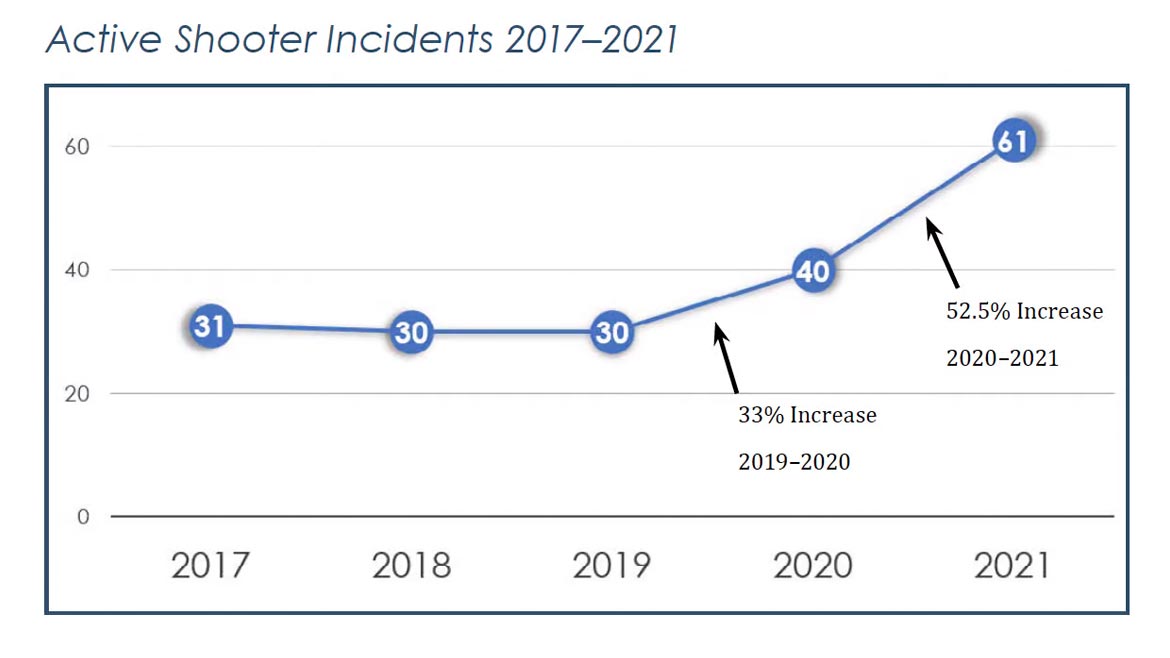 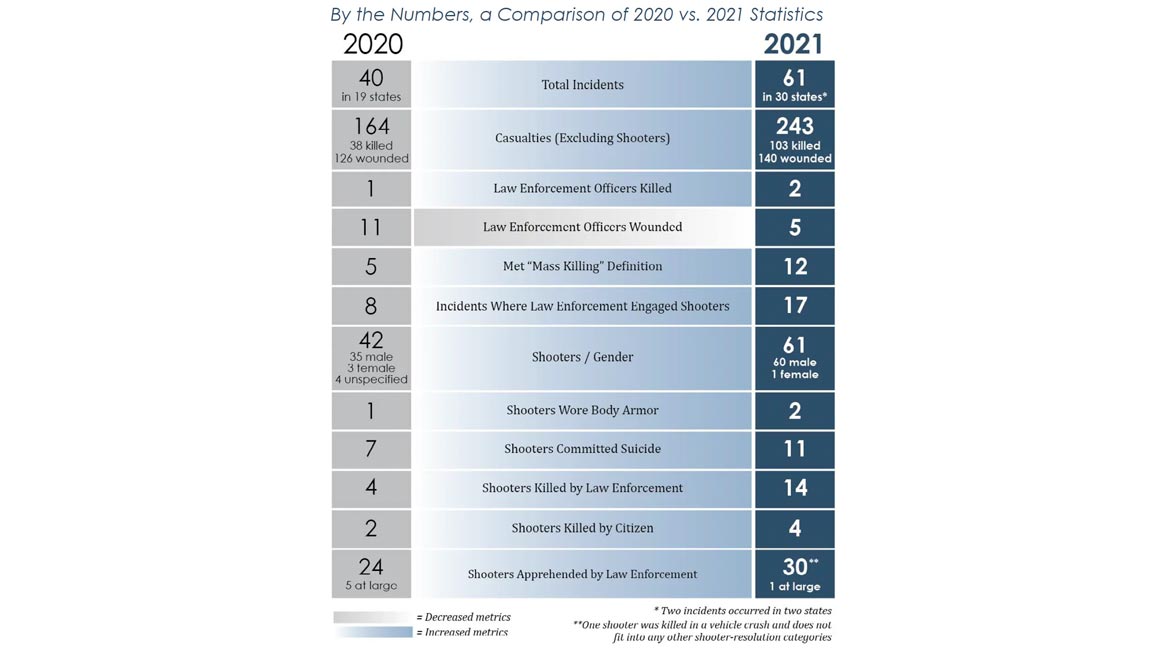 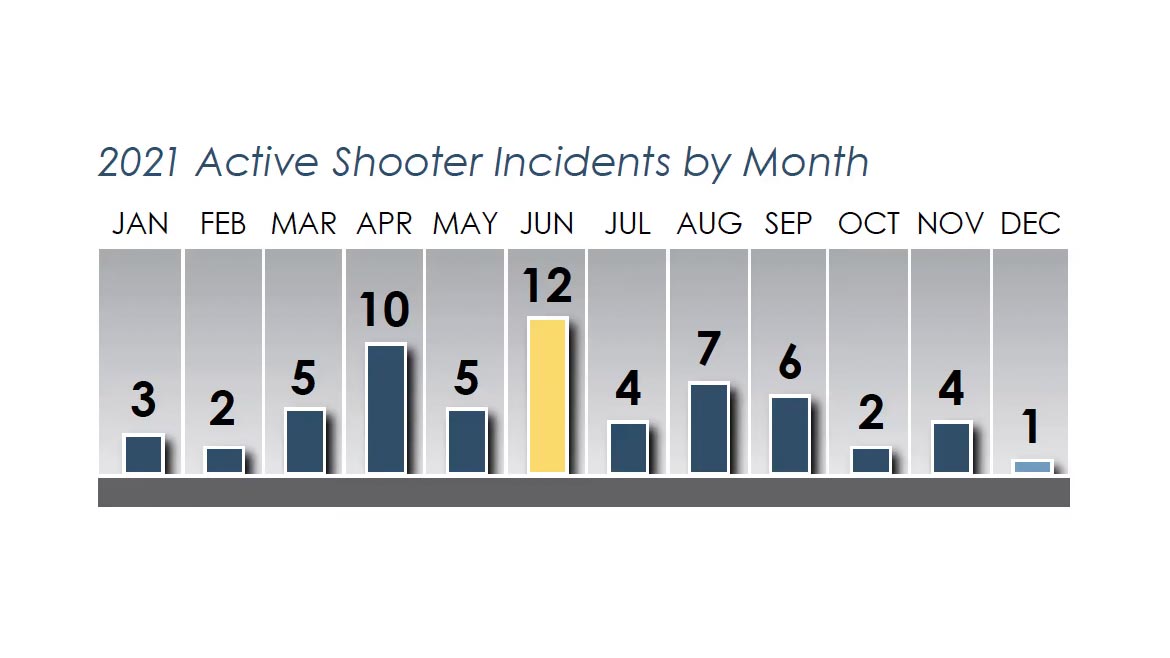 Unlike 2020, active shooter incidents occurred every day of the week. Like 2020, Saturdays saw the most incidents (14). 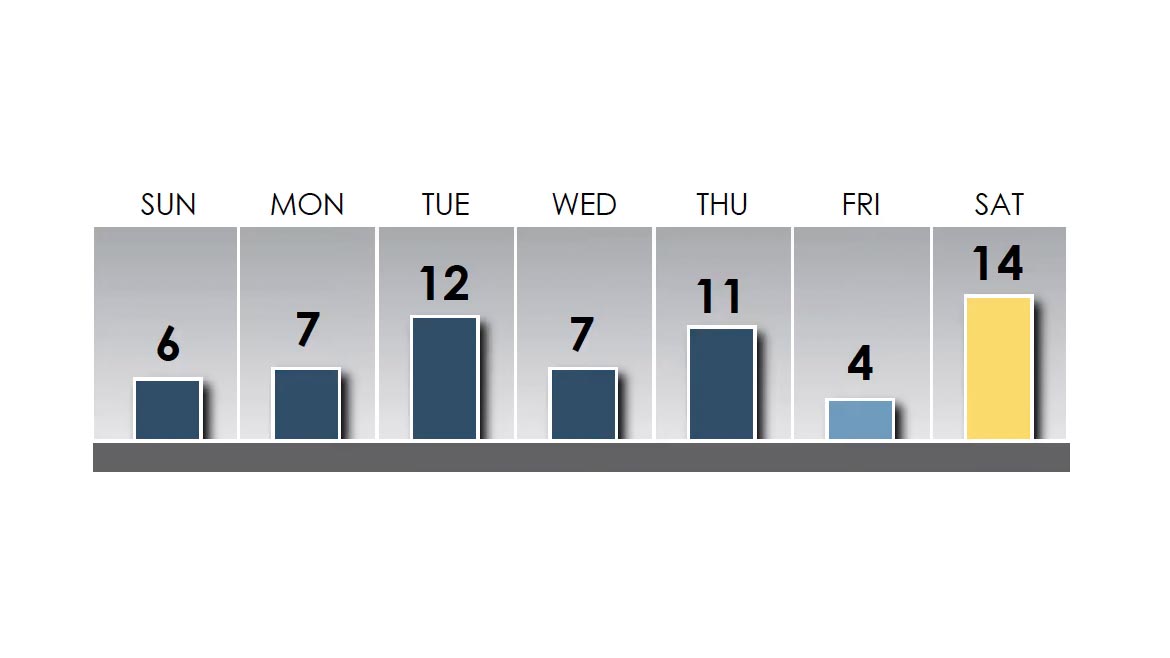 A breakdown of number of incidents by time is as follows: 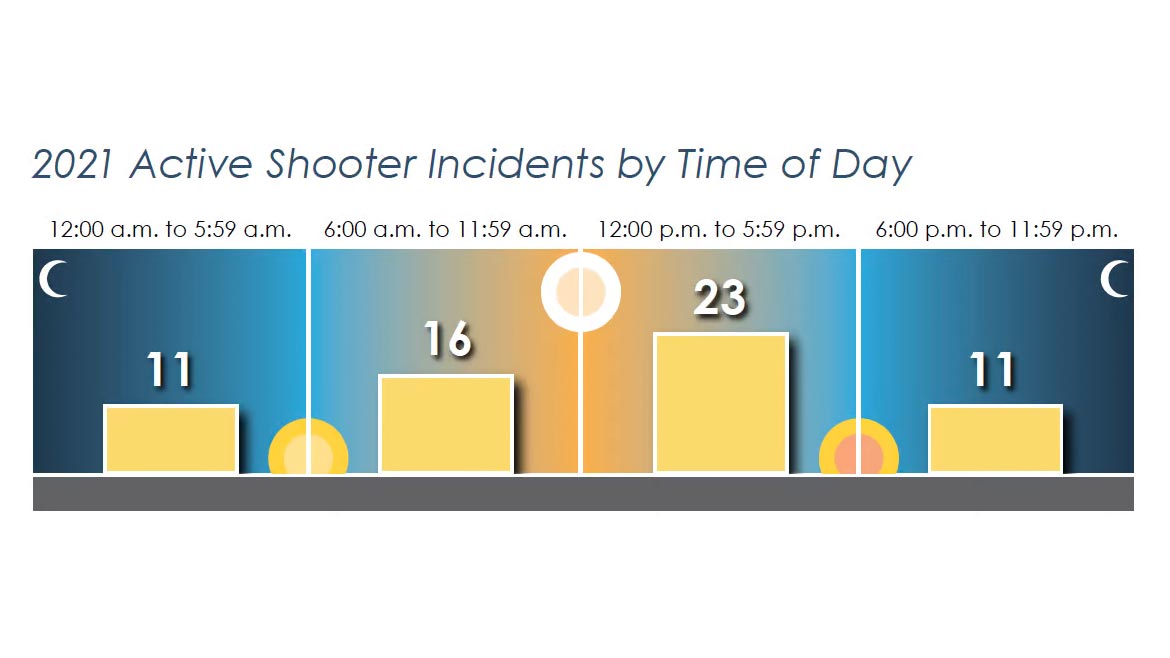 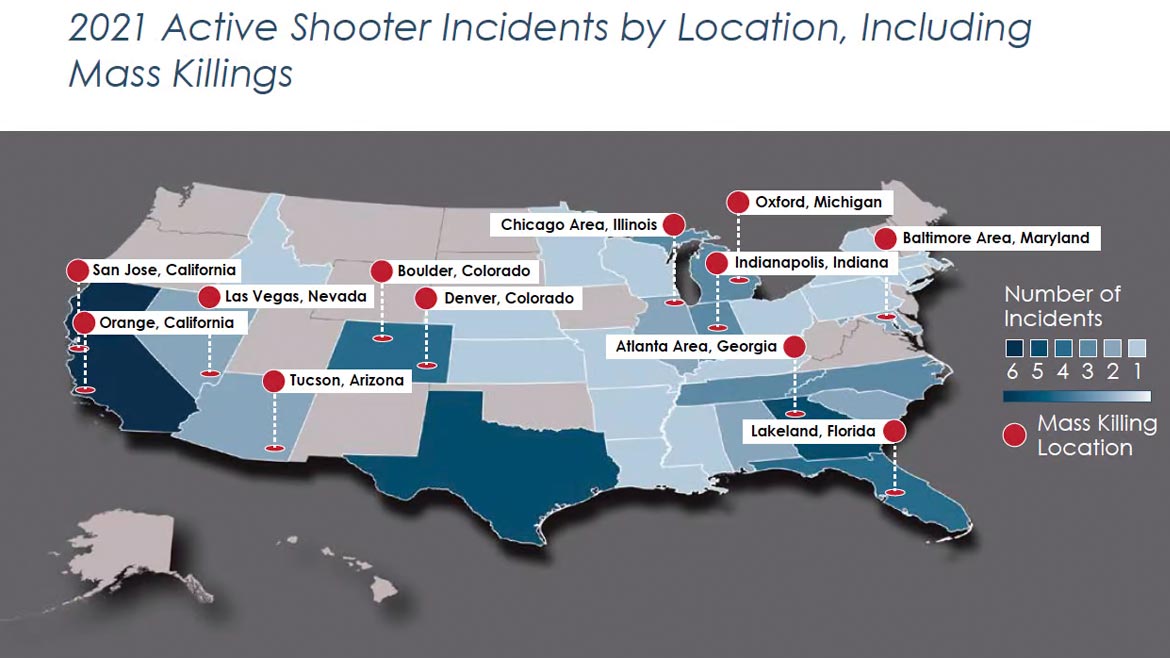 Twelve of the 61 incidents met the criteria cited in the federal definition of mass killings — three or more killings in a single incident. 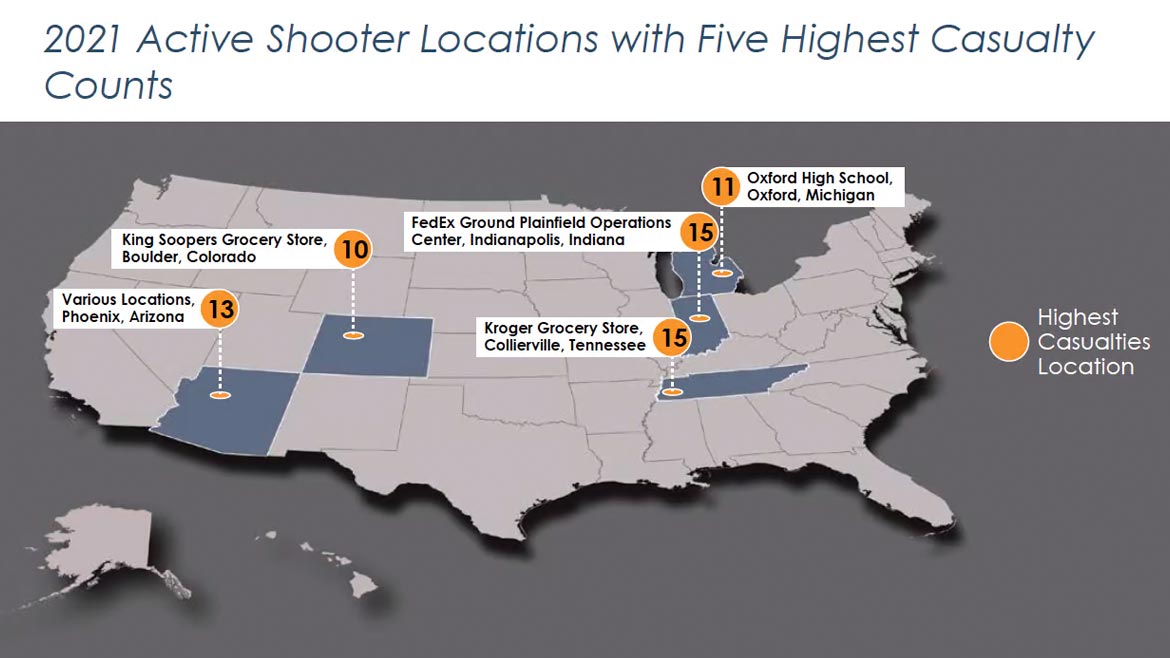 The 61 active shooter incidents reviewed in this report resulted in 243 total casualties — the number of people killed or wounded — to be exact, 103 were killed and 140 were wounded, excluding the shooters. In this report, persons described as “wounded” were not injured by gunfire but rather suffered injuries incidental to the shooting, such as being hit by flying objects or shattered glass, or falling while running. These were included in the casualty count when research may not have allowed for the type of injury to be discerned.

A breakdown of the incidents/locations with the five highest total casualty counts is as follows: 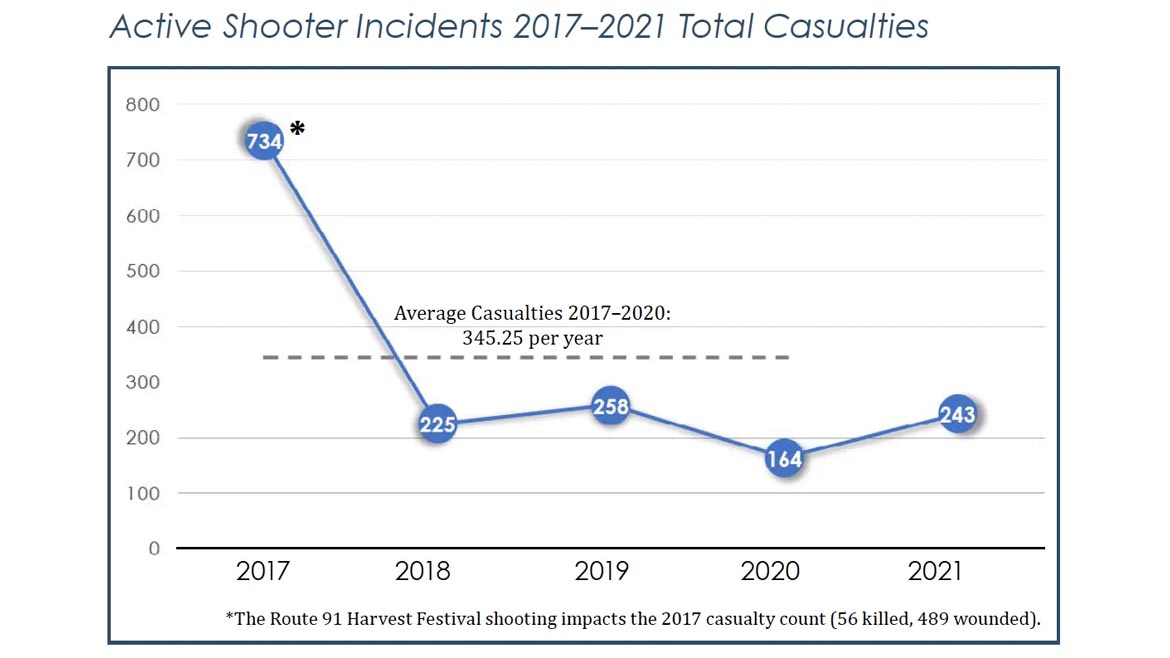 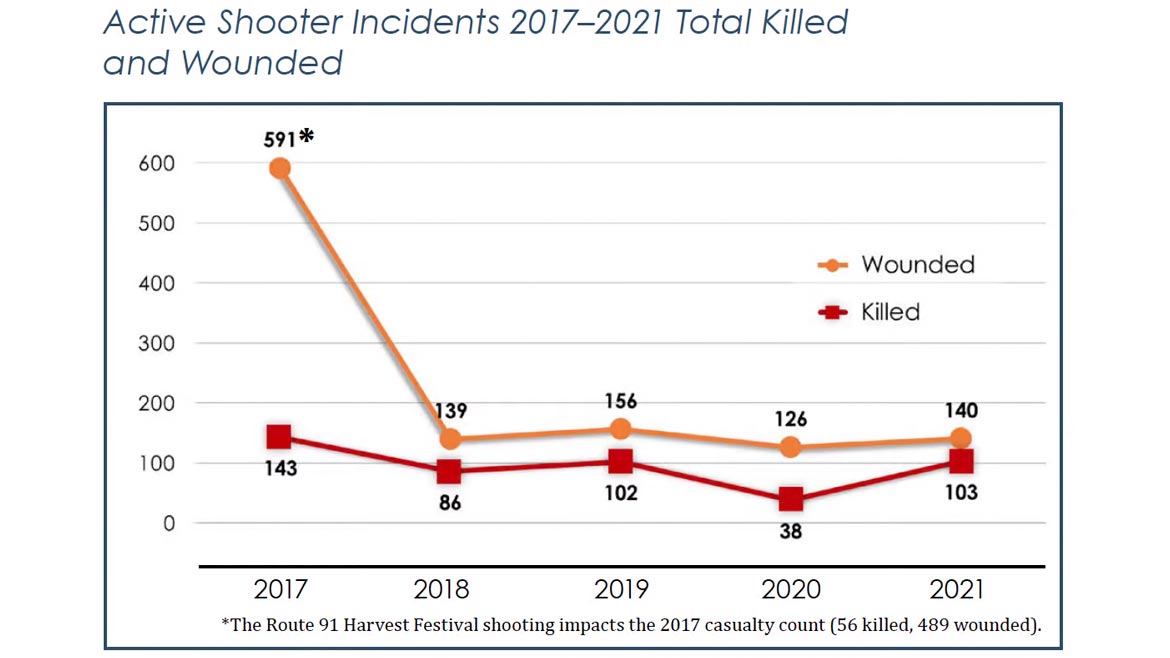 When strictly talking about deaths, the highest number of deaths from an active shooter incident in 2021 occurred at the King Soopers Grocery Store, Boulder, Colorado, where 10 people were killed. The second highest number of deaths occurred at Santa Clara Valley Transportation Authority Rail Yard, San Jose, California, where nine people were killed.

Thirty-two of the 61 active shooter incidents occurred in areas of commerce, resulting in 68 killed and 72 wounded. Twenty-eight incidents occurred in business environments open to pedestrian traffic, resulting in 57 killed, including three managers, 17 employees, two law enforcement officers, and one security officer. Fifty-four were wounded, including 17 employees, and one law enforcement officer.

Three of the 61 incidents occurred at residential locations, resulting in six victims killed and one wounded.

One of the 61 incidents occurred at a house of worship location, with no casualties reported.

One of the 61 incidents occurred at a healthcare location, resulting in one killed and four wounded.

Sixty-one shooters carried out 61 active shooter incidents. Sixty shooters were male, and one was

Other details about the shooters include: 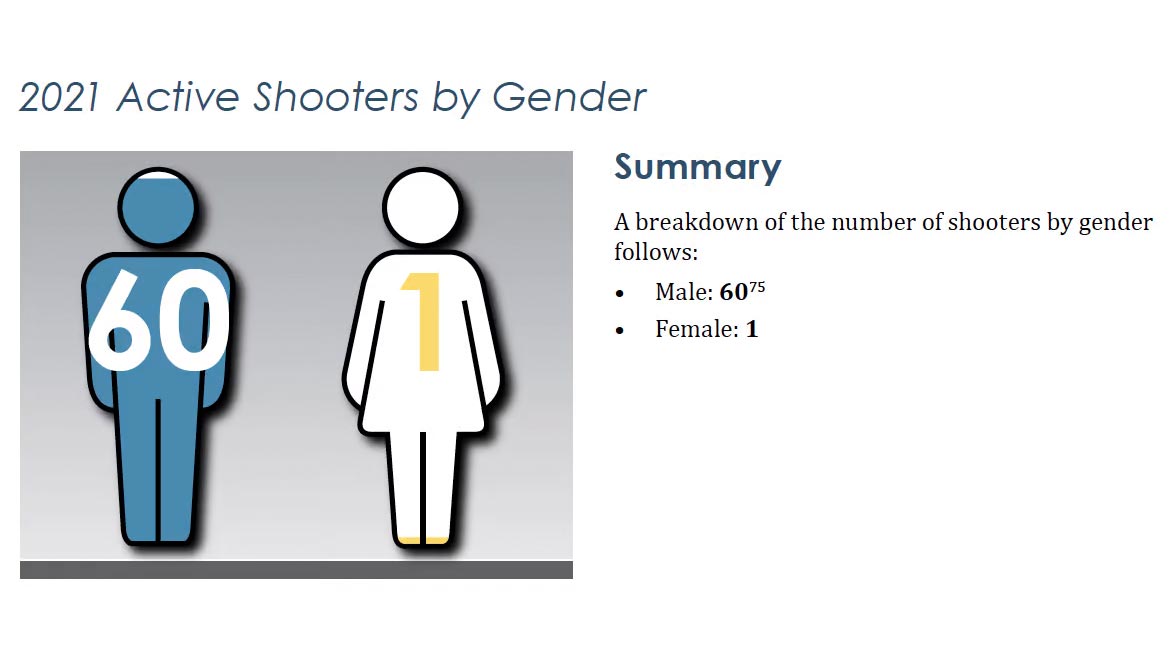 A breakdown of the number of shooters by age group follows:

For 2021, the FBI observed an emerging trend involving active shooters — shooters who shoot in multiple locations, either in one day or in various locations over several days.

John Cohen, the former Acting Undersecretary for Intelligence and Analysis at the Department of Homeland Security, told ABC News that the United States is seeing another trend with active shooters. “The U.S. is in the midst of a multiyear trend where we are experiencing an increase in mass shooters who are seeking to advance their ideological beliefs or based on a perceived personal grievance,” Cohen said. “A growing subset of our population believes that violence is an acceptable way to express one’s ideological beliefs or seek redress for a perceived personal grievance.”

The Gun Violence Archive (GVA), which tracks gun violence incidents collected from more than 7,500 law enforcement, media, government and commercial sources, tracked 692 mass shootings in 2021, the worst year on record for the number of mass shootings since GVA began tracking mass shootings in 2014. The not-for-profit uses a statistical threshold for definite mass shootings based only on the numeric value of 4 or more shot or killed, not including the shooter.

As of July 6, 2022, there have been 320 mass shootings since the year began, around the same number the country saw in the same January-June period last year. This number is on pace to match or surpass 2021.

It is imperative that security leaders understand the risks faced by active shooter situations and train on active shooter prevention, response and recovery efforts, as well as train their law enforcement partners.