This website requires certain cookies to work and uses other cookies to help you have the best experience. By visiting this website, certain cookies have already been set, which you may delete and block. By closing this message or continuing to use our site, you agree to the use of cookies. Visit our updated privacy and cookie policy to learn more.
Home » Half of the Nation’s Workforce Have Lost a Job or Income Due to Coronavirus
Security NewswireEconomic Impact of CoronavirusCoronavirus News

With many businesses shut down and job losses mounting nationwide, just over half of the nation’s workers (55 percent) now say they have lost a job or had their incomes reduced as a result of the health and economic crises sparked by the novel coronavirus pandemic, the latest KFF Health Tracking poll finds.

This includes a quarter (26%) of all those who were working on Feb. 1 who say they lost a job and another seven percent who say they got furloughed, as well as those who say their work hours have been reduced (21 percent) or that they have had to take a pay cut (13 percent).

Among those who were working part-time in February, three-quarters (76 percent) report a lost job or income. The shares are also higher-than-average among those who are paid by the hour or the job (68 percent) and those with low (65 percent) or moderate (62 percent) incomes, the poll says. 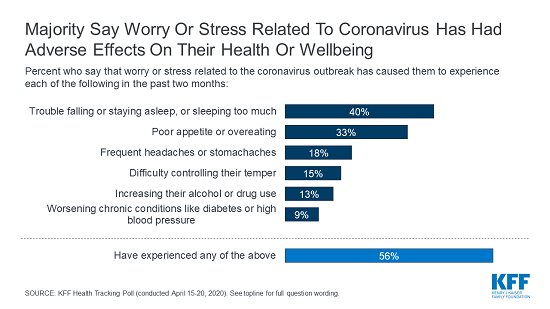 In addition to those who personally experienced a coronavirus-related job or income loss, 16 percent say they have a spouse or partner who has lost their job, had hours reduced, took pay cut, or been furloughed. In total, 42 percent of all U.S. adults say they or their spouse or partner has been affected in such ways.

For many, the loss of a job and income is affecting the ability to keep up with their bills, the poll says.

“The economy right now is crushing workers, and many are piling up bills and debts,” KFF President and CEO Drew Altman said. “Their optimism that things will turn around by the Fall may be wishful thinking.”

Nearly half (46 percent) of those in households that had a job or income loss since February say they have experienced at least one of those financial difficulties since then, the poll says.

Among the public at large, three in 10 (31 percent) report at least one of those financial difficulties as a result of the coronavirus pandemic. Those most likely to report such problem include black (57 percent) and Hispanic (42 percent) adults, those with low annual incomes at or below $40,000 (40 percent), and younger adults ages 18-29 (39 percent).

In spite of the job setbacks and financial troubles, affected workers are mostly optimistic that things will return to normal for them this year. Eight in 10 (83 percent) of those affected say they expect to be hired back, return to their previous salary or income, or get their hours back in the next six months.

Among the public overall, more than half (56 percent) say that worry and stress related to the coronavirus situation are leaving some marks on their mental and physical well-being, the poll says.

This includes four in 10 who cite problems with their sleep and one in three who report overeating or a loss of appetite. Smaller shares say coronavirus worry or stress is causing frequent headaches or stomachaches (18 percent), difficulty controlling their temper (15 percent), increased alcohol or drug use (13 percent), or worsening chronic health conditions (nine percent). 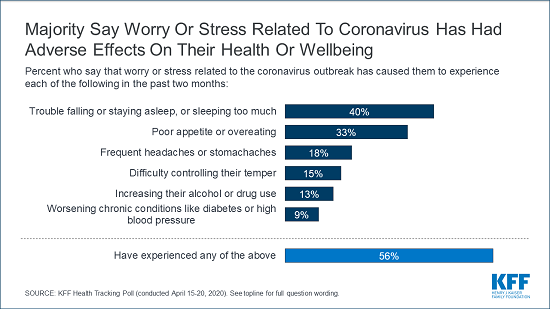 The coronavirus outbreak’s impact on mental health and well-being also seems to be affecting a larger share of those who experienced a loss of employment income, the poll says.

Two-thirds of those who say they or their spouse have lost their job or income (65 percent) say that worry or stress related to the coronavirus outbreak has caused them to experience at least one adverse effect on their mental or physical health in the past two months.

Most Americans Expect a Recession Due to Coronavirus

Survey: Realities of a Remote Workforce Increase Cybersecurity Concerns for Half of All Small Business Owners, But Policies, Training Still Lag