With coronavirus cases rising and businesses shutting down, four in 10 (39%) U.S. residents say they already have lost a job or income due to the crisis, the latest KFF Health Tracking Poll finds. This includes most part-time workers (54%), as well as nearly half of parents with children under age 18 (47%) and those paid hourly or by the job (45%).

A large majority (82%) also report that they are sheltering-in-place and not leaving their homes except for essential needs such as food and medical care as most states have ordered or recommend. And nearly everyone (92%) now reports some kind of social distancing, such as cancelling travel plans and not attending large gatherings – up from 59% two weeks ago.

Fielded March 25-30, the poll finds that Americans are already reporting significant pandemic-related problems as the crisis disrupts their lives and threatens their health and finances:

“Most Americans are taking steps recommended by public health experts to protect themselves, and Republicans are now getting the message,” KFF President and CEO Drew Altman said.

The poll finds a dramatic increase in the share of adults who report taking precautions or making preparations in response to the coronavirus pandemic. Three-fourths (75%) say they stayed home instead of going to work, school, or other regular activities – roughly triple the share who said say two weeks ago.

Seven in 10 (69%) now say they have decided not to travel or changed travel plans. Two-thirds (66%) say they canceled plans to attend large gatherings, and six in 10 say they have stocked up on items like food, household supplies, or medications. In each case, the shares are substantially higher than reported two weeks ago.

Similar shares of Democrats (95%), independents (91%) and Republicans (91%) now report engaging in some form of social distancing – a significant shift since two weeks ago, when Republicans were less likely to say they were doing at least one of these things.

Importantly, those over age 60 and those with chronic conditions – two groups considered at high risk of developing COVID-19 complications – report taking these precautions at similar levels as the overall population. 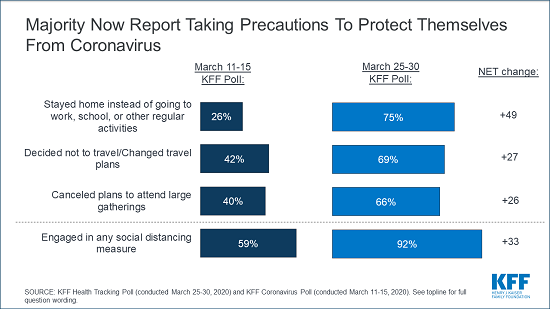 In spite of the health, social and economic upheaval that Americans are already experiencing, about three in four (74%) say that the “worst is yet to come.”  The public has significant coronavirus-related worries related to their family’s health and wellbeing, as well as concerns for the nation and the health care system:

In spite of concerns about its impact on the nation’s economy, a large majority (80%) say “the U.S. should take measures aimed at slowing the spread of the coronavirus while more widespread testing becomes available, even if that means many businesses will have to stay closed.”

Far fewer (14%) say “the U.S. should ease up on measures aimed at slowing the spread of the coronavirus soon, in order to open business and get the U.S. economy going again, even if that means more people would get coronavirus and could die.”