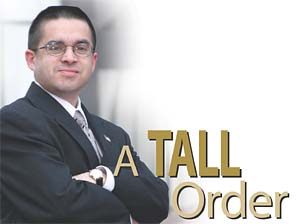 After a stint in the Marine Corps, Carlos Villerreal started his security career as an armed bank officer. Today’s security technology was just peeking over the horizon but he was struck by what could be accomplished with alarms, door access and video. When he moved into multi-tenant facility security, there was a building boom changing the skyline of big cities such as Chicago.

Skylines clouded up with new threats to tall buildings and trophy properties.

Taking his new orders even more seriously, Villerreal has met the challenges, being named recipient of the Lindberg Bell Security Man of the Year by his fellow members of the Illinois Security Chiefs Association.

Villerreal works for Trizec Properties Inc., which manages America’s tallest building for owner MetLife. His accomplishments and expanded, focused view of the evolving security assignment reflect a vision shared by many security executives.

Annually, the Lindberg award recognizes a security professional who has implemented an outstanding safety, security or healthcare program. The winner is selected after an evaluation of criteria such as levels of service provided, demonstrated security program enhancements, results of changes to the program and cost savings.

When Villarreal was discharged from the Marines in 1980, he returned to Chicago with an interest in police work, joining the in-house security staff at Continental Illinois National Bank, one of the Midwest’s major financial institutions at that time. “Technology was just coming around – cameras and alarm systems, for example,” he said. Mirroring an outsourcing banking trend in the mid-1980s, that organization went to contract security and Villarreal went to commercial real estate security.

Today, as director of security and safety at Sears Tower, he not only has influenced best practices at his own property, but is a valuable security consultant to Trizec, which has a portfolio of more than 60 office properties in seven major North American cities.

“It’s all very challenging and carries a tremendous amount of responsibility,” he admits.

In many ways, the key element, Villarreal believes, is to create and maintain a balanced program. “There is never any doubt: Security and life safety are of utmost importance,” he said. “At the same time, you need to seek out the efficiencies that go into the processes for security and life safety. In our case, tenants, clients and guests need not wait in long lines. Security should be seamless to them.”

That means the security operation must balance technology and people.

Still, times have changed for facilities such as the Sears Tower after Sept. 11. Emphasis has been shifted towards the concerns of safety as opposed to convenience. Villarreal oversaw a complete, expedited review of security procedures following the tragic terrorist attacks. The result, according to his employer and colleagues, is a meaningful security screening and access control program that keeps the bustling Tower operating efficiently and safely.

“As a country, we need to recognize and respond to new threats,” Villarreal said. He contends that the response to such threats must be coordinated among organizations, security operations, law enforcement, and local, state, federal and even international agencies. “We are all in this together,” he said.

Training and awareness are more important today, too. “Security personnel must have those skills, intelligence and equipment needed to do their work. Can we respond to events? Are we ready right now? It’s important to identify issues and respond to them appropriately,” Villarreal said.

The security and safety operation at Sears Tower spends “a lot of time training our tenants – things like how to get out of a public building in case of an emergency,” he said.

In and around Sears Tower, which sits on the west side of Chicago’s downtown business district, life safety is both standalone and integrated into the building’s mechanical systems. There is a network of outdoor and indoor security video. “The new advances are digital, computer-based recording with instant playback. There is a mixture of pan-tilt-zoom cameras and zoom cameras,” Villarreal said. He also noted that electronic access control systems will play an even bigger role in the future.

In densely populated areas like downtown Chicago, the collection of security video and access control data leads naturally to more sharing among government and private building security departments as well as the police. “Should something happen, we can share that information with our neighbors very quickly.”

Through organizations including the Building Owners and Managers Association, the sharing has been institutionalized. “We have a security committee [representing properties in the downtown area],” Villarreal said. “Security directors from commercial properties meet once a month and interact with law enforcement and joint terrorist task forces on the city, state and federal levels.”

Among the accomplishments of the group, Villarreal described an e-mail-based broadcast system that gets the word out on incidents and also may include security video images. He also pointed to another successful project, in which critical building and security information was placed on a CD and provided to Chicago city officials.

“Prior to the CD, each facility had written information,” he said. Pushing the computer-based data to first responders and crisis management officials, he believes, will speed up more intelligent response.

Villarreal also posed some important questions with which he has had to wrestle. “If the Homeland Security alert level should move to ‘red,’ how does that impact the commercial real estate sector? And should different properties at different locations and with different types of tenants react differently?” he asked. Addressing such considerations is a daunting task, but the Security Man of the Year is up to the task.

The building houses 100 different tenant companies, with about 10,000 workers.

The Sears Tower’s public areas, most notably the Skydeck on the 103rd floor, attract more than 1 million visitors annually.

Sidebar: From Fires to Heart Attacks

North America’s tallest building, the Sears Tower, has the right to staff, train and buy equipment to protect it from and to handle terrorist attacks. But in this and other large facilities – view them as mini-communities – there’s also the need to prepare for fires and medical emergencies.

The vast majority of fire deaths and injuries are in homes and not workplaces. However, when fire and smoke incidents happen in high rise buildings, there is an understandable attention to life safety programs. In mid-October 2003, a fire in the 12th floor supply room of the Cook County Administration Building in Chicago killed six people. The cause of the fire in the 37-story downtown building still is under investigation, and questions remain concerning the building’s management life safety procedures as well as the activities of first responders, according to Claude Hollyfield, director of training for YSG Door Security Consultants.

Rick Mulhaupt, president of the National Fire Protection Association Research Foundation, added, “for most of the history of fire science and fire safety, our efforts have focused on how much smoke would kill a person. Now, we’re recognizing that many people die in fires – not because smoke killed them on the spot – but because smoke or heat prevented them from getting out of the building.”

Hollyfield will explore the Chicago incident and intelligent life safety responses in an upcoming issue of Security magazine.

In yet another life safety movement, many public buildings, facilities in downtown areas, train stations and schools have started installing automated external difibulators (AEDs). Capable of being operated by almost anyone, the AEDs can save lives by providing attention even before emergency medical technicians arrive on the scene.