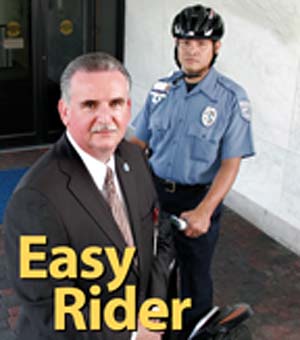 Michael Parks sought a way for his security officers to patrol a “very open campus” inside and outside as well as areas of construction. Similar to other facilities that mix employees with the public, Parks also wanted ways to meet a public relations mission of the security operation.

As security director at Sinai Hospital and Levindale Hebrew Geriatric Center and Hospital, Baltimore, Md., Parks found a unique solution – the two-wheel, new-age Segway Human Transporter. With that, the Security department at the hospitals’ regional healthcare organization, LifeBridge Health, became one of the first in the country and the first in Maryland to use Segways, as high-tech patrol devices in a healthcare environment.

Security at the hospitals must meet a high-level mission. According to Parks, the combined facilities constitute one of America’s largest Jewish hospital campuses. In addition to more typical threats, “terrorism is a consideration,” said Parks. Through the office of the vice president of campus services, LifeBridge Health won a homeland security grant that allowed for the purchase of three Segways.

Security at LifeBridge Health facilities includes digital security video as well as proximity-based electronic access controls. There are bollards at some key areas, too.

Officers on Segways complement the security video, intrusion and electronic access control systems, which make up an integrated security picture.

But it is the Segways that catch the eye, thanks to their unusual design and past media attention.

When first introduced, Segway coverage often centered on consumers tooling down a city street. But, according to Klee Kleber, vice president of marketing at Segway, security has always been a part of the strategy. “Over the last couple of years, about one half of the business has been institutional, including police departments and airports as well as healthcare, university, corporate, hotel and resort security.

Kleber added that the company has about 90 independent dealers as well as an in-house national accounts program for multi-location customers.

While the transporters patrol outdoors, after regular hospital hours, officers go inside the facility to interact with employees.
“The Segways allow the security staff to cover three times the area an officer on foot could patrol,” said Parks. “The high visibility will act as a deterrent to unwanted activity and provide faster response to emergency situations on our campuses.”

The hospital now has four of the machines, one with all-terrain capability to manage construction areas on the ever-improving campuses. All are equipped with headlamps and taillights for nighttime use. In addition to using the high-tech machines to patrol the outside of the Sinai and Levindale campuses, security brings the Segways inside during evening and night shifts when there is less pedestrian traffic in the hallways.

The operation stresses what Michael Parks calls family-centered care. For example, sometimes a patient’s loved ones will spend the night. The flipside: often there are some people in the hospital during non-visit hours. So a Segway patrol inside the facility off-hours can more quickly get to a situation and provide a security and public relations need.

“The product was designed to be social in nature,” said Kleber. Officers on it are more approachable, he maintains.

“The transporters can easily maneuver both inside and outside of buildings, on elevators, along sidewalks, on parking lots, or in garages,” added Parks, who served on the Baltimore Police Department for more than three decades before coming to LifeBridge Health. The uniquely designed and quiet, almost stealth-like machines are easily portable and can be used at any of the LifeBridge Health facilities.

Segway’s Kleber sees other advantages, too. “It self-balances and turns in place while only taking the space of a single person. A security officer can stand eight inches taller.” There are no emission problems and a breakthrough battery technology will extent miles traveled per battery charge.

Parks is pleased with the transporters. They are very visible and can coverage a wide range, especially helpful with a total of 80 acres of patrol commitment. In addition, the all-terrain model can traverse areas of construction, thanks to a wider wheelbase and wider set of tires. A local Segway dealer provided training; but, said Parks, the machines are not difficult to operate.

Added Kleber, customization can include cargo and bag structures, paint on fenders, added wheel disks, fixed hubs and spinners, skins and Plexiglas shields as well as the ability to add messages or advertising to the front panel.

More basically, quick response was an essential feature of the transporters, according to Parks.

Richard McPherson, director of safety and security at the Westin Kierland Resort & Spa, agrees. On 730 acres in the heart of Scottsdale, Ariz., the luxury property has three, nine-hole golf courses, a full-service spa, kids club, eight restaurants, more than 170,000 square feet of meeting space and more than 700 guest rooms, plus a separate vacation ownership property.

“It did not take long before we found that the Segway was the ideal way to respond to guest calls, such as when they have misplaced their card key or it has become demagnetized,” said McPherson. “It not only gets us to the guests quickly, but it also leaves them with the impression that we care about expediting their request. It increases our efficiency and enhances our image.”

To evaluate one aspect of its effectiveness, McPherson’s group studied response times. “We looked at every security response to a guest call during the last six months of 2004, when we did not use the Segway. During that time it took us an average of 12 minutes to respond to each call,” said McPherson. “We then compared that with the first few months of 2005, when we were using the Segway, and found that we reduced the average response time to seven minutes. When you consider that we respond to 1,500 calls each month that is a huge improvement in our ability to serve our guests.”

Speed and versatility are important for the Duke University Police, too.

With parking lots and garages as a security challenge, officers on transporters can quickly get to the scene of a call as well as see over many cars for a better view.

Still, Chief Clarence Birkhead believes that the transporters nicely complement the other forms of transit for the commissioned and non-commissioned officers on his force as well as make officers more accessible.

Community service officers and uniformed officers use the units. “When you put an officer in full uniform on a Segway,” said Birkhead, “It makes him very visible. Students and visitors will come up and talk to the officer about the unit. They want to know what it is and how to use it. They even have their photos taken next to the officer. So, I would say that it has accomplished at least one of our goals which was to make us more accessible.”

Lieutenant Tony Shipman is the officer in charge of the Segways at Duke.

“They have become just another tool for us, in the same way we use our cruisers and our bike patrols,” commented Shipman. “We use them on the main quad of the east and west campuses and around the residential halls because they can get places where our cruisers can’t go. I used one this week to test all of the emergency telephones that are spread throughout the campus. I could ride right up to the phone, test it without stepping off the unit, then move on to the next phone.”

Intrado, a company that provides the technology and infrastructure for the North American 911 call systems, sees a life safety value in the transporters.

According to Brad Leach, director of corporate security, the Intrado security team uses them every day, all day long. “Our goal is to be at each checkpoint in the facility at least once each hour. This year we’re adding a laptop monitoring system that will tell the patrol officers exactly where an alarm is sounding so they can respond immediately from anywhere in the facility,” said Leach. “This system will also give us a log that summarizes where the activity has been each day.”