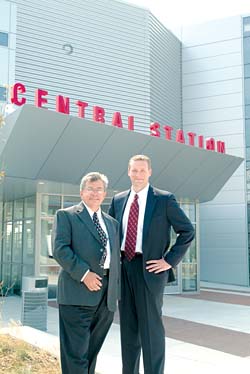 Teamwork between Interurban Transit Partnership Executive Director Peter Varga and Progressive AE Communications Engineer Bret Emerson helped smooth introduction of new security technology.
Growing for years, the public bus system in Grand Rapids, Mich., known as The Rapid, had outpaced its existing transit station located just north of downtown. With ridership at an all time high and the need for updated services increasing, the time had come to build a new central station that would consist of a bus transfer platform and adjoining multi-use building.

The Rapid’s governing body, the Interurban Transit Partnership (ITP) and its Executive Director Peter Varga knew that to keep loyal riders and continue growth, the new central station would have to impress riders, while also providing a safe and secure environment. "Rider safety is one of our primary goals throughout the bus system. By starting from scratch with the central station structures, we knew we would have the opportunity to introduce new security systems into the new buildings and hoped we could also add them into our existing buildings," said Varga.

To help reach goals for the new central station structures, ITP hired Progressive AE of Grand Rapids as design architect/engineer. That company’s project architect, Jim Vander Molen, noted, "After meeting with the ITP staff, we realized that along with designing the building, the telephone system, data network and audio/video systems, the most important communications system would be the access control/intrusion detection and video security systems."

A total of four buildings needed to be secured and monitored. These included the new buildings of the central station and two existing buildings. The new buildings would consist of an open-air transfer platform with a tensioned fabric-membrane canopy to serves the riders of up to 17 buses at a time, and the central station building, which include office space for ITP administrators, ticketing, vendor space, a community/boardroom and house the offices for Greyhound. The existing buildings would include an administration building located next to the new central station and a bus storage and maintenance building located four blocks away.

ITP decided that the security system would not be useful unless it allowed all of the buildings to monitor access, set schedules for locking and unlocking and provide video coverage of the areas in and around the whole campus.

Getting the access control and video security components in every building to talk to the head-end equipment in the central station building was the first issue that arose.

"We wanted to monitor all the buildings, but we wanted to do it from a central location," said Varga. When taking these requirements into account, Progressive AE noted that ITP already had a redundant fiber-optic cable ring installed and in use between the two existing buildings. As part of the project, one of the fibers from the maintenance building to the administration building was re-routed so that it connected the maintenance building to the central station. A new fiber from the central station to the administration building was installed, thus keeping the redundancy of the fiber-optic ring and adding one more building.

Through the design process, it became apparent that there would be two main components to the security system: one system for access control and intrusion detection, and one system for video security. While these would be separate systems, they would have to interoperate to take full advantage of their potential.

Both systems were fully designed and integrated into the architectural drawings of the new and existing systems. Using the architect’s drawings, the security designer was able to pinpoint locations for the conduits and back-boxes for the card readers, and get the doors prepped by the electrician for raceways to allow for electric strikes, door contacts and request-to-exit motion sensors.

Above, infrastructure is an important element of the security and communications design at the Grand Rapids bus station. Columns on the Central Station platform hold lighting, audio and security video cameras with the latter attached to a pullbox allowing all cables to route through the structural column.<

With complete design drawings and CSI Division 17000-based specifications, the security contract was put out for bid. When the bids came back, a local Grand Rapids security company, SecurAlarm Systems, was chosen based on being in-line with the specifications, cost structure and a company history of providing a quality installation within budget. The solution provided the Bosch Security Systems (Fairport, N.Y.) ReadyKey Pro as the access control/intrusion detection system and Pelco (Clovis, Calif.) for the video security system.

"We were excited to be part of the project and be working on a cornerstone building of the renewal in downtown Grand Rapids," said Gloria Lubben, executive vice president of SecurAlarm.

The security system design required the contractor to implement an access control/intrusion detection system that would be able to lock and unlock the buildings at specified times, provide access to people with approved proximity ID cards and provide alarming at exterior doors if they were opened from the outside whenever the building was locked up.

All exterior doors would have door contacts and request-to-exit motion sensors to shunt the alarm when anyone left the building after hours. Many of the exterior doors would be equipped with card readers that would allow employees access whenever they wanted, but their entry would be recorded based on the proximity card provided.

ITP wanted the new ID cards to be able to be used for multiple systems such as access, time clocks and later for integration into their Smart Transportation System, which would be implemented in the next two years. It was decided that a 26-bit Wiegand proximity card would be provided for all employees. The contractor would be responsible for providing proximity cards that included each employee’s name, employment number and photograph. These cards would take the place of their existing ID cards.

"We knew that the ReadyKey Pro system was just the right product to integrate with the video system, provide access cards that would integrate with the future Smart Transportation System, while giving ITP the monitoring and record-keeping they asked for," said Lubben. "The access control system allows us to move a camera to cover an exterior door when a card is presented at the card reader."

Video security had to coordinate with the plan for the access control/intrusion detection system. It had to be implemented in the new central station buildings as well as being installed into the existing administration and maintenance buildings. Once again, ITP would be able to use the fiber ring between the buildings for transmission of the video and camera control signals.

The overall installation included 48 cameras that are associated with three 16 port digital video recorders (DVRs), all housed in the security office.

"The client wanted video security cameras all around, but we wanted to make them as unobtrusive as possible," said Vander Molen. "SecurAlarm was able to provide camera housings that matched the building exterior by installing the Pelco Series III cameras. One of the exterior housings was painted to match the masonry we used on the side of the building."

Of the 48 cameras, 21 would be under the canopy of the transfer platform, and six others would cover the drive and areas around the canopy. The other 21 cameras in the system would be distributed between the maintenance building and the interior of the central station building. Exterior cameras would utilize fiber cable to transmit their signals back to the fiber-to-coax transceivers, located in the cabinet in the security office.

When the original specifications were completed, the design of the DVR was based on the Pelco 7000 series. As construction progressed, Pelco introduced an 8000 series. SecurAlarm had the opportunity to change the product to the 8000 prior to completion of the installation.

The DVRs were installed along with a video matrix switcher, three 21-inch LCD screens and two 21-inch analog monitors. The LCD screens would be used to view each group of 16 cameras, while the two analog monitors would take the feed from the matrix switcher, displaying an operator-chosen image or one of 54 preset alarm call-ups that would automatically display images from the 26 pan/tilt/zoom (PTZ) cameras during an alarm.

"We have dedicated security officers that man the security office as well as walk the platform," said Varga. "By having someone monitoring the security cameras we are able to take full advantage of the PTZ aspects of the cameras and track potential incidents."

As with most projects, the installation was tight and tricky. With so many cameras, door contacts, electric strikes and request-to-exit sensors being installed in each building, making sure that each component was installed at the correct location was quite a job. The contractor had to contend with working in and around four different buildings, each with different day-to-day schedules and different staff groups.

The complete security system drawings, which showed the equipment at each door, provided Lubben and her crew a roadmap throughout the installation process, allowing them to quickly check the correct locations of cameras and security components.

"With many of these projects we, as the security contractor, get involved after construction has started and essentially retrofit our equipment into the building," said Lubben. "ITP did the smart thing in hiring Progressive AE to work with them on the security system design and integrating those systems into the overall architectural package."

At the grand opening of the central station buildings, the video security system was recording all 48 cameras; all 300 employees had new ID cards that allowed them access to all the buildings and bus riders could feel happy that they were secure, thanks to the efforts of ITP officials, the engineers and contractors.