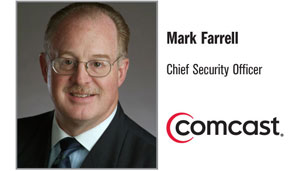 Several busy andeventful days had just concluded for Mark Farrell, CSO at Comcast Corporation. The Montgomery County Pennsylvania District Attorney’s Office had just released the news that a major fraud investigation had resulted in the arrest of six people, including the alleged ringleader, and that arrest warrants had been issued for 17 other individuals believed to have served as agents in a scam to provide unauthorized, discounted cable services to thousands of Comcast customers in exchange for a one-time cash payment.

“During an audit, Comcast had discovered some unusual promotional adjustments that raised concerns and one of the alleged agents unknowingly actually tried to solicit one of our employees who reported it to us,” says Farrell. “In conjunction with our internal investigation, we worked with the DA’s office and this turned out to be a great example of public/private cooperation to investigate, collect evidence and get to the bottom of the fraud.”

This is just one recent example of Comcast Security’s business-focused organization. “The company is decentralized, so we have different teams that report into my office. Comcast is one of the world’s leading media and technology companies, and we work to address the critical issues each of its businesses face through a consistent set of policies and processes,” explains Farrell.

Farrell and his team oversee systems to protect the company’s employees so they are able to do their jobs in a safe environment.

For example, Comcast recently acquired NBCUniversal, which owns and operates entertainment and news cable networks, the NBC and Telemundo broadcast networks, local television station groups, television production operations, a major motion picture company and theme parks. Farrell works closely with their security leadership to standardize policy, oversight and investigations and to align programs and move toward a single measurement tool, such as the use of an incident tracking program.

“Our critical issues are to protect people, assets and processes. The best way to accomplish that is through gap analysis to identify vulnerabilities and work our processes to eliminate gaps. This enables our employees to be secure and the business to successfully create and deliver products and services to our customers,” says Farrell. “We use a lot of metrics to show value, such as our investigations/tracking tool. It has been so successful that we now use it in other departments to help with benchmarking and gap analysis across the company.”

“Our value proposition is as an independent, reliable group that conducts quality investigations the company can depend upon. We uncover gaps and risks and assist to mitigate them. We create value by getting in front of risk,” he shares.

Examples of Security’s positive impact include travel and investigations. Security supports employee travel with experience and expertise in documentation, go/no go hotels and areas and cultural protocol. Similarly, investigations are centralized across the organization so similarities and patterns in losses are recognized and gaps can be addressed more quickly.

“Our two key metrics are the safety and security of our people and the identification and elimination of risks,” says Farrell. “Security is expected to be constantly and consistently available, so we are thoughtful regarding the processes we implement and that we assist senior management with unexpected issues.”

“Every CEO should insist that Security is integrated into every part of the business. Security is every employee’s responsibility, and our employee who reported the fraud scheme is an outstanding example of that,” he says.

Another example of cooperation and business alignment can be found in the lobby of the Comcast Center. Brian L. Roberts, Comcast Chairman and CEO, wanted the guests to receive the same welcome they would when walking into a four star hotel. Farrell’s can-do attitude kicked in and the Ambassador program was born. He recruited graduates with hospitality degrees and interests. In addition to their “uniforms” being suits from a leading clothier, they were trained in security, emergency preparedness and safety. The program is a great success for the brand and the bottom line (read ‘article name’ on securitymagazine.com for more details).

“Comcast is a dynamic and progressive company, which makes coming to work a great pleasure. I love the opportunity to solve problems in this highly ethical and respectful culture,” he says.

A father of three children and grandfather of three, he is an avid skier and boater. He also has a passion for home remodeling. Prior to joining Comcast in 2006, he worked at the Delaware North Companies for 15 years. Prior to his time at Delaware North, Farrell spent 18 years in law enforcement, including eight years with the United States Secret Service.

If Farrell were not a CSO, he would work with Habitat for Humanity building homes or assist senior citizens who are not able to fix their own homes.

- Internet Fraud and Other IT Issues

- Moving from Decentralized to Centralized

Security 500 Trends: Thanks for Nothing