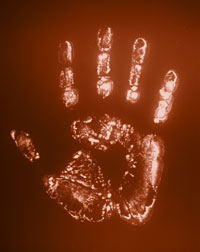 To realize the full capabilities of outdoor thermal imagery, a camera must reveal what the human eye would miss. Intelligent image processing inside new cost-effective and durable thermal cameras is the key to revealing objects that might otherwise blend into the background. Intelligent image processing also makes thermal images look like a black-and-white video, which is more natural to the eye and can lower operator fatigue.

Thermal cameras operate by sensing heat energy from objects and converting the temperatures of objects into video shades of gray that are darker or lighter than the background. This is why thermal cameras are best known for “seeing in the dark” because at night background objects tend to be cooler than a person. Under ideal conditions, people are well emphasized at night because they appear brighter in the image than the background, even in total darkness.

However, daytime applications have historically presented challenges for thermal cameras. Recent developments in image processing now take outdoor security to a whole new level with clearer thermal images both at night and during the day. Thermal cameras now operate among environmental factors such as rain, humidity, fog and bright sun, which in the past yielded poor images.

Consider the situation of an asphalt parking lot, which gets really hot during the day as it absorbs heat from the sun. After sundown, the asphalt cools over time, eventually coming very close to the body temperature of an intruder. With previous generation thermal cameras, the intruder would disappear into the background, leaving a gap in security coverage.

This same principle of “thermal crossover” also applies to buildings and other large objects that are heated all day and cool at night. The result has been several periods every day when normal outdoor conditions camouflage an intruder.

Recent advancements in the sensitivity of thermal imagers, combined with sophisticated image processing, can now present clearer thermal images regardless of these conditions.

Thermal imagery is very rich in data, sensing small temperature variations down to 1/20th of a degree. Thermal cameras must convert these fine temperature variations – representing 16,384 shades of gray – into about 250 gray scales to more closely match the capability of human vision to decipher shades of gray. In the past, most thermal cameras converted this data in a simplistic way by mapping gross areas together that are close in temperature. This is why thermal images often look blurry, lack detail and conceal intruders.

A better way to perform the conversion is to use a very high degree of video processing. Such processing can be used to emphasize small variations between objects and the background to exaggerate the fine details and present a clearer image in contrast to other image features. Doing so can reveal critical security information, and extend the value of outdoor thermal cameras for 24 hour use.

New cameras with a high-level of image processing can translate the large amount of thermal information into high-contrast images that approach black-and-white video quality. This addresses the previous challenges and provides superior thermal images under outdoor conditions, every day, every night, under all outdoor conditions.