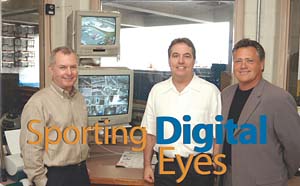 Dome cameras mounted inside the arena allow security personnel to monitor the crowd while identifying specific seats within the arena.
Sporting dome cameras, digital video recorders and a flexible matrix system, a major Southern California arena protects spectators, teams and the facility without the burden of additional patrolling security officers.

The Arrowhead Pond, a premier entertainment and sports venue located in Anaheim, Calif. and boasting a 650,000-square-foot arena facility, hosts a variety of first-class events each year including concerts, sporting events and family shows. It is home to both the NHL’s Mighty Ducks and the National Lacrosse League’s Anaheim Storm. Arrowhead Pond also hosts the prestigious John R. Wooden Classic, and stages numerous annual events including the Ringling Bros. and Barnum & Bailey Circus, World Wrestling Entertainment and the Harlem Globetrotters.

The facility’s reputation and continued efforts to maintain a family-oriented entertainment environment is largely the responsibility of the security staff operating under the direction of Russell Beecher, Arrowhead Pond’s security/public safety manager. Beecher and his staff rely on a high-performance video security and surveillance system to help maintain a vigilant watch over the facility and the property surrounding the facility. The system and major components are from Panasonic of Secaucus, N.J.

Ken Jacobs, president and CEO of JMG Security Systems, Fountain Valley, Calif., has been with the security systems at the Arrowhead Pond since construction of the massive facility began in 1991. "We got involved early with the contractors by securing their trailers. JMG was a fairly young company at the time and we worked real hard to get on the bid list," said Jacobs.

Mounted atop the facility, the domes are equivalent to placing security guards every 25 feet or 30 feet across the parking lots, according to Russell Beecher. Four Panasonic WV-CW864 Outdoor Dome Camera Systems mounted on the roof of Arrowhead Pond provide 360 degree coverage of the building’s exterior and complete coverage of the parking lots. Below, Panasonic’s Matrix System 500 provides security with the processing power to program multiple camera coverage sequences and automatically switch cameras in "Group", "Tour" or "Group Tour" sequences – all of which are recorded 24/7 on digital video recorders.

"The Arrowhead Pond’s management didn’t want a security consultant, so we were working with the original general manager of the facility," said Jacobs. "They did not have a security plan but wanted to work directly with a systems installer, so they received several design-build proposals. We came in with Panasonic and helped recommend and design a system. Panasonic was instrumental in helping us prepare demonstrations for this project. This was a very visible project and every big company and integrator in the country wanted the project, but we made the final cut and were selected for the job.

"We started running cable as the frame of the building was going up and completed the original system when the facility opened in 1993. Since then, the system has been upgraded to include Panasonic digital video recorders, dome camera systems and the Matrix System 550," said Jacobs. "The system has been enhanced to provide complete coverage of the parking facilities using four WV-CW864 Dome Camera Systems mounted on the roof. With these four cameras, we achieve 360 degree coverage of the building’s exterior and complete coverage of the parking lots."

Beecher, who has been with Arrowhead Pond for over two years, is happy with the result. "The dome cameras have been impressive since day one," he said. "Over time, we’ve had to make some adjustments as the palm trees continued to grow taller and obscure certain areas, but we have repositioned cameras to maximize our coverage. The picture quality is excellent – very clear even when zooming in on distant objects. They are excellent."

"The cameras are invaluable to the parking lot area," continued Beecher. "They are invaluable when we have minor hit and runs. We determine the approximate time that the incident occurred and identify a vehicle, or if we catch it live, we will actually wait for the car to drive away and zoom in on the license plate. Then we simply give the information to the police and they proceed with their investigation. It also helps us counter false claims of activity in the parking lot where the cameras have proved that nothing occurred. We just don’t have the man power to place a guard every 25 feet or 30 feet across, but the cameras give us that ability electronically."

The Anaheim Police Department also uses Arrowhead Pond’s surveillance system to keep an eye out for suspicious activity. A second control location is available to the police where they can control cameras for spot surveillance. The dome cameras allow them to zoom in and closely monitor suspicious activity outside the facility when events are being held. This allows the police officers in the control room to communicate and direct officers patrolling the perimeter of the Arrowhead Pond to specific locations with specific descriptions of suspects.

The facility’s Matrix System 550 controls all camera feeds, monitoring assignments and the recorders used to cover the facility. It operates on a digital driven platform using a building block of 128 camera inputs, 16 monitor outputs and eight control locations. The system’s extensive camera processing capabilities allow Beecher to program multiple camera coverage sequences and automatically switch cameras in Group, Tour or Group Tour sequences. Events can also be programmed to combine camera-monitor selections with automated sequences and automatically triggered by time/date programming, alarm activation or manually by an operator. The system can also be programmed to respond to alarms from the domes.

All cameras are recorded 24/7 on the facility’s digital video recorders, network configured so the units can be controlled from any location. "The network also allows me to call up any DVR and camera recording from home or any remote location," noted Beecher. "If I have a particular concern and can’t physically be at the facility, I have the flexibility to access the system from virtually anywhere.

"We also use the dome cameras inside the arena. Our staff has the ability with just four cameras to monitor the whole crowd. We can literally pick up any seat in the building. JMG worked closely with Panasonic’s team to determine the best locations for the dome systems. If anything goes on the ice during a hockey game for example, we take immediate action. Professional hockey players are worth millions of dollars, and we don’t want them to get injured because something’s been thrown on the ice. Kids are kids and they love to throw paper airplanes. As soon as we see the first paper airplane hit the ice, we send a security person to the area and address the situation."

"We strive to maintain a family atmosphere, but you sometimes get fans using profanity," added Beecher. "If we get a complaint, we can positively identify who is causing the problem and dispatch our staff to issue a warning. Then we watch the offenders with the cameras to make sure they comply. If they continue, we send ushers and the security personnel to remove them. We understand that crowds can get enthusiastic at hockey games, but we try to make sure they always stay under control.

"The lights are turned down during most of our events – especially during concerts where it can be very dark in the seating areas. With the Super Dynamic performance, we can still monitor the crowd and get a clear indication if there’s a problem in the stands, although our biggest concerns are generally with the exterior of the facility during concerts."

Critical areas are also monitored using the domes. "There is a lot of valuable property in this building. When a concert crew comes in, for example, they bring in specialty merchandise and we keep it under surveillance until it is distributed for sale. It’s very effective," said Beecher. "[The domes] are mounted at the Southeast entrance, which is the main entrance for daily business Monday through Friday. When someone wishes to gain entry, they ring the bell and our system operator can zoom in with a camera to see who is at the door and speak with them through the intercom. The cameras allow us to keep a good record of who enters the facility. Overall, the Panasonic Video Surveillance System has proven to be an excellent tool for our security staff here at the Arrowhead Pond."