Why swift action is key to securing the hybrid workforce

Many security teams are still playing catch up on the risks introduced by technologies that were rapidly implemented and poorly vetted during the pandemic, while also being forced to stretch resources to counter increasingly frequent sophisticated attacks. As we edge closer to the reality of hybrid work, it’s critical that security teams begin rigorously preparing. 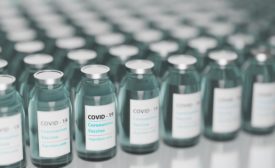 Kevin Brown
As pharmaceutical companies and healthcare organizations turn their attention from the development to the deployment of coronavirus vaccines, well-resourced cybercriminals are hotly following suit. The vaccine supply chain is rife with logistical complexities making the enormously valuable data on the various vaccines deeply attractive to threat actors. In fact, cybercriminals are already attempting to steal vaccine formulas and disrupt operations.
Read More
Subscribe For Free!
More Videos

The Future of Physical Security Communication with Push-to-Talk 2.0

Security departments have long struggled to bring their real-time voice communications into the present, resorting to communicating with radios, unsecure applications, multiple devices, and Wi-Fi-only solutions.