This website requires certain cookies to work and uses other cookies to help you have the best experience. By visiting this website, certain cookies have already been set, which you may delete and block. By closing this message or continuing to use our site, you agree to the use of cookies. Visit our updated privacy and cookie policy to learn more.
Home » 7 things every CISO must know about ransomware
ManagementCyberSecurity Enterprise ServicesSecurity Leadership and ManagementLogical SecuritySecurity & Business ResilienceSecurity Education & TrainingCyber Security News

7 things every CISO must know about ransomware

Ransomware is one of the most prominent cybersecurity threats organizations face today. Any institution or company (small or large) can fall victim to ransomware – including schools, healthcare providers, educational facilities, non-profit entities, and government agencies. Cybercriminals that deploy ransomware attacks do not discriminate.

Thankfully, there are ways to protect your organization from ransomware attacks. In this article, you’ll discover everything you need to know about ransomware as a chief information security officer (CISO), from its evolution to preventative methods to prevention.

Some business leaders are taken aback by the term 'ransomware,' while others are aware but unprepared. The “ransom” part in the cyberattack name provides a good idea of what it’s all about. When a computer or network is attacked by ransomware, the malware encrypts data in the system or blocks access to it. Then the developers behind the attack will demand a ransom to decrypt files.

But how does it spread?

An organization’s system is typically infected by ransomware through phishing emails, attachments, or links. Hackers can also infect a system through unsafe websites and even an infected USB flash drive. Plus, clever attackers don’t deploy ransomware applications right away.

Instead, the network and assets are first analyzed to identify weaknesses before carrying out the actual attack. After all, the culprits need to ensure there are no boobytraps, and the business is even worth attacking.

As previously noted, in a ransomware attack, infected files are encrypted and rendered inaccessible until the attacker's demands are met. Think of your favorite hostage movie – that's sort of how it goes down with ransomware.

The victim will receive detailed instructions on how to pay the ransom. Payments are often requested in Bitcoin, ranging from hundreds to tens of thousands of dollars. After paying the ransom, the cybercriminal should restore access or decrypt the files, though that’s not necessarily the case.

There's no guarantee that the culprits will decrypt the files, and even if the developers do, nothing can prevent data duplication. Assets may be duplicated and auctioned off on the dark web anyway.

No CISO wants to be in a scenario where the private customer and business information is held hostage for ransom by cybercriminals. It's a scary thought, but it happens every day.

Ransomware attacks can differ in tactics, but the ransom request is always a factor. Here are the four main categories of ransomware you should know about, along with other closely related malware.

2. A Quick History of Ransomware

Did you know that the first ransomware attack took place in 1989?

Joseph Popp, a biologist, handed out 20,000 infected diskettes to attendees of the World Health Organization’s AIDS conference. The label of those disks read "AIDS Information - Introductory Diskettes." People who inserted the floppy disks received this message: 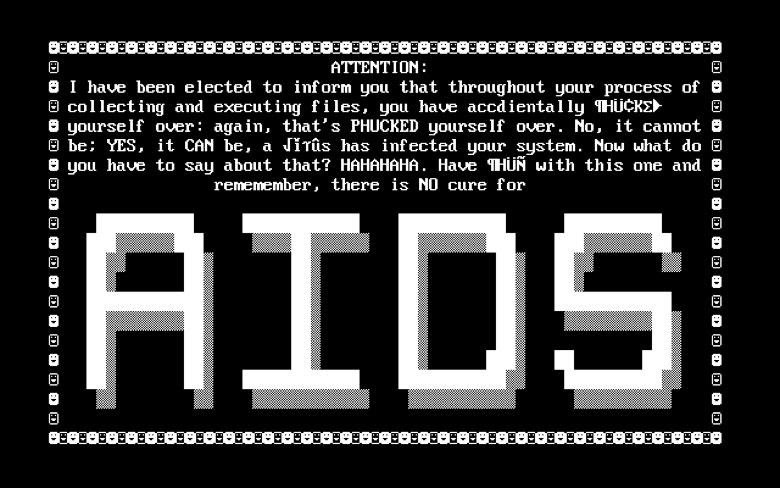 It was called the AIDS Trojan or PS Cyborg ransomware in some circles. Victims had to send $189 to the attacker at a PO Box in Panama. Fortunately, authorities caught the cybercriminal, and the program was easy to overcome since it used symmetric cryptography.

The traditional application of cryptography was never offensive. Its purpose was to provide more privacy to users and prevent loss of confidentiality or access to information. Today, “cryptovirology," the use of cryptography to build ransomware and other malicious software, is common among cybercriminals. Cryptovirology represents a conjunction of public and symmetric cryptographic techniques and Trojan horse technology. Every significant technological development comes with a degree of power, which can be abused or used as intended.

3. The Significance of Ransomware

Ransomware attacks account for 23 percent of malicious software or malware used to breach systems and networks. It was the number one data breach threat in 2020 for businesses and government agencies. Attacks on organizations increased 20 percent compared to the previous year, and researchers expect things to get worse.

According to some estimates, ransomware operations resulted in more than $1 billion ($1,005,186,000) in losses between 2019 and all of 2020 globally – though actual numbers are probably much more considerable. Alone, it’s estimated that one gang of ransomware operators earned $150 million worth of Bitcoin payments.

Specific markets are certainly more susceptible to attacks than others. Often the high-profile attacks occur in medical organizations because these institutions are more willing to pay the ransom. The second on the list of favorite targets is the financial services sector. Again, these companies have more to lose, hence, more willing to pay up.

Further, ransomware attacks are continuously being updated and tweaked by the developers. Because an organization can choose to recover data from backups instead of paying a ransom, many attackers now employ a “double-extortion” strategy.

That means attackers not only encrypt files and prevent access but also steal and threaten to make the information public if demands aren't met. Some malicious actors will auction off the data on the dark web. According to IBM Security, 59 percent of ransomware attacks used double-extortion.

Evolution is part of what makes ransomware a unique and severe cybersecurity threat to all sorts of organizations.

New variants of ransomware pop up regularly, so it’s challenging to keep track of all the different strains. However, they do rely on similar tactics. Therefore, it’s worth looking at the most widely used types of ransomware you might run into for preparation.

You may have heard of the infamous GandCrab ransomware family. Well, the attackers that made it are likely the distributors of Sodinokibi, cutting-edge and highly evasive ransomware. It takes several measures to avoid detection by security systems, such as antivirus scanners.

Nefilim was first discovered last year but quickly became a notable ransomware variant. The ransomware threatens to release the information of victims to the public if no ransom payment is made – double extortion.

The name Ryuk may sound familiar since it's the name of a fictional character from the popular anime Death Note. However, the name Ryuk is now also known as ransomware since its discovery in August 2018.

This is a fast-growing ransomware cybersecurity threat created by 'Circus Spider,' a cybercrime group. Netwalker is among the most dangerous ransomware ever made because it does more than hold the victim's data ransom.

Windows users should be anxious about Ragnar Locker ransomware, one of the more sophisticated threats.

The Maze ransomware targets organizations across many industries worldwide, and researchers believe it operates via an affiliate network. The scary thing about Maze is that it doesn't only penetrate an organization’s systems. The operators can take advantage of assets in one network and use that information to gain access to others. For example, if the affected company is an IT service provider, the developers may gain access to hundreds or even thousands more networks and computers.

Other ransomware variants are responsible for 42 percent of all data breaches, such as Egregor, CLOP, and Medusa. Many rely on similar tactics. Knowing about the most common variants in existence can help organizations prepare and defend against a potential breach.

RaaS drops the barrier to entry significantly. In the past, extensive coding knowledge was a prerequisite to becoming a hacker. Nowadays, anyone who meets the affiliate membership requirements can start wreaking havoc on unsuspecting victims. Affiliates receive high dividends for all successful ransom payments, and some groups pay affiliates up to 80 percent, such as Netwalker.

The most successful RaaS developers offer software with an incredibly high chance of success and capabilities that make it hard to discover. The profitability of RaaS adoption is on a continuous rise since it allows ransomware to affect more targets.

The best insights can come from observing past incidents.

In 2014, a hacker group named "Guardians of Peace" leaked confidential data from Sony Pictures. The attack was unusual because their request was for Sony to withdraw a somewhat controversial movie, "The Interview." It's undoubtedly one of the most well-documented ransomware attacks because it involved a huge media company, world leaders, and famous actors.

WannaCry is ransomware allegedly created by the United States National Security Agency but leaked by a cybercrime group named 'Shadow Brokers’ in 2017. The ransomware is best known for a devastating attack that hit 230,000 computers globally, causing $4 billion in losses worldwide. For example, WannaCry cost the UK National Health Service $92 million when it hit a third of hospital trusts.

Hackers targeted Travelex in 2020, successfully taking down all of the company’s websites across 30 countries. That caused chaos for foreign exchange transactions worldwide in January, forcing Travelex to pay $2.3 million in ransom.

In Colonie, New York, cybercriminals hacked into the computer system and demanded a $400,000 ransom in Bitcoin to unlock it. Fortunately, the town had a separate backup system, allowing it to recover, which took weeks. Many departments had to operate offline for the duration.

7. How to Defend Against Ransomware Attacks

By now, you know ransomware is a mega threat and why precautions are necessary. So, the real question becomes how to prevent ransomware attacks from being successful.

Here are some things businesses can do to best defend against ransomware.

Be sure to acquire the right security solutions. As ransomware continues to evolve, the best cure is a strong defense, maintained and regularly tweaked for improvements. Josh Levine is a Corporate Account Executive at CrowdStrike, where he is on a mission to Stop Breaches. Levine specializes in the Healthcare space and helps organizations strategize and implement more mature security postures. Previously, he worked as an Account Executive at Oracle and with the U.S. Foreign Commercial Service in Lima, Peru. Levine graduated from the University of Georgia with a degree in Economics and International Affairs. He currently resides in Austin, Texas.

Six Things about Business Every Security Manager Needs to Know

5 Things Every Board Member Needs to Know about Security

What Every Organization Should Know About Cultivating Cybersecurity Talent