More Than Half of U.S. Adults Trust Law Enforcement to Use Facial Recognition Responsibly

A new Pew Research Center survey finds that a majority of Americans trust law enforcement agencies to use these technologies responsibly. A similar share of the public (59%) says it is acceptable for law enforcement to use facial recognition tools to assess security threats in public spaces.

At the same time, the survey finds that the relatively broad acceptance of facial recognition use by law enforcement does not necessarily apply to other entities that might use the technologies. Smaller shares of the public say they trust technology companies (36%) or advertisers (18%) to use facial recognition responsibly. And minorities of the public would find it acceptable for these tools to be used for purposes such as tracking who is entering or leaving apartment buildings (36%), monitoring the attendance of employees at a place of business (30%) or seeing how people respond to public advertising displays in real time (15%).

The attitudes also differ across demographic groups. For instance, a substantially smaller share of young adults think it is acceptable for law enforcement to use facial recognition to assess security threats in public spaces relative to older Americans.

Awareness of the systems is relatively widespread across a range of demographic groups, though there is modest variation in awareness based on factors such as educational attainment. The research shows that 95% of Americans with a college degree or higher have heard at least something about facial recognition technology, with 28% of college graduates saying they have heard a lot about it. But overall awareness falls to 79% (with 19% saying they have heard a lot) among those with a high school diploma or less. Awareness is also slightly higher among those with higher household incomes compared with those with lower incomes; among men relative to women; and among whites relative to blacks and Hispanics. 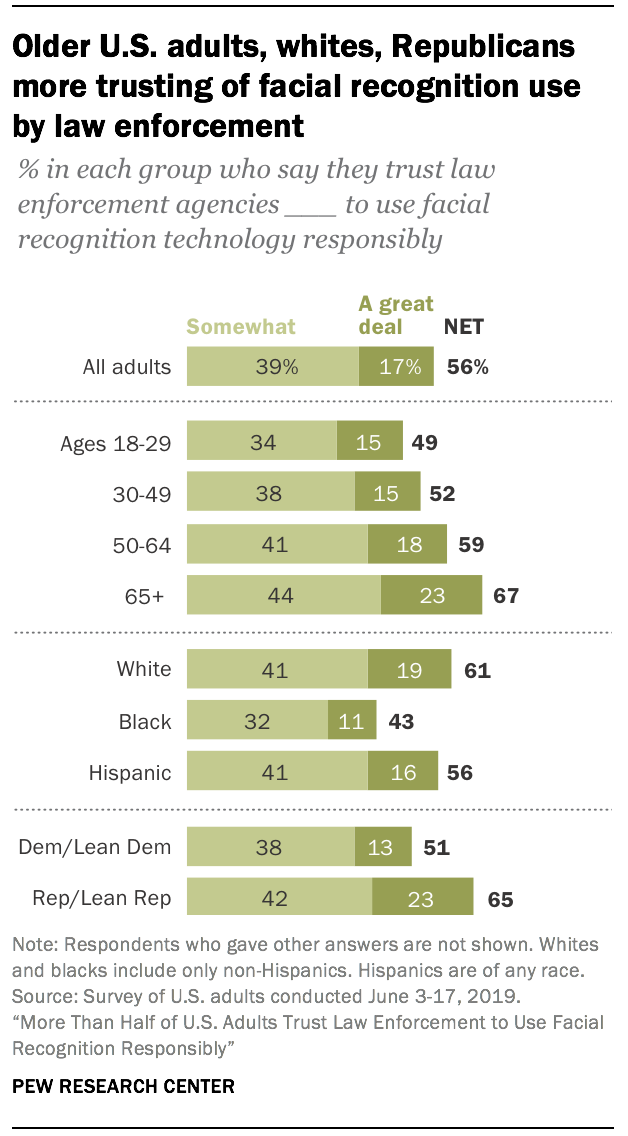 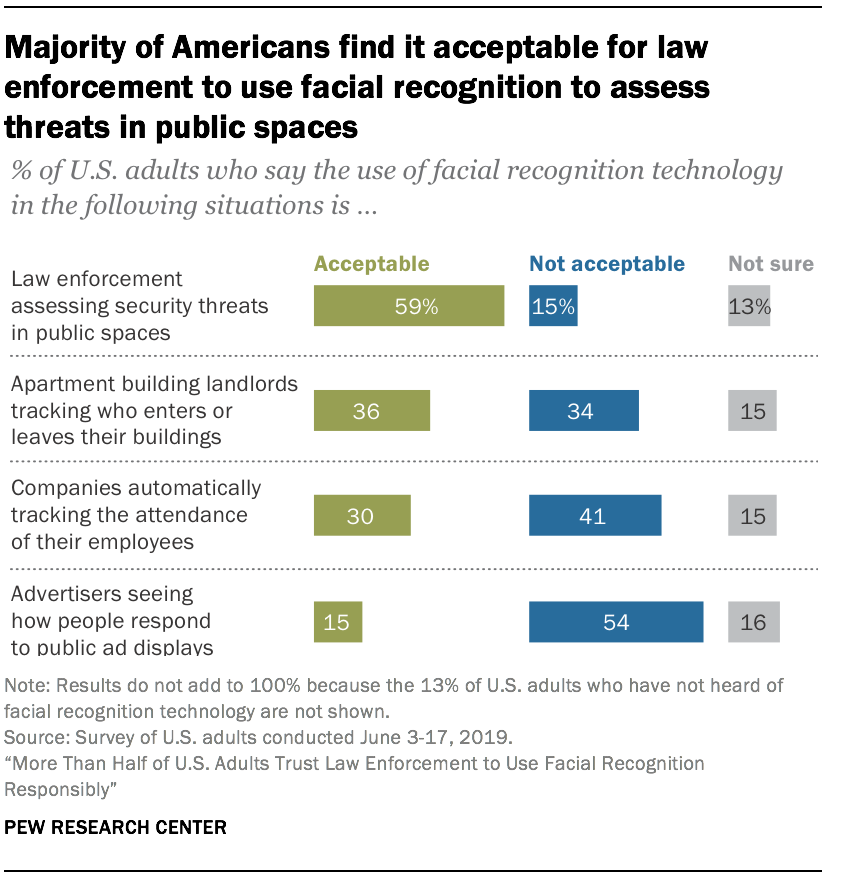 By comparison, larger shares of Americans find it unacceptable than find it acceptable for companies to use these technologies to automatically track the attendance of their employees (30% acceptable, 41% not acceptable), or for advertisers to use these tools to see how people respond to public advertising displays (15% acceptable, 54% unacceptable). According to the research, the public is largely split on apartment building landlords using this technology to track who is entering or leaving their buildings: 36% think this is an acceptable use of facial recognition technology, but 34% think it is not. 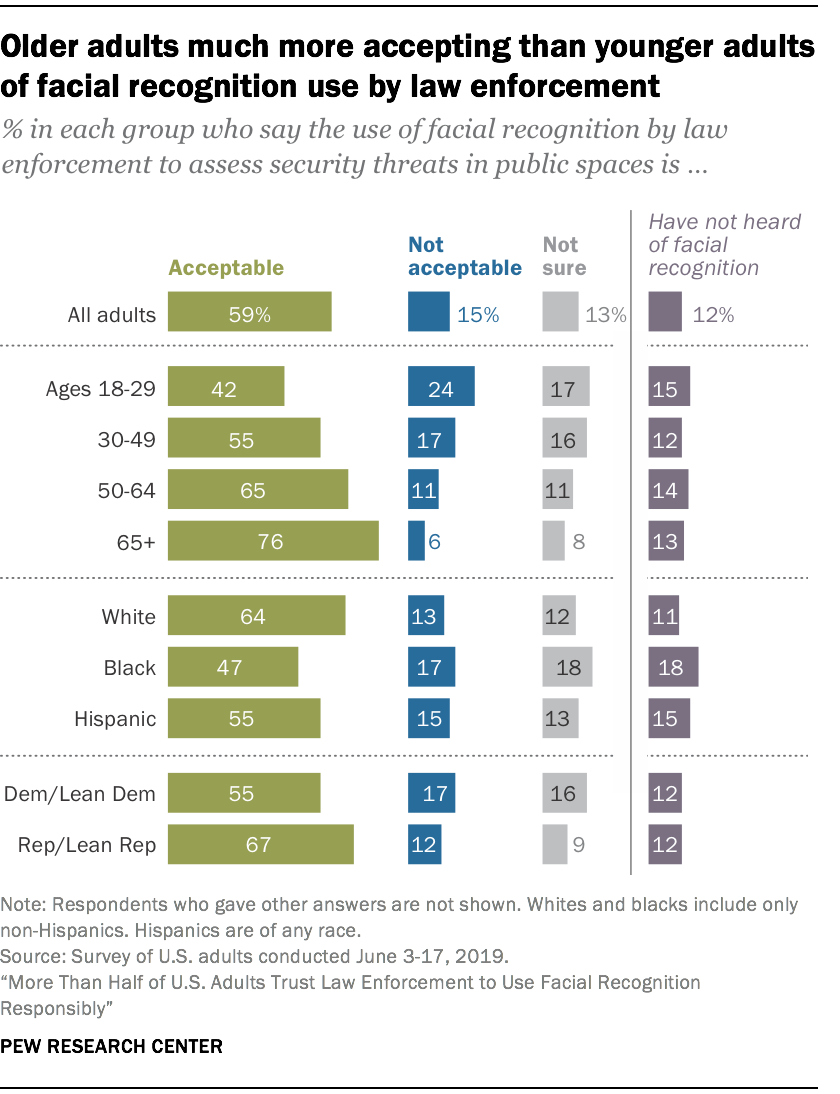 Despite some well-publicized examples in which facial recognition technologies have misidentified individual people or struggled to recognize certain types of faces, most Americans consider these tools to be relatively effective. Roughly three-quarters of U.S. adults (73%) think facial recognition technologies are at least somewhat effective at accurately identifying individual people. Smaller majorities think these tools are effective at accurately assessing someone’s gender (63%) or race (61%). 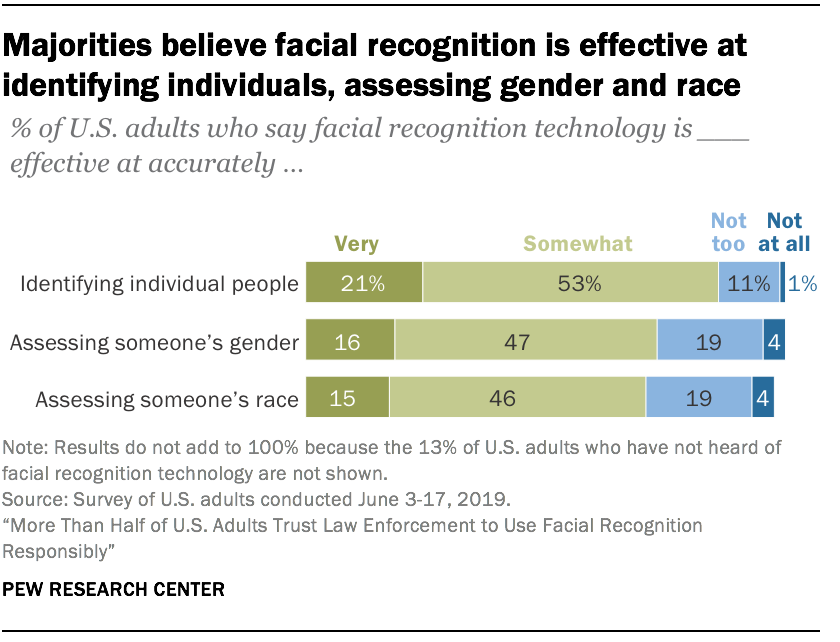