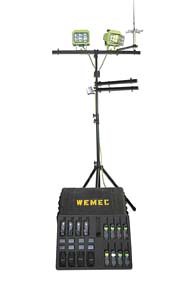 The EnGenius Wireless Enhanced Mobile Emergency Communications portable system links satellite, cellular and landline phone access to keep emergency and other personnel in constant contact.
Local law enforcement and private security will likely be among the first responders to any potential terrorist attack, so it is imperative that these essential folks are aware of any suspicious activity or behavior.

But exactly what characterizes “suspicious behavior” or “suspicious activity” as it relates to terrorism? Here are some suggestions, according to the FBI:

Certain kinds of activities can indicate terrorist plans that are in the works, especially when they occur at or near high profile sites or places where large numbers of people gather such as government buildings, military facilities, utilities, bus and train stations or major public events. Quick reporting is essential. That may mean reporting to the closest Joint Terrorist Task Force, located in a local FBI field office.

SUSPICIOUS QUESTIONING: Are you aware of anyone attempting to gain information in person, by phone, mail, email, etc., regarding a key facility or people who work there?

TESTS OF SECURITY: Are you aware of any attempts to penetrate or test physical security or procedures at a key facility/event?

ACQUIRING SUPPLIES: Are you aware of anyone attempting to improperly acquire explosives, weapons, ammunition, dangerous chemicals, uniforms, badges, flight manuals, access cards or identification for a key facility/event or to legally obtain items under suspicious circumstances that could be used in a terrorist attack?

SUSPICIOUS PERSONS: Are you aware of anyone who does not appear to belong in the workplace, neighborhood, business establishment or near a key facility/event?

DRY RUNS: Have you observed any behavior that appears to be preparation for a terrorist act, such as mapping out routes, playing out scenarios with other people, monitoring key facilities/events, timing traffic lights or traffic flow or other suspicious activities?

DEPLOYING ASSETS: Have you observed abandoned vehicles, stockpiling of suspicious materials or persons being deployed near a key facility/event?

If it’s yes to any of the above, or observed suspicious activity that may relate to terrorism, contact the Joint Terrorist Task Force or law enforcement/counter terrorism agency closest to you immediately. Any tips could save the lives of innocent people. For more information, log on to www.fbi.gov.

And be assured that law enforcement and counter terror agencies are getting better at not only responding to threats but also coordinating communications following viable terror tips.

For example, there now are digital video radio link systems that can be body-mounted or in unpiloted aircraft. One product called Manpack allows personnel on foot to simultaneously transmit high resolution video, audio and an RS232 data stream. One to one radio links and range extension through digital repeaters were integrated in the design from the outset. The complete encoding and RF electronics of the Manpack is housed in a package that is physically similar to a videocassette case.

Deployment will be particularly successful in city environments where there are high levels of radio related clutter that would normally make conventional video link reception “difficult” or operationally unusable.

Another new product is really a portable system that links satellite, cellular and landline phone access to keep emergency and other personnel in constant contact.

Regardless of how many federal, state and local law enforcement officers are on duty trying to prevent a possible terrorist attack, they rely on private security and the general public to be their extra eyes and ears. We must all have what is called by the police community “situational awareness.” It is fundamental, in other words, that people, including those in the private security field, be aware of their surroundings and try to take notice of anything or anyone that is suspicious, acting unusual or is out of place.

Only by law enforcement, private security and the general public working together can we truly enhance our homeland security and build a strong deterrence.

Bruce is the director of security for a large Central Florida resort, as well as a highly decorated Reserve Deputy Sheriff with a major law enforcement agency.
Subscribe For Free!
More Videos