Similar to other United States seaports, Jacksonville (Fla.) Seaport or Jaxport is increasing its port security in numerous ways. As part of the continuing upgrading, it is now using equipment from JVC Professional Products Co. of Wayne, N.J., for a unique large-scale, totally wireless IP-network monitoring and surveillance installation. The system uses the JVC VR-N100U, which provides the IP networking, video recording and camera management capabilities.

Based on guidelines from the Transportation Security Administration and the Department of Homeland Security, as well as its own desire for increased security, Jaxport wanted to add a high-tech video monitoring solution to complement its existing systems. The Jaxport solution, completed in August, combined wireless communications with multiple IP components and motion detection software to enables streaming of live video to patrol cars.

“The Jaxport surveillance solution is the most advanced IP monitoring and security system in the country,” said Steve Martin, assistant vice president of the JVC’s video imaging systems div. 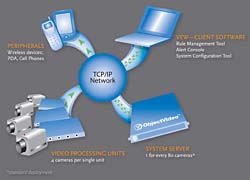 The Jaxport system uses multiple VR-N100Us, each of which is capable of integrating and managing thousands of video cameras under a single IP. The controllers store all individual camera data; only video from the requested camera is transmitted to the network level so as not to drain the port’s bandwidth.

Fort Lauderdale, Fla.-based Quality Communications, Fire and Safety Inc., was the systems integrator for the Jaxport project. “We brought JVC in as a value engineering entity to provide a much better solution as well as additional costs savings,” said Steve Haney, regional construction manager of Quality Communications.

After emitting an audible alarm alert, laptops in Jacksonville Police vehicles display a custom graphical user interface featuring ObjectVideo tracking software and JVC VR-N100 image detail.
Multiple security cameras are strategically placed throughout the seaport, each wirelessly connected to a VR-N100, which sends video to ObjectVideo (Reston, Va.) tracking software at 10 frames per second, 320x240 resolution. When the tracking software detects a rule violation and triggers an alarm, the video is sent back to the VR-N100, which sends an audible alert and the image to the patrol officer’s laptop in 680x480, VGA resolution at 30 fps, allowing a more immediate and accurate image to help them identify, track and catch the intruder. The system also displays live video, which can be controlled by the security officer, and includes an industry-standard pre-alarm, allowing the officer to play back video prior to the incident.

Multiple organizations worked together to design and implement the Jaxport solution. Han-Padron Associates, which holds a five-year on-call contract for Jaxport’s marine engineering services, brought in Russ & Baruzzini, a St. Louis-based company with security expertise in the transportation market, to assist in the system’s design. Quality Communications was awarded the job of implementing the security solution.