By John Mesenbrink
The city of Ottawa, Canada was facing a crisis. It needed to facilitate its growth plan by providing an expandable security system and provide for centralized monitoring and control of all its facilities. Johnson Controls/Cardkey Division, Simi Valley, Calif., installed its integrated security management system that serves over 55 facilities.

The new City of Ottawa was created on January 1, 2001. It encompasses the nation's capital and 11 former regional municipalities with over 700,000 residents and an area of 2,800 square-kilometers. A Cardkey security system, first installed in the former regional headquarters in 1990, has been expanded since then to serve municipal buildings throughout the new City. Suno-Tech, an authorized Cardkey dealer, was named service provider of choice for work on this large, integrated system.

The results were far-reaching: 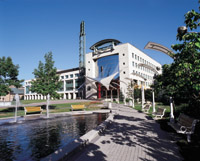 "I felt we needed to develop a complete integrated security management system, which would connect all of the facilities within the city," says Gauvreau. "My challenge was to sell this idea, and I needed strong dealer support to do that." Suno-Tech provided this support by taking an aggressive approach in researching the best way to meet the unique security needs of a new long-term care facility being planned.

Today, more than 55 buildings have been integrated using the Cardkey Pegasys 1000 Security System. More than 9,000 cards have been issued and more than 400 readers are in place. "With the constant addition of other facilities, we expect to have over 550 readers in place by the end of 2001," says John Gillen, regional manager for Suno-Tech. Currently, more than 1,000 points are monitored, which include access controls, fire alarm systems, life safety devices, standard alarm point monitoring, and security alarm interfaces, among others.

The Cardkey D620 and CK720 controllers facilitate communication among all facilities and continued growth of the system. "We needed a system with a lot of integrity, options and expansion capabilities," Gillen adds. "Because of the communications capabilities of the Cardkey controllers, the majority of buildings are connected by the customer's wide area network (WAN) with the remaining buildings connected by standard telephone lines." According to Gauvreau, the communications capabilities have been a key advantage of the Cardkey system. "We have avoided a lot of additional infrastructure and phone line rental costs," says Gauvreau. 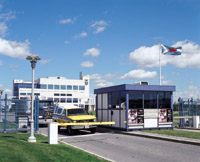 The Robert O. Pickard Center uses the Cardkey security system to monitor and control the activity of outside contractors, who haul waste to the facility.

With the large number of facilities involved, and the diversity of their functions, access control is just one of a number of applications that Suno-Tech and the region have found for Cardkey security systems. "The beauty of the system, and one of the reasons the city uses the Cardkey system, is that it is not just an access control system as much as it is a security management system, which can accommodate a multitude of devices," says Gillen. The Cardkey security system is also providing elevator control, intrusion detection, Badgemaster photo identification, monitoring of burglar alarm and duress alarm systems, and control of life safety devices at various buildings.

Unique applications include monitoring and access control of city government vehicles, which have been tagged and are scanned by underground readers located at the gates of various facilities. The Robert O. Pickard Environment Center uses this method to monitor and control the activity of outside contractors who haul waste to the facility. In addition to providing access and egress control, the system allows accounting personnel to verify the number of deliveries.

In order to meet the security needs of the new long-term care facility, Suno-Tech used the Cardkey security system to provide a safe, yet friendly, environment for the residents of the facility. "The challenge is to provide an open and friendly environment, yet maintain the safety of residents identified as at-risk," says Gillen. By using the proximity reader technology and identification wristbands, Suno-Tech programmed the readers to lock the doors when an at-risk resident approaches. This allows other patients, staff and family members to move about freely. If an at-risk resident somehow manages to bypass the system, a back-up alarm system is activated and the nurse's station and the central office downtown notified.

A recent system addition to the system was the city's two water purification plants (Britannia and Lemieux Island) that are now protected by access control. "With the security risks associated with these types of facilities in our modern age, I think it is most important to protect our drinking water," says Gauvreau.

The entire system is designed to work well with a minimum of human intervention. "This saves on contract security costs and man hours for a variety of security and non-security related functions. This allows the city's people to focus on their jobs and core mission. The end result is a safer, more efficient workplace," says Gillen. "The product is user-friendly. It works for all of our applications and gives us peace-of-mind by permitting us to have control when we want it," adds Gauvreau.