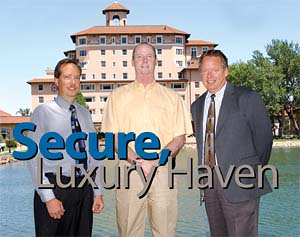 Nestled in the foothills of the Rocky Mountains, in Colorado Springs, lies a large parcel of land that was first utilized as a ranch in the late 1800s. A small dairy replaced the ranch, but it faired poorly because of the owner’s inexperience with animals, and the land was once again sold.

James Pourtales, a Prussian count who had settle in Colorado in the late 19th century, bought 2,400 acres of the land and built The Broadmoor Casino and a small hotel. Unfortunately, his efforts failed due to financial problems, and the casino and hotel were used for other purposes until Philadelphia entrepreneur Spencer Penrose purchased the property and turned it into “one of the finest resorts of its time,” drawing in dignitaries from around the world with the allure of the pure mountain air and first class amenities.

Today, The Broadmoor still stands in its glory and reputation as a Mobile five-star, AAA five-diamond resort. In fact, it has held both ratings longer than any other U.S. hotel property.

The facilities have been expanded over the decades and across 3,000 acres to include over 30 buildings, 700 total guest¬rooms, three golf courses, restaurants, retail shops, a spa and a golf and tennis club. All were built in different eras and under different construction codes.

Shown is The Broadmoor’s Security Command Center with video display units, which monitors cameras throughout the campus and remotely controls entry access to doors and gates and provides intercom access to the gates. SimplexGrinnell’s Eric Engle and Dave Sargent look on.

Such was the challenge of the property’s owners and facility manager when they decided to upgrade the life safety and security systems in 2001. The original zoned fire alarm system provided the security office with building information when an alarm-initiating device – such as a heat detector – was activated, but did not offer any specific location within the building.

“The system was appropriate for the time that it was installed,” said Sargent, “but codes and The Broadmoor’s high standard of customer service required the installation of a more advanced system with an early detection system.”

The first phase, completed in 2001, included a major reconstruction of the original six-story hotel, The Broadmoor Main. Guestrooms were gutted (they even had Bobcat equipment in the interior), and a new early detection fire alarm system, along with access control, video surveillance and intrusion detection systems, were all integrated into the renovation.

The public areas of this venerable building, however, required a lot more finesse, both from a layout perspective as well as the installation, said McHale. The owners didn’t want unsightly devices, sprinkler heads or conduits destroying the built-in artwork and architecture.

“Fine art, plaster casting and friezes on the ceiling all needed to be protected during construction,” said McHale. “The installers figured out a way to make it all work without disturbing the artwork. It came out just perfect.”

Of course, installing a new life safety and access/video systems in the middle of a massive renovation has its challenges.

“If other trades fell behind schedule,” said McHale, “if carpenters didn’t have the metal stud installed, for instance, the crew couldn’t install their cable. Very often, with the main building renovation, the SimplexGrinnell crew was there on weekends or was working till 11:30 at night to keep on schedule.”

Another part of the Phase 1 project was to install security at the gates. Because the resort had grown to such large proportions, the management wanted to give incoming guests and patrons a sense of arrival. To do that, they had to funnel all traffic through a main entrance.

The resort had installed a perimeter fence with several manned gates for security. But after a near-tragic accident in which some kids – who were trying to gain entry into the hotel – ran down and injured a security guard, the resort management quickly made the decision to increase security by adding cameras.

“We now have camera systems at every access point,” said Wayne Hoskins, director of security for the resort. “Two entries are manned 24/7. For employee access, we installed a barcode reader. Vendors use our Aiphone intercom system to request entry.”

Vehicles entering the property range in size from buses to sports cars and golf carts, so to meet the resort’s requirement for hands-free vehicle access control with a minimum read range of 15 feet, five Balogh LMB6033 long-range proximity readers were installed.

But the manufacturer of the long-range readers used for the first phase went out of business. This presented a dilemma.

“The Broadmoor had already installed over 1,000 credentials in both resort and customer vehicles,” said Eric Engle, integrated security specialist at SimplexGrinnell, “so we had to find a second long-range reader that could function in a side-by-side configuration with the existing unit via a custom interface that we designed.”

Another obstacle in installing gate access involved the extreme weather environment of the area. Temperatures fall below zero in the winter and reach the mid-90s in the summer, a season that also can bring severe thunderstorms and hail.

“Most of the gates are located remote from any building,” said Engle. “Electronics had to be located adjacent to the gates, so SimplexGrinnell designed and provided custom electronic cabinets to house the equipment.”

The cabinets contained heaters, fans and thermostats with high and low temperature settings to automatically activate heaters in cold weather and fans in warm weather.

The mitigation of lightning strikes was also a critical system layout requirement, said Engle. The solution was to use fiber optics to transmit signals between buildings and to the security control equipment in the custom electronic cabinets.

Since employees had existing barcode IDs and golf club members had existing magstripe IDs, the resort wanted to use these existing technologies at the new pedestrian gates.

After completing the phase one work, the company moved on to other aspects of the project. They had now completed all six phases, including installation of nine Simplex 4100 fire alarm control panels, along with several Simplex 4020 and 4010 model control panels in a variety of buildings. Each panel would report directly through the network to the security office, and indicate on an LCD display at the Security Command Center the specific type of fire alarm device and the specific environmental conditions that the device had detected.

The smoke sensor doesn’t make the decision to set off the alarm, explained Dave Fear, the company’s total service manager for the project. “It only relays the data to the central processor, which analyzes the information and determines if it’s a fire based on the last 1,000 samples from that smoke sensor. This advancement in technology helps avoid nuisance alarms, a must at a luxury resort.”

The technology is backed up further by a Positive Alarm Sequence feature. When a detector goes into alarm, security receives the alarm and sends out its trained response team. If the team doesn’t reset the panel within 120 seconds, the panel automatically goes into its preprogrammed evacuation mode, which is set according to the area, floor or risk factors in each building.

On the security side, Hoskins was delighted with his new, custom Security Command Center, devised by Gary Lane, SimplexGrinnell’s security project planner. The installation was a real challenge for the company’s crew to tackle, said Hoskins. Equipment had been piled in the existing command center for more than ten years.

The DVRs are Pelco DX8000s. Two DVRs are located in the command center. The remaining DVRs are located throughout the property and are connected to Broadmoor’s network to allow viewing of live and stored video from any DVR at the security command center. Prior to the company’s involvement, the resort had 16 cameras installed from various manufacturers. SimplexGrinnell replaced eight of them, and have since added more than 110 fixed, color cameras and five Pelco Spectra Dome PTZ cameras.

The renovations and new construction at the resort continue with the current construction of the Broadmoor Hall, which will house a 60,000 square foot, column-free ballroom/event center, 20,000 square foot of office space, a destination restaurant called “Summit” (designed by world-renowned designer Adam Tihany) and a 6,000 square-foot carriage house museum. The facility will be complete with video surveillance, intrusion systems and a state of the art fire alarm system.

Additionally, the resort has just acquired the Hotel Jerome in Aspen, located about five hours away from The Broadmoor. Built in 1892, the Hotel Jerome will be renovated under a $20 million project starting in 2006.

“Our DVR surveillance system will actually be linked through the Ethernet to the Jerome so that we can observe and record events there,” said McHale.

Since the purpose of the life-safety system is to protect against fires and other hazards, the return on investment for McHale is the ability to keep the property at a world-class level.

“The upgrades have allowed us to continue to be the pacesetter for the new luxury hotels that pop up around the country,” said McHale. “But there’s also an intrinsic value to having a state of the art life safety system. It allows me, as the facility manager, to sleep well at night.”

More information on HID of Irvine, Calif., an ASSA ABLOY Group Co., at www.hidcorp.com; from Pelco of Clovis, Calif., at www.pelco.com; from SimplexGrinnell of Westminster, Mass., at www.simplexgrinnell.com; and from TimeKeeping Systems of Solon, Ohio, at www.guard1plus.com.

For more information on security integration and convergence, go to the Security magazine Web site at www.securitymagazine.com and use the LINX service, powered by Google. Use keywords and pull down the Security choice at the right-hand side of LINX.