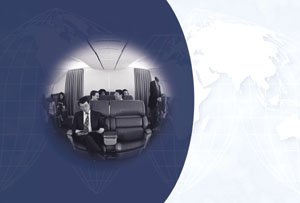 The current crisis necessitates a delicate balance between airports, airlines aircraft manufacturers, government agencies, private enterprises, innovative policies and new technologies. Shoring up the strength of the American transportation system, especially air travel, is now an essential but also expensive and complicated business. Through cooperative efforts, however, reactionary responses to emergency events are developing with promises to implement proactive solutions to impending problems. “There will be higher levels of surveillance, more stringent searches. There will be more security officers [and] random identification checks,” Mineta said. “We must do whatever it takes, with safety as our highest priority.” One company at the crux of the ongoing crisis is the world’s largest commercial jet manufacturer, The Boeing Company. Two weeks after the terrorist attacks on the World Trade Center and the Pentagon, Boeing chairman and CEO Phil Condit issued a promising statement from the company’s Chicago headquarters. “Right now is an incredibly safe time to fly,” Condit said. He pointed out that airports are the primary points of security while the nation’s aircraft serve as a last line of defense, and comprehensive response is required. Just over a month after the terrorist attacks, Boeing announced the creation its Seattle-based Security & Safety Services organization under its Commercial Airplanes business. This unit was tasked to improve security and thwart hijacking and terrorist attacks on airplanes. Industry safety veteran, Charlie Higgins, was selected as vice president of security and safety services Boeing Commercial Airplanes to lead the team in its mission to enhance the safety, security and efficiency of airplanes and the larger air transport system. “True security can be accomplished only by addressing all aspects of air travel,” Higgins says. After heeding recommendations from the Department of Transportation (DOT) Rapid Response Team on Aircraft Security, headed by Secretary Mineta, “The next layers out from that are the entire aircraft and the transport system itself,” Higgins says. Since airlines implemented the immediate 90-day security recommendations, Boeing’s security proposal will help with more permanent, long-term enhancements. Their solution addresses ways to meet new requirements for strengthened flight-deck doors and video surveillance of the flight deck entrance. “We continued to meet with the airlines, pilots and flight attendants and developed a set of requirements for the longer term solutions: namely, the flight deck and cabin,” Higgins says.

In response to September 11, cockpit doors have become the last line of defense against in-air terrorism. Boeing contracted with C & D Aerospace to create a stronger, more versatile solution.

In a statement issued shortly after the notorious attacks, Sen. Ernest F. Hollings (D., S.C.), Chairman of the Committee on Commerce, Science and Transportation, said, “Ensuring that a cockpit is the most secure place on the plane is a critical step to preventing the scenarios that seem to have occurred last [September].”

Similarly, John W. Douglass, president of the Aerospace Industries Association of America, speaking on behalf of aircraft manufacturers, told the U.S. House of Representatives that ongoing efforts need to concentrate on “the security chain of command,” which includes effective intelligence, airport security and security on the plane. When these aspects of prevention fail to deter threats, then cockpit security becomes crucial. “We need to examine all of these ideas to improve cockpit security,” Douglass says. Boeing concurs: “The fundamental strategy is to make the flight deck secure. If the flight deck is secure, then a lot of other questions go away,” Higgins says.

Boeing has responded by offering its customers enhanced flight deck doors. Reinforcement bars and other short-term precautions will give way to permanent solutions based on new long-term requirements for cockpit door security.

“Before September 11, the door was there to provide a quiet office environment for the flight crew to carry out their duties,” Higgins says. It also had to meet industry decompression requirements. If a hole developed in the flight deck or the passenger cabin, then the door would act as a release valve. Finally, the door had to be penetrable by emergency personnel assisting an incapacitated crew in the event of an emergency. After September 11, the question became, how strong do the doors need to be to prevent unauthorized access? “We in the industry came together and volunteered to the Federal Aviation Administration (FAA) a set of requirements. Fundamentally the requirements deal with a hypothetical situation, whereas a really big guy charging down the aisle will not be able to play linesman to get through that door,” Higgins says.

In some parts of the world, the ground security is relatively lax, so terrorists could seize potential opportunities to get explosive devices onboard airplanes. Therefore, Higgins says, “there is a requirement to withstand a small explosive device that could be put near the cockpit door.”

Reinforced flight deck doors, stowable CCTV monitors, and in some cases Taser guns: New security devices are being used to protect flight crews and controls on the nation's aircraft.

According to Secretary Mineta’s Rapid Response Team, “There is consensus that cameras to monitor and view the area outside the flight deck door may add value. There should be continuous lighting outside the flight deck door for visibility, as well as to provide lighting for cameras. While there may be value in video or audio systems, which provide information about activities throughout the cabin, we have no consensus on whether or how to proceed with this technology.” Mineta’s team also expressed concerns about how the system would function in airplanes’ uniquely isolated environment as well as potential problems with in-cockpit display placement. Boeing’s response “offers a camera right outside the flight deck door with the display in the flight deck,” Higgins says. Boeing’s CCTV system design and development was lead by Everett, Wash.-based Jamco Corp., and Thales, the French electronics company serving aerospace, defense and information technology markets. According to Jim Proulx of Boeing’s Commercial Airplanes business, the system is comprised of two cameras. “One is for positive identification of someone wanting to enter the cockpit—to view his face, verify who he is and see if he is qualified to enter the cockpit. The second camera will be mounted such that the area immediately surrounding the flight deck door—about an eight-foot radius—will be visible to the flight crew.” Proulx says that this configuration will prevent passengers from hiding behind corners in the proximity outside the cockpit. “There will be low-light technology, likely infrared-based for passenger comfort.” Overall, the CCTV system will comprise two cameras initially—a video control unit for a power source and a stowable display for the pilots to use in the flight deck. “The monitor will have to be stowed during the takeoff and landing portions of flight,” Proulx says.

Boeing is committed to making the designs and kits for the CCTV, flight transponders, flight deck doors and other additional security enhancements available to the 5,500 Boeing aircraft in the U.S. fleet so that the security upgrades can be incorporated by April 2003. “Everybody in the entire transportation system has good ideas about how the airport, airplane and ramp area should be better secured. We’re just offering our help to our airline customers, the government and airports to assist in those arenas. If they ask for it, we will be there ready and willing to help,” Higgins says.

Through cooperation between the government, private industry and everyday Americans, as well as the integration and innovation of security technologies, workable solutions to the current air transportation crises are possible. Also, more inventive and proactive thought on the part of these cooperative parties could prevent unprecedented methods of terrorist attacks in the near and distant future.

Following the terrorist tragedies, Audio Visual Telecommunications (AVT), Victoria, B.C., completed a new airline security device. The technology that AVT developed transmits live streaming video with compression algorithms that allow a video stream to be encoded, transmitted through the existing cellular network and then decoded at a selected site. Unlike current wireless video devices, distance is not a factor when transmitting.

“The problem with transmitting from an airplane is that there are no cell towers in the air,” says Garry Robb AVT president and CEO. “With satellites everywhere, we no longer have dead areas. The images that we transmit are clear enough to identify individuals faces if they commandeer an airplane.”

Loronix Information Systems, Denver, expanded its installation in the Calgary airport in Alberta, Canada. On the heels of the September 11 attacks and in preparation to host the G7 Summit in 2002, Calgary is enhancing security to better service its 8.7 million travelers. The original system was to include approximately 400 cameras in a 4-phase implementation process. That number has now increased to approximately 600 cameras. The Loronix system has already been implemented throughout the airport’s four concourses, including immigration checkpoints and baggage areas.

The FAA is granting consideration to the use of the Fastlane Door Detective by Smarter Security Systems Inc., Atlanta, for use in airports nationwide.This technology involves alternative modes of operation-tailgater detection designed to overcome the problems of unauthorized entry or for accurate automatic building population counting. This product creates an infrared field across a doorway to monitor the passage of every individual passing through, alerting security staff to the presence of unauthorized entrants.