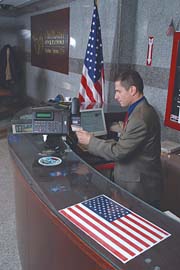 A document-verification system plays an important role controlling access into the corporate headquarters of the American Stock Exchange.

The fakes are getting better and that’s not good. “Improvements in the quality and sophistication of phony driver’s licenses and government-issued ID cards, which can be used to gain access to our headquarters, makes them difficult to spot with the human eye,” says Ron Shindel, senior vice president of the American Stock Exchange’s Security Administration.

Shindel shares his concern and challenge with numerous operations ranging from nightclubs to national borders, all using identification cards to determine if they allow entrance or serve a drink.

Whether to fight terrorism, minimize unauthorized access or cut down on under-age drinking, organizations around the world now employ diverse technologies to catch fake IDs and authenticate documents.

The American Stock Exchange, for one, has brought in technology to verify the validity or visitor ID cards. At its headquarters in New York City, the Exchange uses ID-Check units from Intelli-Check of Woodbury, N.Y. The device reads, decodes and processes information on driver’s licenses and government ID cards that have a magnetic stripe or barcode. The system determines if the ID is valid, has been altered or tampered with, has expired and even has a date of birth equal to or greater than the legal age to purchase age-restricted products.

With the addition of C-Link software to the unit, an operator can connect the ID-Check unit to a computer and view live transactions on the computer screen and archive information into a database for a visitor audit trail or for use with other vendors’ visitor badging systems.

Accurately and quickly validating identification cards is a growingly important security task. Government and business facilities are more sensitive to identifying and recording information on visitors, temporary workers and delivery people. Dram shop law liability concerns make businesses that sell age-restricted products such as liquor and cigarettes seek out better ways to validate an ID, too.

There has always been fake IDs, of course. However, with the advances and spread of computer technology, the impact of marketing fake IDs on the Internet and in the aftermath of September 11th, the challenge to spot fakes has increased dramatically.

Right after the tragic terrorism attacks in New York City and Washington, D.C., there was renewed interest in creating a national ID card. While that effort has derailed, in part because of privacy concerns, state governments, the military and the federal government all continue to improve identification and security elements on diverse driver’s licenses and ID cards they issue.

Still, validation of ID cards has become such an important task for many organizations that “eyeballing” is no longer good enough.

The solution: electronic systems that can “read” ID cards and match what they read against templates of the cards’ elements from the diversity of issuers. It’s not an east task.

“There’s no great secret in how to read a barcode or a magnetic stripe,” observes Frank Mandelbaum, chairman and CEO at Intelli-Check. “If you read the data only, you can read a fake as real.” Instead, the company has developed software and hardware that reviews certain relationships and security elements buried in the diversity of driver’s licenses and government ID cards to validate authenticity.

The company works with various organizations, including the American Association of Motor Vehicle Administrators, to gather the ID card security relationships and keep systems updated as states change and update their licenses. Keeping up with ID card changes is a daunting task. There are scores of changes each year as states, the federal government and the military continue to strengthen their cards and licenses. For example, several states now digitize the license holder’s picture into the card. Intelli-Check offers a plan for upgrades by downloading or “cards that you can drop into the (equipment’s) tray,” adds Mandelbaum.

For operations more focused on age-verification, the Woodbury-based firm markets a unit, IDentiScan, which concentrates on the date of birth field in driver’s licenses and government IDs. Darden Restaurants’ Red Lobster and Olive Garden shops in Philadelphia, Pa., use Intelli-Check equipment to comply with a city ordinance that seeks to prevent the inadvertent sale of alcoholic beverages to under-age purchasers. The Q-Lounge in New York City uses the technology to age-verify, too.

Still, as office high rises, manufacturing plants and government buildings harden facility access in the face of terror threats, validating IDs of visitors and delivery people is a top goal.

Among Bulla’s suggestions, he urges organizations and facilities to reduce the number of facility entrances, both vehicular and pedestrian, to the absolute minimum that can be positively controlled by security personnel, and physical and electronic security systems.

He also urges security screening of vehicles and visitors as remotely as possible. “At a minimum, visually inspect storage and passenger compartments, and limit adjacent parking to those persons having a corporate ID. Screen visitors by requiring a valid, government-issued ID, having them register as they arrive and depart, wear a visitor pass and be escorted by their employee host. Hand-carried items and bulky clothing should be removed and inspected,” he says.

Concerning the handling of deliveries and delivery people, Bulla adds that security executives should, when possible, schedule deliveries in advance, providing the vendor and their drivers with a unique code word or password, which should be printed on their manifests for comparison by the customers’ security or receiving personnel. Refuse all non-scheduled deliveries, he adds.

Shindel of the American Stock Exchange is always seeking ways to improve entry controls. “Intelli-Check’s ID-Check technology is an exceptional weapon to use to combat against the rapid proliferation of counterfeit driver’s licenses.”

Visitor controls, however, can quickly get even more complex at busy national border crossings.

Earlier this year, for example, investigators working for the General Accounting Office testified before the U.S. Senate’s Finance Committee about how easy it was to use fake identification cards to enter the U.S. through San Ysidro, Calif.; Blaine, Wash.; and Miami International Airport. In 2002 alone, about 71,000 foreigners were arrested after attempting to enter the U.S. illegally, most often using false documents.

There are numerous technologies and procedures under development to better identify people at the nation’s borders.

One interesting approach is being tested at the Peace Bridge border crossing near Buffalo, N.Y. The program is called NEXUS and tries to balance convenience with higher security — no mean feat. Americans and Canadian citizens who frequently cross undergo an extensive background check and then receive a special photo ID card with imbedded micro-antennas. The radio frequency approach works together with specially designated NEXUS vehicle lanes.

Beyond access controls for businesses and governments, the proliferation of fake IDs is also being driven by the increase in identity theft. A report provided by the Copley News Service, for example, suggests that law enforcement officers probably confiscate up to 10 million fake driver’s licenses, birth certificates and other forms of identification last year. And it’s wrong to assume that all fake IDs are used by under-age individuals wishing to purchase liquor or cigarettes. For example, media reports detail that about one in five phony IDs are grabbed from people 35-45 years old.

ID Mills on the Web

The reach and diversity of the Internet has accelerated fake ID problems, of course.

Numerous people have used the Web to talk about how to make a fake ID, and numerous sites “sell” fake identification cards. A Congressional investigation recently turned a light on this activity and some Web sites have disappeared. But others still remain. In addition, some of the Web sites warn that, ironically, some of their competitors may take a customer’s money but not deliver the fake ID.

Earlier this year, the Federal Trade Commission took action against six people who were allegedly selling fake international driver’s licenses through the Web.

Illegal immigration also is an area where fake identification cards are an underground business. Law enforcement officials, for instance, have seen an increase in the sale of fake IDs at flea markets.

Of course, colleges and universities still are a hotbed of fake identification cards. Over the last half year, police have taken action at Iowa State University, Purdue University and the University of California San Diego, to name a few, to break up fake ID card “mills.” Often these mills can sell hundreds of cards, often at the beginning of a semester.

Nightclubs, restaurants, casinos, hotels and grocery and convenience stores all have one big challenge in common. They need to prevent the sale of alcoholic beverages and cigarettes as well as the entry into gaming and adults-only areas to under-age individuals.

With better fake IDs and greater liability exposure, these establishments are seeking ways to go beyond “eye-balling” an ID.

Focused on the sale of alcohol to young people, Mothers Against Drunk Driving (MADD), has recently taken another step forward. It has joined forces with Intelli-Check, the Woodbury, N.Y. document verification systems firm, to encourage establishments to quickly and easily identify fake IDs and prevent those under-age from purchasing alcohol. As part of the program, Intelli-Check will help raise money for MADD to continue its efforts to prevent under-age drinking by making a donation to MADD for each system sold in the program.

“Under-age drinking is the nation’s No. 1 youth drug problem—killing 6.5 times more young people than all other illicit drugs combined,” MADD President Wendy J. Hamilton says. “The combination of ID-Check and IDentiScan products with proper training can help save our young people from the dangers of alcohol use.”