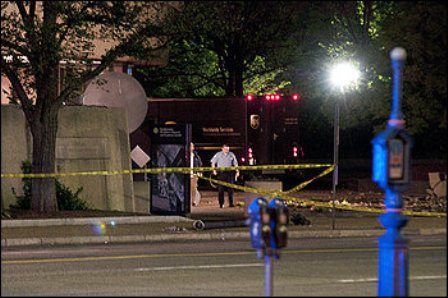 The UPS truck that smashed into a lobby window of the Smithsonian Institution’s Hirshhorn Museum in Washington D.C. plowed through five of the building’s 1,200-pound cement security planters, but the planters slowed the runaway vehicle and prevented more damage. The May 10 incident, in which the delivery truck inexplicably careened off Independence Avenue SW, flattened a decorative street light, and smacked into the museum, remains under investigation. The unidentified driver was treated and released from a hospital the same night. Although apparently an accident, the crash seems likely to prompt concern over the hierarchy of security around the city’s monument and government core and the evolution of security levels at Washington’s icons. Although the truck seemed to push the security planters aside easily, the planters did what they were designed to do: slowed the truck and prevented the damage from being worse. Additional permanent security measures are planned for a future fiscal year. The truck has been recovered and would be part of a company examination of the incident. The cause of the accident is unknown.