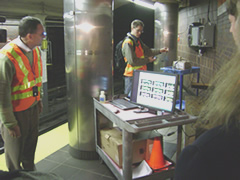 Since ancient times, airborne chemical and biological weapons have been used to threaten populations. During sieges throughout history, human and animal corpses were used in attempt to spread plague and cholera. In the First World War, chlorine and mustard gas killed hundreds of thousands.

More recently, the chem-bio threat has gone—literally—underground. In 1993, during the truck bombing, a canister of hydrogen cyanide was placed in the truck in the hope that the poison gas would be blasted up the ventilation system. Two years later, Japanese cult members opened canisters of sarin in the subway, killing 12 and leaving thousands in need of medical attention.

The Secretary of the U.S. Department of Homeland Security is charged with leading Federal efforts to prepare for, respond to, and recover from a domestic attack. Secretary Napolitano has emphasized preparedness and shared responsibility when it comes to protecting the nation's critical infrastructure.

One vitally important aspect of preparation is for public safety officials to understand how gases might behave in different scenarios—such as when released in the underground subway system of a large American city. The incapacitation or destruction of a major transportation system could debilitate the overall stability of the and threaten national security.

Yes, you read that right.

But not to worry. "Both gases are innocuous, non-toxic, and inert," says Teresa Lustig, a program manager in S&T's Chemical & Biological Division, who is leading the study. "They've been used since the 1960s in dispersion experiments, and pose no health risk."

Throughout the seven day S&T study, particle and gas concentrations are being sampled in more than 20 stations and in subway cars in the underground portion of the MBTA system. Commuters may notice the presence of equipment and researchers, but the study is designed not to disrupt normal activities or inconvenience the public.

Some of these non-toxic gases have been used in similar studies and others even have common, everyday uses. Sulfur hexafluoride is a harmless, common tracer gas used for indoor and outdoor air testing. Perfluorocarbons are used during eye surgery to temporarily replace the vitreous humor when a retina is being reattached. Sodium fluorescein is an organic dye used in medical imaging applications and in oceanography as a marker in seawater.

A similar subway system airflow study was conducted in 2008 in the Washington, DC area, and serves as an excellent contrast to the Boston study. Whereas the MBTA subway system is very old and poorly ventilated, 's is relatively modern and well-ventilated.

Data obtained from these initial groundbreaking studies have been critical to the development of specifications for the next generation of biological agent detectors, and for designing response strategies for both biological and chemical detection systems.

Here's how the study worked:

The particle tracers, embedded in an aerosol spray, were released at the same time as the gases so that researchers could compare which form of agent—aerosol or gas—travels further, faster, or more unpredictably. The gaseous and aerosol tracers are complementary—dispersing and sinking at different rates and in different patterns—allowing removal mechanisms such as deposition and filtration to be measured in addition to the transport and dispersion processes. The gaseous tracers, like the chemical agents they simulate, provide baseline data for the transport and dispersion processes because they pass through filters and are transported much further. The two gases weigh about the same as air, which means they remain airborne indefinitely and can be measured in the air for a much longer period of time. The aerosol particles deposit on surfaces and the ground after a short period.

In another example, Chemical company BASF is completing the installation of a wireless asset-tracking system to monitor the location and condition of its fleet of railcars containing the company’s six most hazardous chemicals. The tracking units provide BASF with visibility of approximately 1,000 of its 7,000 railcars as they travel from chemical plants to customers throughout . A VeriWise asset-tracking unit contains a GPS receiver, a communications satellite transceiver and a battery, as well as optional sensors, such as those used for detecting impact and motion, or for measuring temperature. The entire unit measures 2.5 inches by 11 inches by 30 inches, and is bolted to the top of a railcar. Once installed, the device transmits its ID number, its location and any other data at predetermined intervals over a low-orbiting communication satellite, to a VeriWise server hosted by GE. BASF can then access the information via the Internet. According to BASF’s logistics technology manager, VeriWise software running on the server can also send alerts to BASF and authorized users in the event of a specific incident—such as a railcar collision, an unacceptable temperature fluctuation or tampering with a car’s dome.

Are We Doing Enough to Combat Chemical, Biological Weapons? Email your thoughts to zaludreport@bnpmedia.com