How security can support homeless populations

By leading with empathy and respect and working with community partners, security leaders can help people experiencing homelessness connect to necessary resources.

In January 2020, the estimated number of people experiencing homelessness in the United States totaled 580,466 individuals, according to the National Alliance to End Homelessness.

As the Security Director at Seattle Children’s Hospital, Jim Sawyer leads the security team’s homeless population support efforts. According to him, it’s important for security officers interacting with homeless individuals to understand homelessness within the larger social and historical context.

“People need to wake up and take a look at the income inequality in the United States right now. It’s worse than it was in October 1929,” Sawyer says. “We have to face that reality.” By learning about the economic and social factors that contribute to homelessness, security officers can be better prepared to engage with people experiencing homelessness who use their facilities, he adds.

Robert Simmons, the Director of Social Services and Public Safety at the Oak Park Public Library (OPPL), emphasizes the importance of building trust with the wider community. The security team at OPPL, which serves many neighborhoods in the Chicagoland area, focuses on outreach and personal engagement when supporting homeless patrons. “It’s important for our public safety staff to be able to engage — not only to de-escalate situations with any patron, but particularly if there’s a vulnerable patron having mental health issues or experiencing homelessness,” Simmons says. “We even started intentionally hiring people with outreach skills to implement some of that strategy into our public safety team.”

Leading with respect and understanding is an important step toward de-escalating an interaction, according to Sawyer. “When you train new officers, this has to be part of orientation from the outset, and, of course, is the key part of the de-escalation strategy.”

Aaron Alonzo, OPPL Manager of Public Safety, says that learning the names of individuals experiencing homelessness can go a long way in developing that respect. “Especially with my staff, I showed them that it’s important that not only are we visible, but we’re also developing a rapport with the public,” he says. “It’s important to show empathy. When we have a conversation that may be difficult, take time to explain the situation to them — it’s okay to let them voice their frustration. Just reassert what needs to be done.”

“That relationship with patrons has served us in a tremendously positive way,” Simmons says. “It really goes back to re-envisioning our engagement with vulnerable patrons and making sure that people get what they need because the answer is not just always excluding someone or kicking them out.” 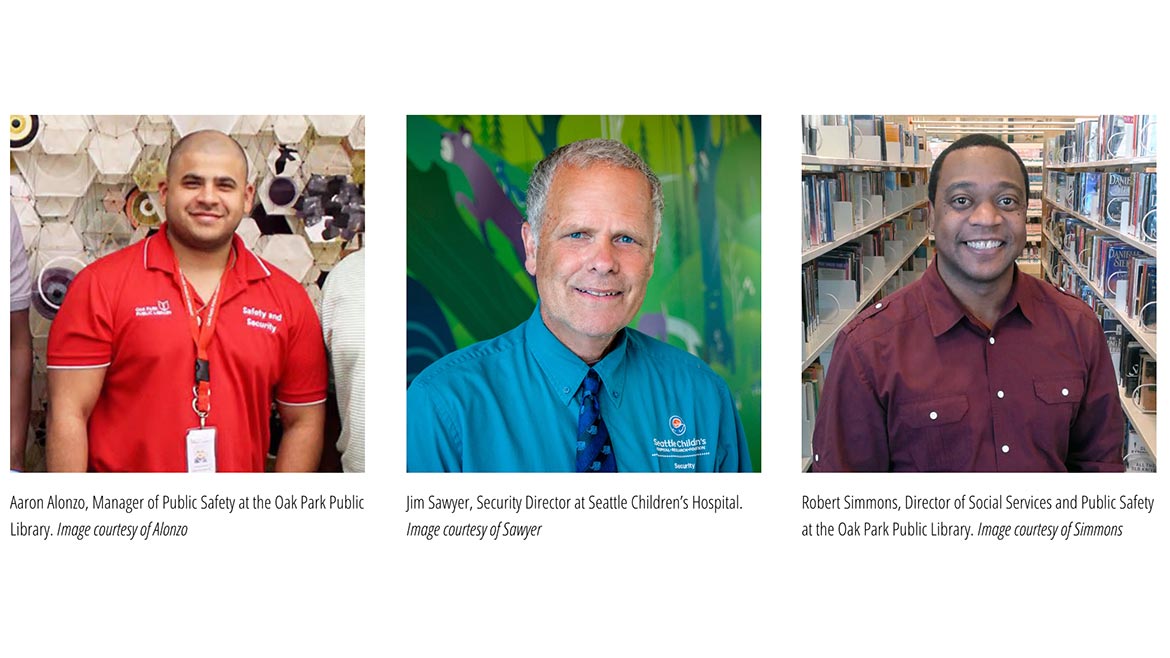 When setting forth expectations for people engaging with your facility, it’s important for any rules to be clear, accessible and evenly enforced. At the Oak Park Public Library, the security team lists guidelines on the library website that outline acceptable behavior and use of the library space.

“We’ve been doing a lot of work in our organization around equity and anti-racism training. I think it’s really important to have equitable and fair policies and procedures, particularly when it comes to behavior. If you’re going to enforce a rule, you have to enforce those rules amongst everyone. You can’t single a certain group out,” says Simmons.

By ensuring that rules apply fairly to everyone, regardless of their housing status or other factors, public safety professionals can build relationships with their communities and mitigate the risk of potential security incidents, Simmons adds.

When supporting homeless people, security leaders should rely on and work with many organizations in their community, says Sawyer. At Seattle Children’s Hospital, the security team liaises with the internal social services department, as well as external organizations, including child and adult protective services, law enforcement, and agencies that specialize in supporting homeless populations.

“Build mutual aid support that can help you,” Sawyer says. “You put that into your curriculum, and that way, you can keep your own place safe while at the same time offering resources to homeless people that come to see you.”

OPPL works with about 40 organizations in the Chicagoland area to ensure the robust support of homeless people. Being able to refer homeless individuals to housing advocacy groups, legal assistance and other resources has amplified the public safety department’s ability to serve people experiencing homelessness, according to Simmons.

Fostering a strong relationship with local law enforcement has also bolstered the security team’s ability to maintain a calm, respectful environment, Alonzo says. By working with law enforcement, library security has been able to advise police officers on the library’s approach to homeless patron support and “how we would like them to come into the building when we’re dealing with certain situations,” he says.

A coordinated community approach can help security leaders provide homeless individuals with the resources they need to obtain housing and receive any assistance they need. Between staff training, setting clear expectations for facility use, and engaging with external partners to support homeless populations, security professionals can promote respect and safety within their communities.