Drones have become increasingly popular tools for law enforcement departments across the country.

Huntsville, Alabama is one such place. Huntsville, with a population of 216,000, prides itself on being a "technology-driven" city, and has been for much of its history. With a drone program that was implemented with careful planning and support from city leaders, the Huntsville Police Department (HPD) aims to support officers with real-time intelligence, as well as collecting forensic and crime scene information.

Unlike some other unmanned aerial system (UAS) programs around the country, this one had support from commanders and city leaders. HPD took about a year to develop and fine-tune their plan and training with support from the police chief and city leaders. This helped them determine mission roles and other important information, allowing them to make the most informed decisions possible.

HPD took an approach they called "patrol-embedded." Drone pilots are patrol officers working across all precincts. This approach was effective for several reasons: "These officers can respond to an event in precinct in under 5-10 minutes, or are on scene anyway as part of their patrol duties," said Chad Tillman, Director of UAS Operations at HPD. "We have also found that this model takes advantage of the officer’s knowledge of the area and each precinct's unique needs." 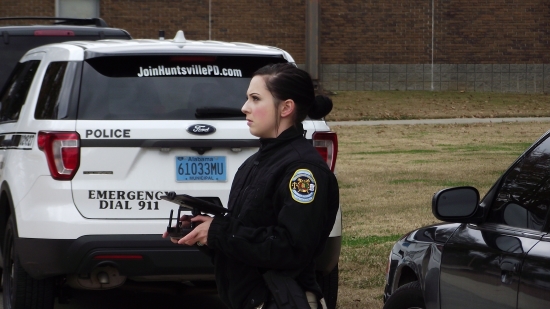 The drone program, which included drones from Autel Robotics, quickly proved its worth, according to Tillman. "Our first operation year, we flew a little over 300 flights with 9 pilots. Last year, we flew 1,500 plus flights. We are able to provide major support to traffic investigation, drug interdiction and special teams. It is still work to help everyone understand how this resource can benefit day-to-day operations, but I am really amazed at the breadth of mission types we are now flying."

Drone use has increased about 300% per year, and UAS played a vital role in a wide range of police missions. In 2021, HPD flew drones 1241 times for a total of 273 flight hours. They have 16 Autel EVO IIs and two Brinc Lemurs S drones. They added 16 pilots to their roster, for a total of 21 pilots and 7 in reserve.

"About 80% of our mission support flights are rated ‘positive effect on mission outcome,’ with 25% rated ‘critical to mission success,’" said Tillman. "The Autel EVO II has been a game changer for us. With its ease of use, long mission time and durability, we know we can trust our aircraft to perform when called on."

HPD plans to continue training officers, establishing command and control infrastructure, and coordinating with other departments.

"We are going to continue with the embedded program. We also are adding trained visual observers," said Tillman. In addition to training 20 to 25 visual observers each quarter and six pilots each year, HPD "will also be training senior pilots to function as NAMACC sUAS ops officers and sUAS traffic management. We are building out an sUAS support vehicle and hope to be able to add a dedicated van in the future."

HPD is also starting a statewide UAS working group to develop the use of technology in law enforcement applications.