The rate of workforce drug positivity hit a sixteen-year high in 2019, according to a new analysis just released by Quest Diagnostics. Positivity rates in the combined U.S. workforce increased in urine drug tests, climbing to the highest level since 2003 (4.5%) and more than 28% higher than the 30-year low of 3.5% recorded between 2010 and 2012.

The Quest Diagnostics findings generally align with other research. Drug deaths in the United States rose 5% in 2019, driven largely by methamphetamine, cocaine and fentanyl, following a decline in 2018. During the first few months of 2020, drug deaths increased about 13% compared with last year, attributable partly to social isolation and other disruptions caused by COVID-19.

“There is no question that before COVID-19, rates of workplace drug positivity were trending in the wrong direction, based on our Quest Diagnostics data, The enormous strain caused by COVID-19 may prove to be an accelerant on this disturbing trend,” said Dr. Barry Sample, senior director of science and technology, Quest Diagnostics. “Organizations will need to consider the impact of COVID-19 not only on workplace safety but also as a health concern for their employees for some time to come.”

In addition to overall increases in workforce drug positives, specific regions of the United States, particularly the Midwest, experienced dramatic increases in positivity for cocaine and methamphetamine as well as marijuana. Marijuana positivity climbed by double digits across nearly all employee testing categories, while opiate and heroin positivity declined. 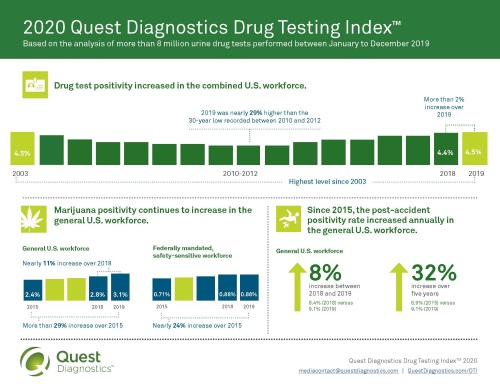 “Testing with multiple specimen types can reveal a fuller understanding of patterns of misuse than one alone,” said Dr. Sample. “Our data suggests that testing for methamphetamine with hair and oral fluid may be appropriate for employers with concerns about misuse of this particular drug to complement the standard urine drug screen.”

Cocaine positivity increases in the Midwest and West 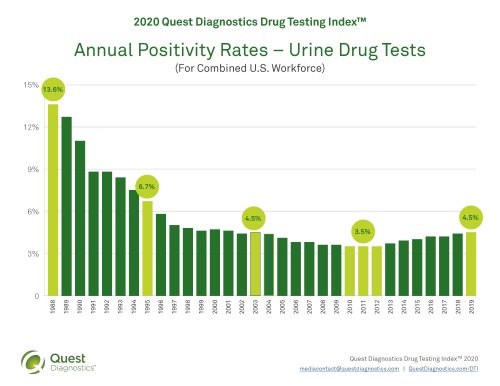 Marijuana continues to top the list of the most commonly detected illicit substances across all workforce categories (general U.S. workforce; federally mandated, safety-sensitive workforce; and combined U.S. workforce, which includes the prior two populations) and specimen types (urine, oral fluid, and hair).

“Marijuana continues to be an enduring presence in the U.S. workforce. Changing attitudes toward its use could pose heightened risks especially in safety-sensitive positions and those states exploring legalization,” said Dr. Sample. 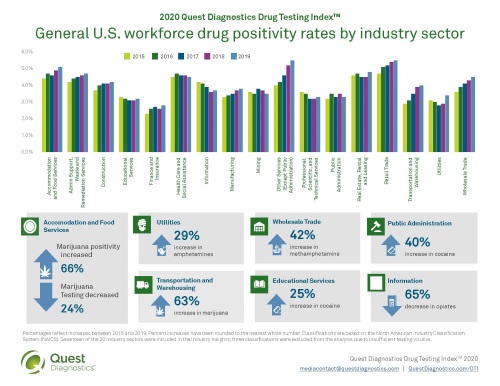 The Other Services (not including Public Administration) category, which includes services not listed in the other categories such as grantmaking, advocacy, and providing personal services, also had a 5.5% positivity rate in 2019. The Accommodations and Food Service category had the highest workforce positivity for marijuana, at 4.8%, a relative increase of 65 % over five years (2.9% in 2015 versus 4.8% in 2019).

For an interactive map with positivity rates and trend lines by three-digit zip code in the United States, visit DTIDrugMap.com.