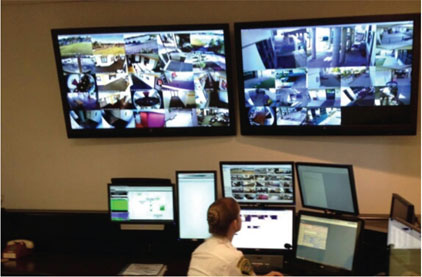 Located in beautiful Mission Viejo, California, Saddleback College offers more than 300 associate’s degrees as well as academic and occupational certificates from 190 programs. With an enrollment of 40,000 students and 1,250 full- and part-time faculty members, Saddleback has an annual operating budget of $90 million. The expansive campus has 54 buildings – encompassing 650,000 square feet – and includes an athletic stadium, golf driving range, and a childcare center.

Saddleback College had no video surveillance cameras and with growing enrollments and increasing acts of violence on college and school campuses throughout the nation, the administration and board made a commitment to deploying a video surveillance solution that would meet specific coverage goals: the Childcare Center, Community Education building and parking lot, Physical Education building, ATM machines, and general coverage.

The Childcare Center, in particular, was a top priority in response to the Sandy Hook Elementary tragedy and other similar violent incidents, said Saddleback College Chief of Police Christopher Wilkinson.

“Because we have a very robust childcare program for our employees and students, we made it our first priority for camera deployment,” said Chief Wilkinson. “We want to be proactive in the face of these vicious criminal acts that are becoming all too common at schools and colleges.”

Wilkinson said they were specifically looking for a video management system that was compatible with access control, user friendly, expandable, and turnkey, but also for a solution that, as an end user, “I didn’t have to buy a large pre-packaged set of options.”

After evaluating systems at neighboring colleges and participating in a Video Insight Pilot Program that provided free use of a few cameras and software, Wilkinson recommended Video Insight Video Management Software (VMS) to the Saddleback board and administration.

The Video Insight VMS solution captures, manages, and stores video surveillance across a network – on a single or at multiple locations – and supports the broadest range of IP and analog camera models. Use via a monitor station, Web client, or mobile app helped make it the right choice for a VMS deployment such as at Saddleback College whose end users consist of seasoned police officers accustomed to dealing with security and administrators who tend to be more occasional users.

Chief Wilkinson chose to use Advidia IP video cameras because, “They were excellent cameras with a wide variety of choices and were unbelievably affordable.”

The mix of day/night, PTZ and outdoor Advidia camera models provide coverage in Saddleback’s established priority areas – the Childcare Center, Community Education, PE buildings, and campus ATMs. Wilkinson said he managed the install himself. “It’s been so officer friendly – I just sit at my desk, go on to the admin, go into the IP address, and do it myself,” he said.

The VMS system operates on two, 48 GB Gateway processors on a rack in a secure, locked-down environment. Saddleback College is currently undergoing a fiber upgrade which will provide the VMS its own dedicated system in the future. The Saddleback College Police Department monitors activity from a video wall consisting of two 52-inch monitors located in the Dispatch Center. There is also an additional 52-inch monitor in the police officer’s report-writing room.

In addition to adding cameras throughout the campus for this deployment, Saddleback College has a sister school and a district office which will also undergo a VMS solution implementation. “We are setting a standard to provide a uniform solution for all of our locations and are excited to be doing so with Video Insight and Advidia,” said Chief Wilkinson.

Chief Wilkinson said he is very pleased with the video surveillance coverage provided by Video Insight and Advidia, and he has even found additional uses for the system they weren’t expecting.

“We have placed four cameras at our Community Education Building so strategically that we achieve 360 degrees of coverage, providing us full coverage of the busy intersection located there,” said Chief Wilkinson. “On the first day of school we saw 21 vehicles run the stop sign at that location and were able to dispatch an officer to patrol that area and oversee traffic control.”

Another incident involved a student with a mental health issue wandering the campus. Saddleback College police officers were able to bring up an image of the student and email it to the health center at the other end of campus. The health center was able to share the image with the campus medical staff which resulted in them locating the student and providing him much-needed assistance.

One of the best uses of the video system, said Chief Wilkinson, is the ability to incorporate speakers and audio, resulting in using the VMS and cameras as a public address system.

“The Advidia A-44 IR camera has the capability of audio in and audio out, so I purchased a group of those with the intent of putting them at the main public doors to buildings because the future here is access control. The speakers and cameras integrate with our access control and when we have a lockdown situation it allows us to communicate with our faculty.”

Wilkinson said they can also use the speakers for emergency management – to announce an active shooter, shelter in place, and weather threats, for example.

“I was beyond impressed,” he said. “I had an idea as to how I wanted this public address audio to work with the Advidia cameras and development made it happen. They didn’t have to – they already had my business and could very easily have said that the system just wasn’t developed to do that, but the Video Insight team went above and beyond in its customer service to make sure that we were a satisfied customer.”