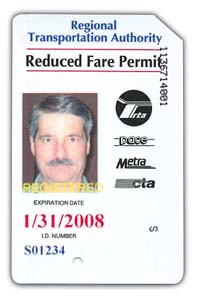 How transit times have changed. There was a time when a passenger needed a pocketful of change to take a bus or train. Numerous transit authorities now have or are changing to magnetic or smart cards, which provide identification and access based on a length of time, such as one day or one month, or an amount of money loaded into the ID.

The shift to cards from coins emphasizes several levels of increased security: there’s less internal theft and loss by eliminating cash handling; transit systems can more easily issue specialty identification cards for reduced fare, student and disabled passenger use; and money can be protected more quickly if a smart card is lost or stolen.

The Regional Transportation Authority (RTA) in Chicago works with an outside vendor to produce reduced fare permit photo ID cards for seniors and people with disabilities. The provider, Polaroid Commercial ID Systems of Waltham, Mass., produces the cards in its Ft. Wayne, Ind., facility.

The RTA is responsible for funding, regional planning and fiscal oversight of all public transportation in six northeastern Illinois counties. Since 1975, the Authority has issued reduced fare cards, allowing senior citizens and disabled passengers to ride at 50 percent of full-fare cost. From the outset, the RTA outsourced management of this specific program, conducting an open bid process every four or five years.

The RTA customer service department and a network of 200 volunteer registration centers assist people to apply for the reduced fare permit. Applicants must submit government-issued identification and a photo. Some centers can snap a photo if one does not exist. The applications and photos go to the Polaroid Ft. Wayne office, where the process leads to the mailing of an ID card where applicable. This year, RTA migrates to an automated process using a Web-enabled system.

In another regional transit arena, the Washington Metropolitan Area Transit Authority is developing a smart card-based fare collection system for that area.

In development is the SmarTrip card, a project that will enable residents of the Washington, D.C., Maryland and northern Virginia metro area to use one card to pay fares across multiple transit systems.

The system, which is expected to grow to a card base of more than one million over a five-year period, will interface with existing installed hardware such as gates and readers.

Beyond transit systems and consumer smart cards, Northrop Grumman is involved in the largest, most influential U.S. smart card project – the Common Access Card or CAC program. The defense contractor has middleware that allows smart cards to communicate with computers and computer applications. Specifically, the middleware under development is for signing and encrypting email, cryptologic network login, client authentication for Web sites and secure data transmission to other applications such as virtual private network, remote access and work flow.

Smart cards, gaining in corporate, government and financial applications, are computer chip-based identification tokens capable of enabling the personal identification and authentication process. The CAC is the U.S. Department of Defense version issued to all active duty, guard and reserve personnel. Many security technologists feel that the standards being set by the CAC effort will set the tone for future smart card developments outside of government and military applications.

Smart cards and multi-technology identification badges are making significant inroads into corporate and commercial applications. A number of vendors now offer transitional cards that blend proximity and smart card technologies and the cost of chip cards is decreasing, too.

The U.S. General Services Administration awarded a $93 million task order to NASA in developing a state-of-the-art smart card for agency employees and contractors to access facilities and information systems, according to the Smart Card Alliance Web site. The “One NASA” smart card will enhance physical security for NASA facilities by authenticating an individual’s identity. It will also provide a higher level of identity assurance for the agency’s information technology systems. With the smart card, employees and contractors swipe it across or insert it in a reader to access a NASA center, facility or computer system.