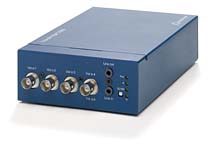 The video transmission standard MPEG-4 is a popular enabling technology for digital security video over Internet Protocol (IP) networks. Initially targeting low bit-rate video applications, the standard has developed significantly over the last few years to encompass a range of applications from mobile phones to set-top boxes. In video over IP applications, MPEG-4 is capable of delivering extremely high-quality video. However, it is not the standard alone, but the implementation of it, that delivers this quality. Not all MPEG-4 implementations are the same.

Building on other well-proven international standards, such as MPEG-2 and H.261/H.263, MPEG-4 offers an interoperable solution for the compression, management and presentation of digital video and audio. Offering improved video compression and quality over its predecessors, combined with a non-discriminatory licensing authority, MPEG-4 has some distinct advantages.

Going beyond its predecessors MPEG-4 offers much more in terms of compression tools that target specific applications. This is achieved through a large array of profiles and levels, for both audio and video, as well as a rich layer of systems level solutions, such as a standardized file format and the management and presentation of multimedia data. Conversely, by not mandating the actual transport protocol, for delivering MPEG-4 data, the standard does not impose any restrictions on the physical communication medium.

One often-misunderstood aspect of the standards, such as MPEG-4, is the assumption that as an open standard, little scope is available to manufacturers to differentiate themselves from the competition. This is far from the truth. MPEG-4 only mandates the syntax of the bit stream that is produced. The standard does not instruct on the design or implementation of the bit stream encoder compression decompression or CODEC. As such the quality and performance of one MPEG-4 encoder may differ wildly from one product to the next. 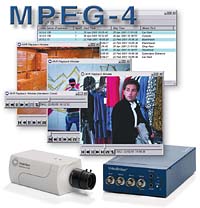 Unlike software-based MPEG-4 video codecs, fully pipelined hardware MPEG-4 solutions require minimal software control for operation and provide a deterministic period of time to encode and decode each frame of video. This latter point is crucial and allows some equipment to operate in a mode where no video frames are ever dropped from the stream. When dealing with high resolution interlaced video security this is fundamental to avoid unpleasant jerky interlacing artifacts.

The rate at which data is generated by an MPEG-4 encoder is set by the encoder’s rate control algorithm. Typically, when motion occurs in the video, the encoder will adjust the pre-determined target bit rate, set by the network administrator, by lowering the quality of the compressed data, in order to transmit the more complex data for the same bandwidth. In security video applications this reduction in potentially both frame rate and quality is often the last mode of operation required during incident-driven motion. MPEG-4 suggests a relaxed rate control algorithm, useful for security video applications over Ethernet. Here the target bit rate is often a function of the recording medium, such as a networked video recorder, whereby the inherent flexibility in the transmission medium can allow for small instantaneous fluctuations in the target rate and hence far less impacted video quality during incident-driven motion.

From California to New York and from Minnesota to Louisiana, life safety and police departments are installing or expanding networked video inside facilities and in public places. Some advances have also caught the eye of organizations which are privacy-sensitive.

The dustup in America is in sharp opposition to law enforcement experiences in countries such as Great Britain.

At the same time Sheriff Stephens is fighting off the ACLU, police in the British States of Jersey were gladly upgrading to digital transmission and recording. Covering the town area of St. Helier and the Police Headquarters, the analog system comprises a number of time-lapse VCRs with the help of systems integrator ADT Security Services.

Jersey Police developed demanding performance specifications. In particular, the system had to be capable of handling 60 camera inputs at 25 frames per second, at full resolution (4CIF) and with full-frame refresh, something that not many systems were able to achieve.

“The key issues are picture quality, recorded image integrity and authentication, and a reduction in the amount of officer time spent when retrieving archive recordings,” Gary Buesnel, head of communications for Jersey Police, says.