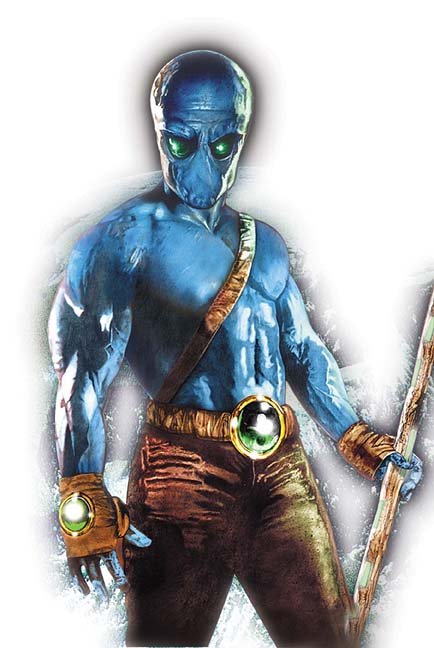 Protection of buildings from forced entry calls for more than a comic book hero. Future threats will come from people carrying and driving in explosives. Artwork of Zen, who hunts terrorists, from Zen Comics, Los Angeles, and Canadian publisher SSS Comics. Photo: PRNewsPhoto
It may seem that troubling reality is blurring with futuristic science fiction. For example, a comic book hero, Zen intergalactic mercenary, now fights terrorists who possess deadly new weaponry. Jump back to today and many government and corporate security executives now face attacks on their facilities never imagined just a few years ago. And they are fighting back with diverse tech weapons, too. There are three types of exterior terrorist concerns that relate to the selection of threat resistant window and wall systems: forced entry attacks, ballistic attacks and blast attacks

Forced entry attacks relate to burglaries and civil disturbance threats. HP White Specification 02: TP-05000.02, dated September 1993, indicates five levels of force entry protection against various types of attacks. These include blunt impact (hammers), sharp impact (chisels), thermal stress (torches) and chemical deterioration (solvents). The levels of protection relate to either the number of impacts a forced entry protected assembly will withstand or the time, in minutes, required to bypass a forced entry protected assembly with the use of torches or chemical agents. Level I offers the least amount of resistance protection; Level V offers the most amount of resistance protection.

Blast attacks relate to explosive bomb threats. The Interagency Security Committee of the U.S. General Services Administration (GSA) developed criteria for blast mitigation design for window systems, which includes performance conditions, or acceptable protection levels from the glass shrapnel fragmentation hazards with a bombing event, and building blast category, or building types and their applicable levels of protection, which also directly relates to the blast level.

These criteria indirectly reflect the velocity and (hence lethality) of glass fragments based on their distance from the window threat. The GSA information is part of a comprehensive security criteria provided in their GSA Security Criteria, dated Oct.8, 1997, which was further clarified with their GSA Facilities Standards For Public Service, or PBS100, dated March 2003. With regard to protection levels from glass fragmentation, GSA criteria indicates five levels of blast resistant performance conditions or acceptable maximum damage level.

Level 5 blast-protected assemblies provide low performance condition protection and are the least resistant, where window systems fail “catastrophically” and glass fragments enter space behind the window, impacting a vertical panel or wall at a distance of 10 feet from the window face. 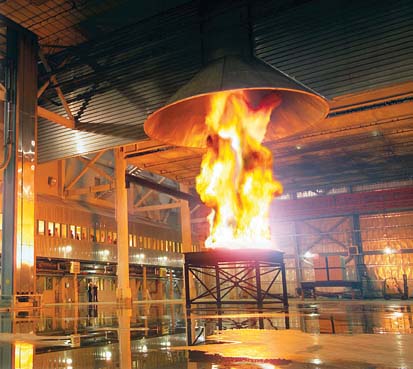 Research continues on how facilities can secure against new-age forced entry attacks as well as natural disasters. Just months ago, FM Global of West Glocester, R.I., opened a new $78 million research campus to analyze devastating fires, explosions and electrical hazards. Photo courtesy of FM Global
It should be noted that GSA criteria does not address two significant concerns: the lethality of Level 4 performance for those persons sitting within ten feet of their windows, and the lethality of Level 3 performance in the absence of demonstrated proof that the quantity of shattered glass in the Level 3 area is limited to less that 500 grams of glass.

Typical governmental facilities, including industrial facilities, are recommended to have at a minimum GSA building category of Type C, with peak pressure of 4 psi and blast impulse of 28 psi-ms for the SMUD facility. To square this inconsistency, it is advisable, where possible, to specify a blast mitigation window film and attachment system that has been tested to comply with the following:

1. The test section must show the recording of the amount of glass fragments, by weight, which entered the test cubicle in the case of GSA class 3A or 3B. For category 3B performance, the total glass fragment mass must be recorded in zones 3A and 3B.

2. The test section must show (for at least three tested specimens) the recording of no more than a medium mass level of glass fragmentation (less than 501 grams of glass particulate) in zones 3A and 3B.

3. The film attachment and/or restraint system must be tested to both pass and failure levels of blast overpressure. Critically, the tests must demonstrate that when the system fails, it does not detach from the window frame, thereby adding an additional hazard to the internal environment beyond that which is present from the glass and film.

If these requirements are not specified, there is a danger that the blast load will be transferred to the window frame and cause failure.

Any restraint system must be proven to reduce the dynamic load transferred to the window frame through elastic absorption or ductility.