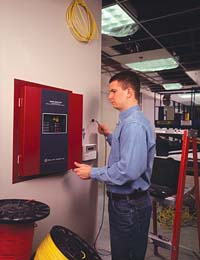 In an upgrade of the fire alarm system at the Savannah College of Art and Design, Fire-Lite MS-9200 panels are the foundation of a system that can pinpoint an alarm across a 60-building campus.

With 60 buildings and more than one million square feet, a Georgia college knew it was time to update its fire alarm system to better pinpoint alarms, centralize monitoring and accommodate student special needs.

The Savannah College of Art and Design in Savannah, Ga., is located in the city’s historic Victorian district and includes several prestigious structures, most of which date back over 100 years.

Since 1978, the college has acquired and renovated several local buildings that had been abandoned and lying vacant, deteriorating and unused. The college has enjoyed regular praise from Savannah’s historical associations for its careful attention to the preservation of its architectural attributes. Understandably, the college’s outdated fire alarm system was one area that could not be preserved – it was in dire need of modernization.

The college’s buildings were equipped with five-zone conventional panels and 110-volt smoke detectors, which were unable to pinpoint the exact location of a fire. With these obsolete detectors, the college’s fire prevention system posed a major threat to the lives of its more than 5,800 students and faculty. Moreover, the college lacked a centralized alarm control center, making it nearly impossible for maintenance personnel to detect when an individual alarm went off in a facility. The college also needed to improve handicapped accessibility, to make it easier for students in wheelchairs to exit quickly in a fire. To prevent potential disaster, college officials knew they needed to upgrade their current fire alarm system quickly and cost-effectively.

To ensure that the highest quality and most dependable fire detection system would be provided for its students and faculty, college officials worked with Global Security Industries, a security installation company. After evaluating several fire alarm systems, Global turned to Fire-Lite Alarms of Northford, Conn., to update Savannah College’s fire protection system.

“We assessed the facility and the situation, and then decided that the most effective system for a school of this size and age was Fire-Lite’s MS-9200,” says Tom Glendinning of Global. The MS-9200 is a compact, addressable fire alarm control panel with the capacity to control 198 Fire-Lite 350 Series devices. It was installed in nearly all of the 40 buildings on campus. In addition to the panels, Global installed addressable smoke detectors in each of the dorm rooms.

To better accommodate handicapped students, monitored smoke detectors and control relays were installed to unlock doors automatically in the event of a fire. Students in wheelchairs have magnetic locks on their doors them and fixed-release buttons in their rooms. The college provides them with remote-release buttons to carry when they leave their rooms.

The day after the system was installed, the fire alarm went off.

Because of the new MS-9200 fire alarm system, the building maintenance attendant could immediately pinpoint where the smoke was coming from.

As it turned out, a student had just finished cooking some bacon, thought she had turned the burner off and proceeded to take a shower. The point identification on the addressable panel allowed the maintenance attendant to get to the room and find the red hot pan before it ignited, faster than the student had been able to get out of the shower and put on a robe.

If this same situation had occurred just one day earlier with the prior system, only the local smoke detector would have sounded in the student’s room-no one outside of her room – would have been alerted, resulting in a possible catastrophe.

“We have always been able to rely on Fire-Lite, not only for their exemplary product quality, but also for their technical support and superior customer service,” contends Glendinning. “Once again, we are very pleased with the system that we installed.”