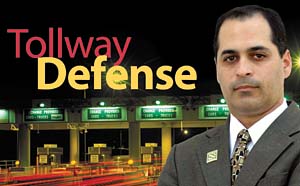 No matter day or night, tollway plazas have security video protection to proactively measure and reduce risk. Shown is Florida’s Sunshine Skyway North toll plaza.
And, according to Richard Arce, the best tollway defense is a solid offense. As loss prevention and security manager for Florida’s Turnpike Enterprise, Arce inherited a reactive unit. “We put out fires,” he said. “My idea was to create a proactive program.” In just a matter of busy, hard-muscle months, “we changed our direction.”

Florida’s Turnpike Enterprise is part of the state’s Department of Transportation. “I’m responsible for the security of over $500 million collected annually, over 100 toll facilities and over 2,000 toll employees” in a state that’s long on parkways, expressways, beltways, mainlines and connectors and just as big on the number of citizens and visitors using the turnpike system.

In April 2003, Arce implemented a security and loss prevention program that has become the most proactive program in the Department. “My investigators have recovered thousands of dollars through their covert surveillances and criminal interviews. We are also in the midst of upgrading our current controlled access and security video system, to make it into a state-of-art.” The security manager’s aim is simple but challenging: Create a cost-effective surveillance system to allow management to view any of the Turnpike’s security cameras throughout the state.

Richard Arce conducts a vulnerability assessment of the security video system at a toll facility. Next to him is Rich Kurowsky from E-Transit.

With the Sunshine State’s Transportation Department since 1993, Arce had the opportunity two years later to be part of its investigative arm. After six years as an investigator, the executive moved back to management and operational compliance. “That’s when I decided I really wanted to significantly change the direction of the program,” he said.

Transforming security’s mindset from reactive to proactive is a goal that Richard Arce shares with many of his colleagues. There have always been officers on patrol, and more recently, electronic security systems to identify perpetrators and deterring crime. More recently, and especially as business management concepts have impacted the security profession, executives have created programs that better evaluate risk, intelligently apply protection electronics to analyze, pinpoint problems and deter in a longer-term way.

Arce brought into the equation a sense of direction. “It’s essential to know where we want to be in the future.” He wrote a security mission statement that more directly helped support the overall mission of the transportation department. “If your people do not feel safe, they will not be confident. So we are dedicated to safety for our own people and our customers.”

With the operation of tollway systems across the United States extremely visible to concerned constituencies, it was also important to Arce to contend with how to handle security and loss prevention of such scope in a cost-effective manner. “I believe it was critical to integrate the investigative unit so that it became part of the important measures of revenue within the total organization.”

A proactive approach, coordinated with an investment in electronic security, was a crucial step, too. The security operation has four investigators. “If we were to sit back and wait, we would lose. So we go out to the physical sites and conduct security reviews, what I call vulnerability assessments,” Arce said.

The loss prevention and security operation is upgrading from analog to digital video surveillance as well as networking among a hundred, far-flung facilities while also aiming to integrate the security system into turnpike toll payment transaction information to close yet another loop. “Our backbone will be fiber,” he said.

Richard Arce sees digital video approaching dramatically and quickly over the tollway horizon. “Security video has already been a major boost. The digital world makes it even easier. We see video as a way to handle false claims such as people claiming their vehicles were hit by toll gates as well as in workman’s compensation cases, for example.”

Digital video records are the base as well as the networking of multiple sites. “With more than adequate (image) storage and IP addressability for access to any digital video recorder, we also are looking at the need for more cameras per each site,” he said. Wireless security video will also play an important role. There also are plans for covert video for transaction investigations with sites to be determined by auditing red-flags.

Florida’s Turnpike Enterprise, similar to other tollway operations in the United States, is fast moving from cash transactions to an electronic prepaid toll program. To Arce and his investigators, that also means responding to new threats and risks with new skills, investigations and electronics. “The SunPass (Florida’s prepaid transponder program) presents its own unique security challenges,” admits Arce.

There are issues of stolen transponders; the opening of fake accounts with stolen credit cards; and there is a need to upgrade internal processes in keep pace with such electronic prepaid toll programs. “In this future world as well as currently, there is importance for strong links between law enforcement and our operation,” he said.

In addition, Arce is as committed to upgrading the educational backgrounds of staff as he is with upgrading security electronics. “All our investigators have college degrees. It’s a matter of improved standards.”