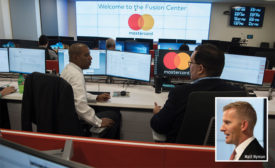 When it comes to addressing global fraud and security in the financial sector, it takes a network to defeat a network.

With so many government agencies and departments involved in security operations abroad (such as eliminating key targets or searching for specific terrorists), the essential flow of information was so slow and clunky that only three operations could be coordinated each month.

The New York Police Department is testing software that uses neighborhood-specific data and past criminal activity to create statistical models that forecast where and when certain crimes are likely to occur.

New York Governor Andrew Cuomo announced Monday that the New York State Intelligence Center has relocated to the Center for Internet Security in East Greenbush, New York, putting the state’s primary cyber security protection agency under the same roof as a leading nonprofit organization dedicated to enhancing cyber security readiness and response around the globe, according to a Long Island press release.

The Philadelphia project has spent roughly $2.3 million since 2006, but little has actually been accomplished on the counterterrorism center.