This website requires certain cookies to work and uses other cookies to help you have the best experience. By visiting this website, certain cookies have already been set, which you may delete and block. By closing this message or continuing to use our site, you agree to the use of cookies. Visit our updated privacy and cookie policy to learn more.
Home » Blogs » Security Blog » Look Up in the Sky: It’s a Bird; It’s a Plane; It’s a High Tech Dirigible

Look Up in the Sky: It’s a Bird; It’s a Plane; It’s a High Tech Dirigible 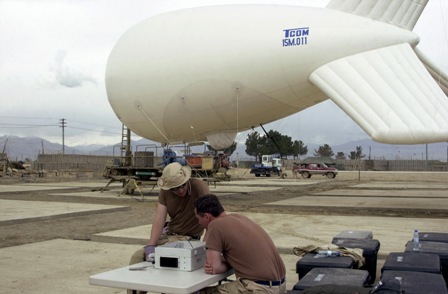 The skies over the Utah desert, according to an Associated Press report released to the Security Blog through a DHS briefing, are becoming the test site for a new fleet of hulking, high tech dirigibles the U.S. military hopes will provide battlefield commanders a bird’s-eye view of cruise missiles and other threats. One of the unmanned balloons — a 242-foot-long craft known as an aerostat — was launched Wednesday morning about 80 miles west of Salt Lake City. It stayed aloft for about three hours before it was pulled back down. It was the first of several tests expected in the coming year or so in Utah, according to a spokeswoman for Dugway Proving Ground. Vast tracts of military-owned desert were chosen for the testing because of their remote location and resemblance to the mountainous, arid environment of Afghanistan, the military said in a statement. The dirigibles are outfitted with radar and communications systems to provide long-range, surveillance targeting threats from aircraft, ballistic and cruise missiles. Military officials said the aerostats will be less expensive to maintain and operate than conventional aircraft-based radar while providing battlefield commanders a bird’s-eye view of threats in a given area.

Pictured: The US Army (USA) Space and Missile Defense Plan from Huntsville, Alabama (AL), conducted a test with its Rapid Aerostat Initial Deployment System (RAIDS) at Bagram Airfield in Afghanistan (AFG), during Operation ENDURING FREEDOM. The RAIDS can serve as a weather station, laser range finder, and can also be used to track enemy personnel. Contractors are making final adjustments to some of the equipment. Photographer: SGT VERNELL HALL, USA

More information on unmanned air and underwater vehicles at www.securitymagazine.com