This website requires certain cookies to work and uses other cookies to help you have the best experience. By visiting this website, certain cookies have already been set, which you may delete and block. By closing this message or continuing to use our site, you agree to the use of cookies. Visit our updated privacy and cookie policy to learn more.
Home » Blogs » Security Blog » Need a Safe Room for Your Corporate VIPs at Home? Resilient Homes can be Last Room Standing

Need a Safe Room for Your Corporate VIPs at Home? Resilient Homes can be Last Room Standing 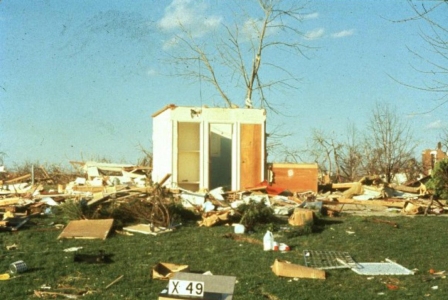 While this photo does not represent modern safe rooms, the interior room that survived a tornado in Xenia, Ohio, reminds us just how critical safe rooms could be.

For 18 horrific hours on April 3, 1974, the largest and most cataclysmic tornado on record for a single 24-hour period took North America by storm. Actually, it was 148 tornadoes, which spun through and sacked 13 states and one Canadian province, ravaging some 900 square miles and killing 148 people.

An iconic photo – see it at right -- snapped in the tragedy’s aftermath speaks the proverbial thousand words: amid trees knocked down like matchsticks and houses crushed like eggshells, one thing remained intact, standing erect and defying nature’s wrath: an interior bathroom, whose walls had not been connected to the rest of the house. This image demonstrates how a single room can withstand the wrath of a tornado and serve as a safe haven.

Today, a consortium of government officials and academics works to raise awareness about the life-saving capabilities of storm shelters.

The team is a who’s who of researchers and atmospheric scientists and includes the Department of Homeland Security Science and Technology Directorate (S&T); the Federal Emergency Management Agency (FEMA); the Southeast Region Research Initiative (SERRI); the Walt Disney World Resort; the International Code Council (ICC); the Federal Alliance for Safe Homes; and the Oak Ridge National Lab.

The focus of their activity is a pilot project called the Resilient Home Program, which is funded in part by S&T’s Infrastructure and Geophysical Division. The program incorporates newly revised guidance from FEMA on designs for basement, in-ground, and above-ground safe rooms; and an ICC standard, which specifies requirements for the design and construction of such sanctuaries.

The program takes place in the American Southeast, a region that draws tornadoes with a frequency and fury that rival the famous “tornado alley” of the Midwest. Making matters worse, the Southeast is a magnet for nocturnal storms, which strike between sunset and sunrise and often double the fatalities of their daytime counterparts. Furthermore, the Southeast’s population is particularly vulnerable to disasters, with large numbers of seniors and mobile homes.

Last year, tornadoes pummeled homes and farms in 18 FEMA-declared disasters, stretching from Florida, through the South, and up into Illinois. So far this year, tornadoes have been a part of six more disasters, most recently in Oklahoma and Mississippi. On May 10, 2010, at least 22 tornadoes tore through the Sooner State on a single day, ripping off metal roofs and killing several people. In the Magnolia State, an unusually high number of homes in the storm’s path—more than half—were destroyed on April 24. Each flattened wood frame left behind a reminder about the need for a pocket of space that can turn back a howling twister.

And the tornado season is far from over.

“The Resilient Home Program isn’t a 30-page report that winds up in a binder on a bookshelf,” says S&T program manager Mike Matthews. “It’s a roll-up-your-sleeves collaboration among many different entities — homeowners, builders, and insurers — that will help to fortify people’s homes, lives and communities.” As Matthews sees it, the sooner families can return to their homes, the faster a community can recapture its vitality.

To meet these goals, the team is undertaking a two-part process. First, the research: Why do some homeowners opt for safe rooms while others go without? Then the outreach: Use these findings to communicate with the public and the construction and insurance industries.

The team surveyed 822 homeowners in seven states: Alabama, Florida, Georgia, Kentucky, Mississippi, South Carolina, and Tennessee. The online forms asked participants a battery of questions about their knowledge of and interest in safe rooms. “The more we understand about how people perceive safe rooms, the more success we’ll have in increasing their number,” says Matthews.

From their answers, certain patterns emerged. For instance, homeowners are well-aware that safe rooms can save their lives. Yet they see little value in investing in something that would be used so little or perhaps not at all. For that kind of cash (about $10,000), they’d rather buy a home theater or remodel their kitchen. So the team decided to brand safe rooms as a home-furnishing project—something fun rather than a necessary evil. After all, from bathrooms to bedrooms to boardrooms, there’s a reality show on remodeling it.

The messaging was refined in March in focus groups with remodelers and builders. Further creative honing has continued in recent months via interviews with consumers and meetings with insurers to identify incentives that will defray construction costs. In the meantime, the team is engaged in good old public relations, promoting Resilient Homes via TV segments, partnerships, speeches, workshops, demos—and articles like this one.

In an unrelated action, the Department of Homeland Security (DHS) announcement of adoption of standards for the Voluntary Private Sector Preparedness Accreditation and Certification (PS-Prep) program marks a major milestone. Under an agreement with DHS, the ANSI-ASQ National Accreditation Board will be the accreditation body for the PS-Prep Program. Accreditation will be offered under the ANSI-ASQ National Accreditation Board’s ANAB brand. “Private organizations across the country — from businesses to universities to non-profit organizations — have a vital role to play in bolstering our disaster preparedness and response capabilities,” the DHS Secretary said. “These new standards will provide our private sector partners with the tools they need to enhance the readiness and resiliency of our nation.” The adoption of the standards — developed by the National Fire Protection Association, the British Standards Institution, and ASIS International — was published in a June 16, 2010, Federal Register notice following a series of regional public meetings and the incorporation of public comments.

On the information security side, the biggest vulnerabilities in the enterprise might be items people see every day — and just don’t think about. Experts say that vulnerability assessments often overlook the everyday dangers: Network-attached devices that aren’t computers; paper documents; passwords posted in plain view; portable storage devices. Most of these are technologies that would never be taken into account by a traditional vulnerability scan. Yet they could lead to data leaks just as surely as a keylogger or a data-stealing Trojan, experts say. “Peripheral devices on the network may have capabilities the business doesn’t know of,” said a delivery manager for custom testing at security assessment firm ICSA. “And those capabilities can create security vulnerabilities.” Printers, fax machines, and multifunction devices with persistent storage could all serve as entry points for a sophisticated hacker. And the presence of internal storage might not be clear at first glance, nor does it necessarily show up on traditional security audits. A thorough vulnerability assessment should include examining all hard-copy devices for internal-storage capability — this could require contacting the manufacturer or even opening the machine. Enterprises also should take steps to ensure that digital files are wiped from these devices as soon as the hard copy is produced or the fax transmitted. This could mean purchasing and installing additional software from the manufacturer.

Hve you set up a safe room for a VIP’s home? Email your comments to zaludreport@bnpmedia.com