On a Wing and a Prayer – And a Security Alert 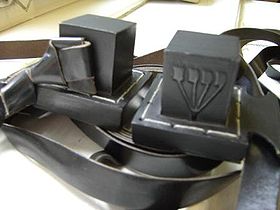 A teenager’s tefillin — leather boxes that are strapped to the forearm and forehead during prayers by certain Jewish sects — caused an emergency alert early this week by passengers aboard a New York-to-Louisville commuter plane. When they saw the objects, passengers notified the plane’s crew, which diverted the plane to Philadelphia International Airport. The man was removed from the plane for questioning by local and federal law enforcement officials. During the incident, numerous roads around the airport were closed as a precaution. No charges were being filed.

While rare, religious objects and practices have generated security alerts at airports, in planes and at gatherings of large crowds. Another example: the kirpan is a ceremonial sword or dagger that worn by baptized Sikhs.

Originally tefillin – pictured here -- nowadays are worn during a weekday morning service instead of all day. A small minority still follow the practice of laying tefillin all day long.