The International Foundation for Protection Officers recently released the findings of their security officer research project, a report titled “The Competence of Frontline Workers and What They Say About Their Work.” The survey of 10,625 security guards around the globe sought to identify the wide range of responsibilities held by security officers, the complexity of those tasks and frontline security officers’ perceptions of their field.

The report begins by noting the negative stereotypes of security officers, including laziness and a lack of competence in the skills necessary for their job. In response to this perception, the report surveyed guards from Canada, Ecuador, India, Ireland, Nigeria, South Korea, Saudi Arabia, the United Kingdom and the United States to determine their thoughts on the role of a security officer. The report also collected demographic data about the field, aimed to identify knowledge gaps around important guarding tasks and analyzed regional patterns present in the results.

The Demographics of Security Officers 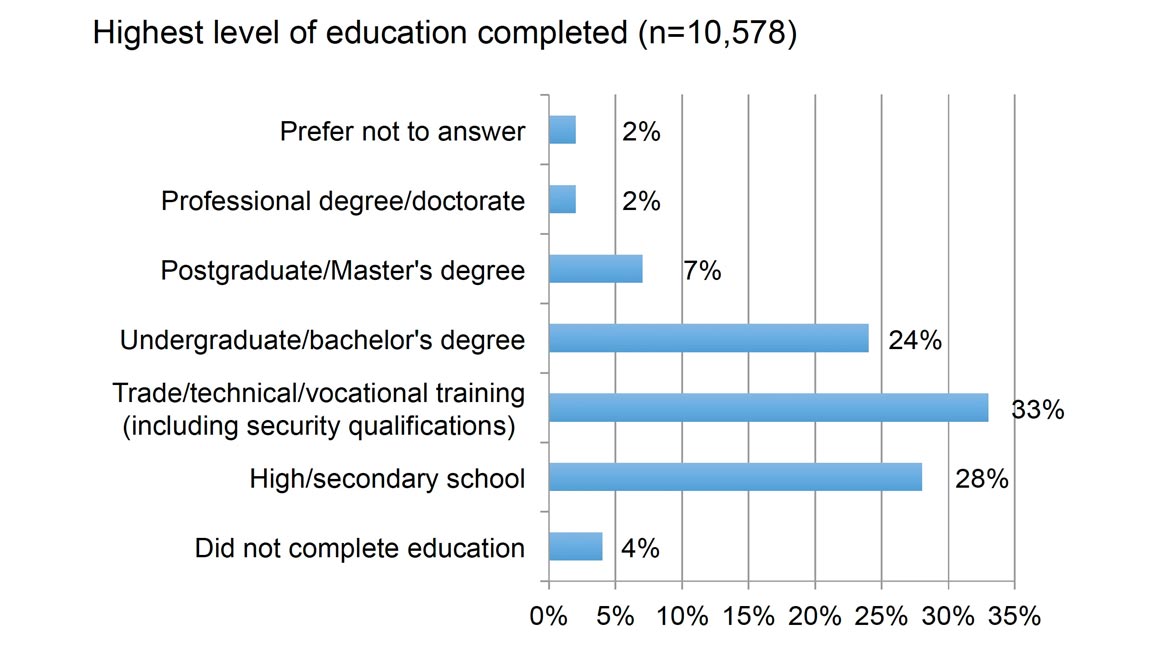 This table displays the highest level of education completed by frontline security officers, ranging from earning a doctorate to not completing an education. Image courtesy of the International Foundation for Protection Officers

When it comes to education, nearly one-quarter (24%) of respondents indicated they had earned an undergraduate/Bachelor’s degree. One-third of security officers surveyed had completed trade/technical/vocational training, which included security qualifications, and 28% indicated that their highest level of education was secondary/high school. The report noted that these statistics suggest that “some security officers/guards are quite well educated,” with the highest level of education reported by any respondent being a doctorate or professional degree (2%).

According to the report, 39% of security officers reported working in-house, followed by 35% working as contract guards. Seventeen percent of respondents indicated that they were self-employed. The top three sectors where security officers report working were banking/financial services (11%), colleges/universities (9%) and government services (7%).

Presented on the backdrop of the COVID-19 pandemic, security officers responded to survey questions about their tasks and the difficulty levels of those tasks, which have changed and expanded over the last year and a half. “One of the key learnings of the security sector from COVID-19 is that its work generally, and that of security officers/guards specifically, is ‘essential,’ and yet largely unheralded,” according to the report.

In addition, the report presented security officers with a list of tasks and asked them to rank the responsibilities as either “core,” “marginal,” or “not applicable” to their role. The duties included access control, physical patrols/surveillance, customer service, monitoring/managing alarms or emergencies, enforcing rules and conducting basic investigations. 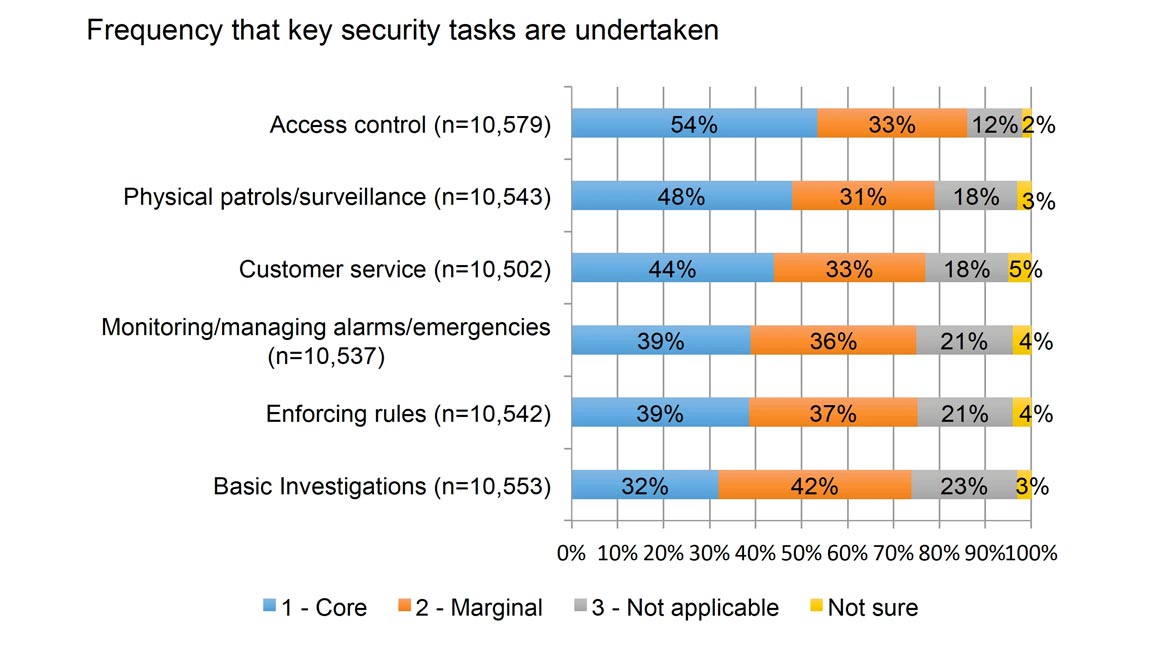 Fifty-four percent of surveyed security guards listed access control as one of their core tasks on the job. Physical patrols/surveillance followed, with 48% of respondents categorizing the task as integral to their duties as a security officer. Customer service ranked above tasks such as alarm and emergency management and rule enforcement, with 44% of security officers noting it as a core responsibility.

When analyzed by sector, the frequency with which security officers performed these tasks varied greatly from the overall data. For example, in the transportation and warehousing sector, 79% of respondents said they performed duties relating to access control “often.” According to the report, security officers working in the healthcare sector were the most likely to enforce rules “often,” with 53% of respondents selecting that frequency. Security guards working in the property management and/or real estate sectors indicated that they “often” (55%) monitored and managed alarms more frequently than those in other sectors.

The report also asked respondents to rank the difficulty level of each security task by marking each duty as “easy,” “average,” or “difficult.”

Customer service and physical patrols/surveillance were seen as the easiest tasks by respondents, with 50% and 49% of security officers categorizing the tasks as “easy,” respectively. On the other hand, enforcing rules were perceived as “difficult” most often by security guards (13%). Aside from rule enforcement, over three-quarters of respondents categorized all tasks as either an “easy” or “average” difficulty level. 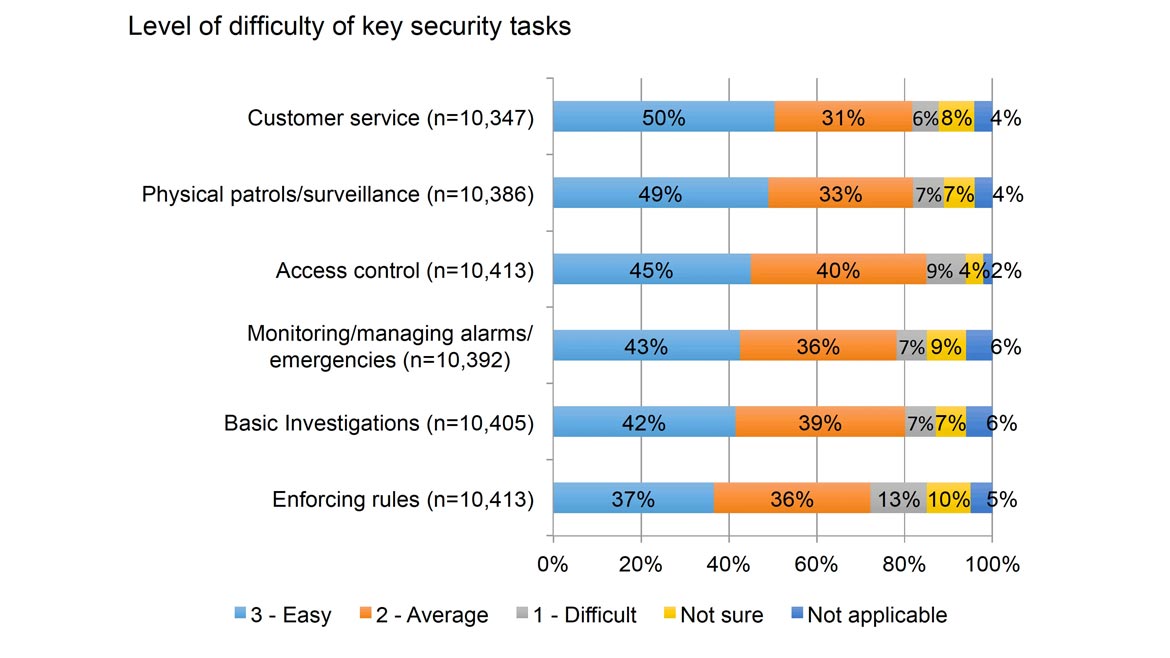 This graphic displays the respondents’ assessments of the difficulty levels of duties and skills required of frontline security professionals. Image courtesy of the International Foundation for Protection Officers

Unlike the previous task frequency ranking, the overall data did not differ significantly from data broken down by sector, meaning that the perceived difficulty levels of security officer duties remained similar across all industry sectors. The report did note some differences in perception across age groups, with respondents over the age of 56 being more likely to rank customer service as “easy” than the average overall response.

After ranking their own perceptions of common tasks, respondents were asked to assess the competence levels of their peers when it came to 15 duties undertaken by most security officers, including customer service, emergency response, situational awareness and more. 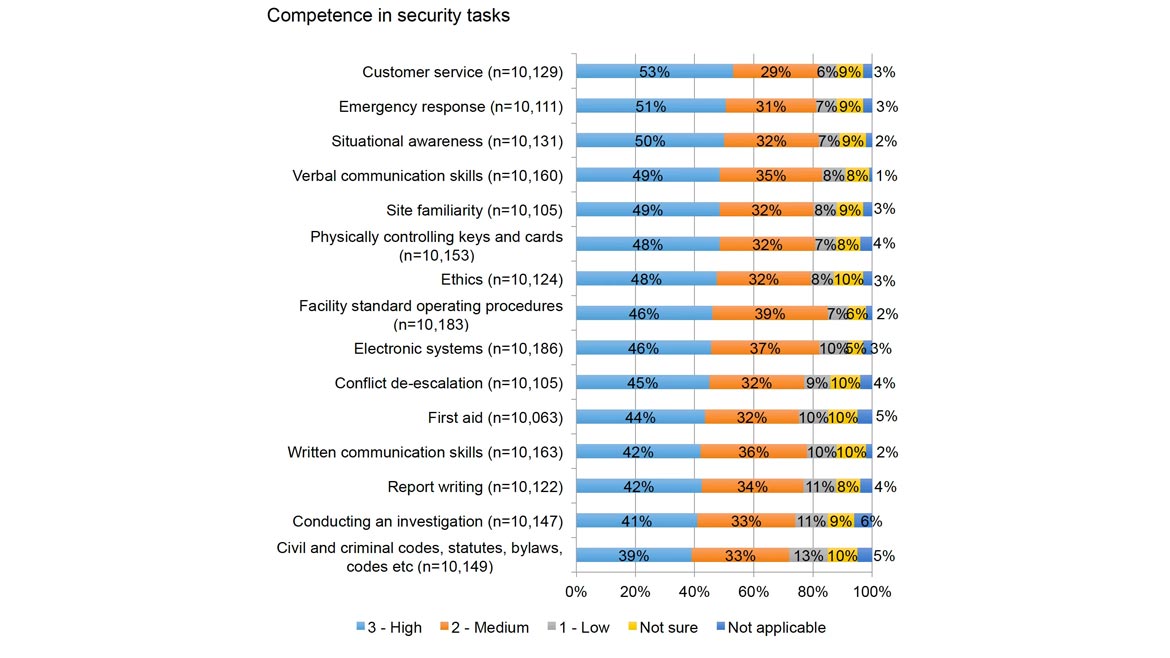 The IFPO report shows how respondents ranked their coworkers’ and peers’ levels of competence regarding various security tasks. Image courtesy of the International Foundation for Protection Officers

The report highlighted the “encouraging” fact that a low proportion (between 6% and 13%) of security officers perceived their peers’ competency levels as “low.” However, the results of these rankings reveal room for improvement, with only 53% of surveyed security guards ranking their peers’ competence as “high” for any given task.

Customer service, emergency response and situational awareness were the top three duties perceived to be accomplished with a “high” competence level. Just behind those tasks were verbal communication skills and site familiarity (49% ranked competence levels as “high” for each task).

The report identified some areas for improvement — written communication skills and report writing were both perceived as being completed at a “low” competency level by 10% and 11% of respondents, respectively. By this measurement, the skill least likely to be mastered by security officers is knowledge of criminal and civil codes, statutes and bylaws.

The Challenges of Security Guard Work

In addition to covering guarding tasks and competencies and asking respondents about job titles, use of force habits and what equipment they carry on the job, the IFPO report interviewed select respondents about their perceptions of security officer work. From the one-on-one interviews, the report found trends in concerns relating to worker morale and retention, conflicting responsibilities and poor management practices, among other issues.

Morale among frontline security professionals was found to be low in one-on-one interviews, with interviewees mentioning the low rate of pay, lack of incentives and the at times overwhelmingly high level of responsibility shouldered by security officers. One respondent said, “Personally, I [have] to cover a lot. I have a large bank of CCTV with 48 external cameras and another 15-20 internal cameras, [an] access control system with my own PC, fire alarm system, environmental systems, gas alarms systems and main facility alarm, so it can be fairly hectic.”

Low retention rates among frontline security personnel are also a top-of-mind concern for interviewees. The report stated that many interviewees noted a “culture of underbidding in the security sector” and a tendency for organizations to use security guard contractors that do not specialize in security, such as a cleaning or maintenance company that also provides security officers.

According to one interviewee, “The problem is the cost and also pay rates are low. Contractors undercut each other, and then the reputable companies get cut out, and the guards then suffer.” This issue, paired with a lack of support from management and the feeling of being overworked and underpaid, has resulted in some negative perceptions of the security officer position from those who work in the field.

Another challenge in the security guarding industry highlighted by the report is the presence of sexism and homophobia. The report interviewed six women about their experiences regarding sexism while working as security officers. One security officer said, “There aren’t many women in the security industry, and those I come across tend to have reception-type duties. Women aren’t represented fairly in senior positions.” Investing in remedying the gender gap in the security industry and seriously considering women for promotions could help solve this issue.

Another security guard detailed the lack of support they felt when they experienced discrimination on the job, saying, “I’ve come up against sexism and homophobia in some shops, and they say they don’t have another shop for you, so they say, ‘put up with it, or we’ll fire you.’ So, I quit.”

Security guards face more than just stereotypes about their work ethic — they also deal with understaffing, discrimination and low prioritization from management. Noting these challenges can help the direct industry efforts toward resolving the most pressing issues facing security officers/guards. With the data and detailed personal experiences provided by this report, security professionals across the industry can identify the strengths and work to fix the weaknesses of the frontline security officer profession.

To find more information on this report, including additional demographic data, sector information and suggestions for improving training procedures, go to securitymagazine.com.