This website requires certain cookies to work and uses other cookies to help you have the best experience. By visiting this website, certain cookies have already been set, which you may delete and block. By closing this message or continuing to use our site, you agree to the use of cookies. Visit our updated privacy and cookie policy to learn more.
Home » Aaron Schneck: Beyond locking and unlocking doors
ManagementSectorsThe Security Benchmark ReportSecurity Enterprise ServicesSecurity Leadership and ManagementHospitals & Medical Centers
The Security Benchmark Report – Leader Profiles

The healthcare system is currently building an additional hospital in Venice, Fla. that will be completed around November 2021 and will serve Southern Sarasota County residents with 110 private rooms, a 28-room emergency care center, eight surgical suites and a pandemic-ready intensive care unit.

Sarasota Memorial is also the county’s largest employer, with a staff of more than 7,000, more than 750 hospital volunteers and a nine-member, elected and unpaid Sarasota County Public Hospital Board that governs the organization. Overseeing the security of employees and patients alike is the public safety and security department, made up of approximately 75 full-time, in-house employees. Aaron Schneck, Chief – Senior Manager of Public Safety at the Sarasota Memorial Health Care System, says the organization is “a city within a city.”

Just as the hospital system grew since its beginnings in 1925, so has the role of Sarasota Memorial’s public safety staff. Schneck started at the flagship hospital as a security officer and was promoted up the ranks to his current position as Chief. “When I first got here more than 12 years ago, the department looked a lot different,” Schneck recalls. “We were unlocking doors and providing escorts. Now, we are a full-service department that is no longer in its own silo, sitting with the clinical staff and really acting more as a partner than just a background supporter.”

Recently, the hospital team took the evolution even further, integrating security and public safety with the organization’s emergency management team, which both report to a system-wide director. The move has truly integrated the roles of security, safety and emergency management further than ever before, and has allowed for tighter response to COVID-19, hurricanes, civil unrest, protests and more.

“This integration also helps us move forward and lets us take the department to the next level by getting to focus on what we do best,” Schneck says.

Today, the public safety team meets with clinical staff and other employees to train them on and talk about workplace violence; gets calls from employees to help respond to and de-escalate incidents; and truly tries to align department goals with the expectation and goals of the Board and senior leadership.

“We communicate those goals and expectations down to the officers and entire team so that we can be sure that our goals align, and everyone not only understands those but can execute them at the highest level,” he says.

One of those goals that the public safety team has focused on over the last decade has been partnerships. While Schneck says that nurturing relationships with senior executives, clinical staff and other departments within the organization has transformed the status of public safety within Sarasota Memorial, so too have the team’s partnerships with outside agencies. 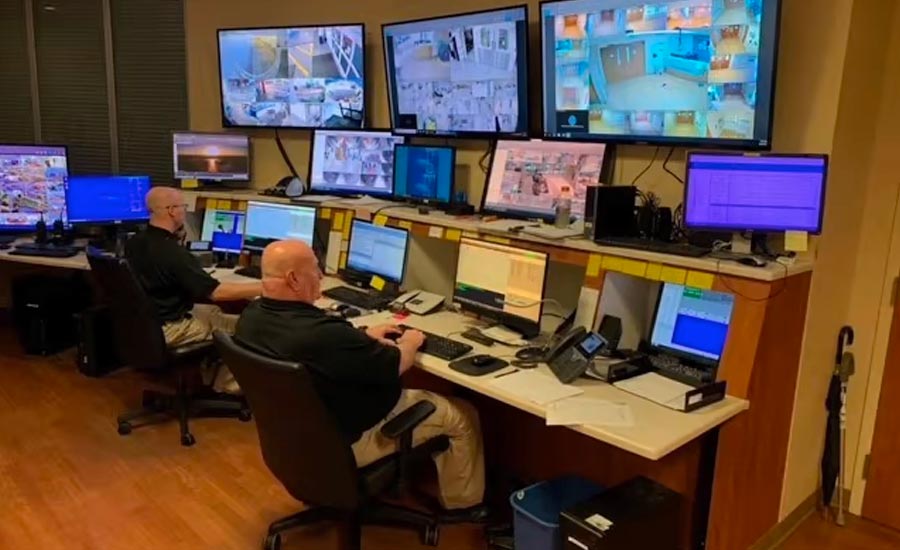 The public safety team works with community law enforcement and first responders on a number of initiatives, which has helped build strong trust and communication between the agencies and Sarasota Memorial.

“Over time, we have really become part of a team at Sarasota Memorial, but with our community partnerships, it’s as if we’ve become a part of another team as well,” says Schneck, the liaison between Sarasota Memorial and the community agencies. The public safety team trains with the Sarasota County Sheriff’s Office and the Sarasota Police Department on a number of occasions and allows the agencies to use the health system’s buildings for training as well. Schneck also gets invited to annual Chiefs’ meetings to discuss community issues and risks. Not only does it build trust and respect, Schneck says, but it also helps the healthcare system save money on different trainings.

“The relationships we have with the Sarasota County Sherriff’s Office and local law enforcement agencies are great. We want them to see us as a partner and not a blockade or a foe. That’s very important to us,” he says. “If we have an incident, we know those agencies will work with us side by side. They are here to help.” Schneck says recently, the Sarasota Police Department sent extra officers to work in tandem with the public safety department to keep the peace with protesters outside of the main hospital.

Another initiative that Sarasota Memorial has embarked on over the past year has been focusing on technology upgrades to increase situational awareness and improve security and safety efficiencies. The team is currently implementing a distributed antenna system (DAS) throughout its flagship hospital campus to allow radios from public agencies and first responders to work inside the healthcare system’s buildings.

Sarasota Memorial has also upgraded technology at its central dispatch center and added more cameras and emergency call boxes. With the new Venice-based hospital, the security technology will be integrated into the central dispatch system for a cohesive and informed approach to response and risk.

Beyond technology, the public safety team has expanded its reach since the COVID-19 pandemic hit, closing entrances that were historically open, adding screening personnel outside and in main entrances, and focusing on its perimeter security with a bike patrol. Schneck says that officers are International Police Mountain Bike Association certified and work to secure the building from the outside while taking a warm, friendly approach to visitors and encouraging calm and peaceful interactions.

“A lot of our team’s progression has come from empowering each of us to be trained and educated on what we are talking about, approachable and visible to staff and visitors, and truly engaging in conversations with everyone to let them know we are here,” Schneck says.

He adds that beyond certifications and training, the public safety and security team’s biggest accomplishment over the past few years has been the evolution, professionalism and dedication he has seen across the department, even during the trials of COVID-19 and an increase in violent incidents around the globe. “The drive and dedication of these officers and the leadership team to me is amazing. This is a career. We care, and they care, and that’s the most important thing,” he says.

Back to The Security Benchmark Report article!

Future-proofing your organization against the unknown

School security: A focus on doors

Reassessing the role of loss prevention