With the widespread proliferation of IoT devices, it is to be expected that the number of IoT infections will grow dramatically. 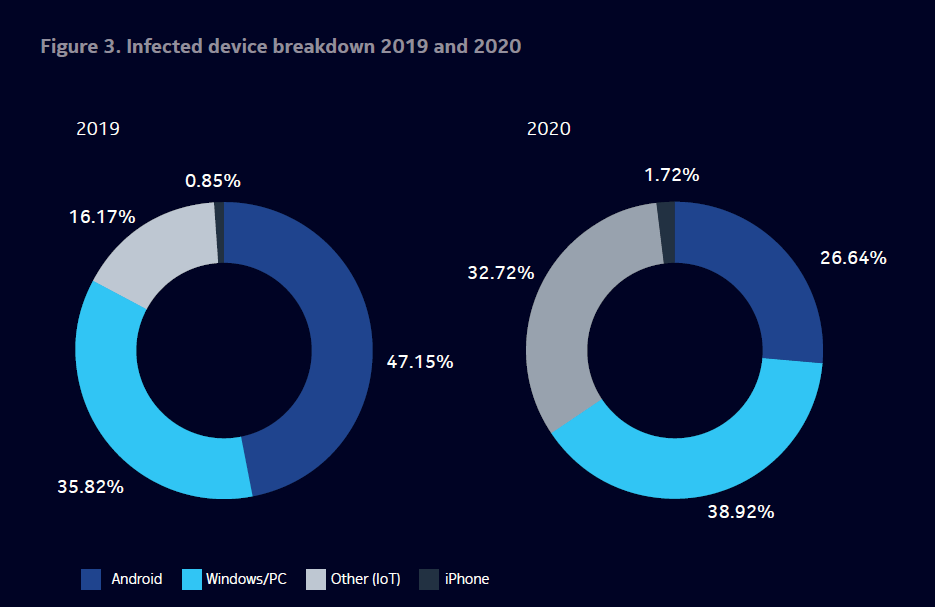 "As Figure 3 demonstrates, in 2020 this led to the increase of the share that IoT infections have in the overall device breakdown. The rate of success in infecting IoT devices depends dramatically with the visibility of the devices to the internet. In networks where devices are routinely assigned public facing internet IP addresses, we find a high IoT infection rate. In networks where carrier grade NAT is used, the infection rate is considerably reduced, because the vulnerable devices are not visible to network scanning," says the report.

According to Nokia, with the introduction of 5G well underway, it is expected that not only the number of IoT devices will increase dramatically, but also the share of IoT devices accessible directly from the internet will increase as well. A separate section of the report analyzes the security challenges in the 5G environment and highlights the important role that Threat Intelligence can play in addressing security issues in multiple systems of the 5G architecture.

Key findings from the report include:

Dirk Schrader, Global Vice President at New Net Technologies (NNT), says, “It’s no surprise that IoT devices are the crown jewels for cybercriminals. Businesses around the world are transforming their processes, their production lines using digitalized assets. Having control over these assets means that a cybercriminal’s hand is – literally – at the main switch of a digitally transformed company. The danger of being shut down almost completely is the reason why companies are more likely to pay even higher ransoms."

Schrader notes, "The situation has certainly worsened during the pandemic, as the IT operations and information security teams had to organize, setup, and secure a remote workforce more or less in no time. Plans for digital transformation need to be altered to reflect this ‘new normal’, and such the problem is likely to worsen.”

Brandon Hoffman, Chief Information Security Officer at Netenrich, explains, “Some theories on why IoT infections have become so valuable to cybercriminals is that they are unmonitored devices. Cybercriminals need infrastructure to perpetrate their attacks. As devices at home and other “things” become smarter, and have computing capacity they don’t need, cybercriminals can snap that computing power up and use it to perform attacks, transfer data anonymously, and store it in places people aren’t looking. The pandemic has certainly increased the attack surface of IoT devices because people are not spending money on vacations and therefore are buying more “things” for their homes.”