This website requires certain cookies to work and uses other cookies to help you have the best experience. By visiting this website, certain cookies have already been set, which you may delete and block. By closing this message or continuing to use our site, you agree to the use of cookies. Visit our updated privacy and cookie policy to learn more.
Security Leadership and ManagementSecurity & Business ResiliencePhysical SecurityArenas / Stadiums / Leagues / EntertainmentBanking/Finance/InsuranceConstruction, Real Estate, Property ManagementInfrastructure:Electric,Gas & WaterEducation: K-12Government: Federal, State and LocalHospitality & CasinosRetail/Restaurants/ConvenienceTransportation/Logistics/Supply Chain/Distribution/ Warehousing

Preparing for riots and looting

In times of uncertainty when there is a threat to routine, feelings of unrest amongst minority groups or groups of citizens with a sense of belonging to the minority can result in violent outbursts against governmental authorities, and populations considered to be ‘elite.’ Localized incidents of violence can even lead to widespread rioting, looting, and destruction of property, as seen in the United States, Europe, Israel and other countries around the world.

Unfortunately, leaders often choose not to acknowledge the problem, nor to invest in the minorities and neutralize their sense of resentment, thinking that the feelings will simply disappear. In reality, absence of dialogue can lead to a real lack of integration of minorities within countries. This phenomenon can lead to an increase in anti-institutional feeling, to the extent that even business owners are seen as part of the institutional elite - even if those business owners belong to the minority itself.

The larger and more well-known the business corporations are, the more they attract attention and are a target when an outburst of rage occurs. Chains and corporations (food, markets, retail, etc.), non-operational institutions and government authorities (ministries of health, welfare, law, etc.) become the punching bag of the rioters for several reasons: they are found everywhere, their level of security is usually low, the potential for looting desirable goods is high, and the police are usually not present in these places because they are preparing to protect more high-profile targets, namely government institutions such as heads of government, mayors and municipalities, vital institutions, etc.

What is security’s role in looting and riots? 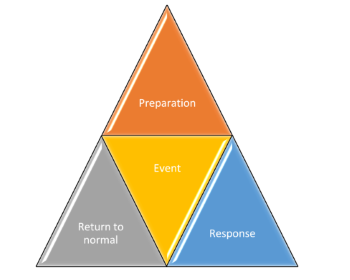 In the event of violent demonstrations that are accompanied by the destruction of property and looting, the role of security personnel at these organizations is critical in several areas, in particular:

One thing is clear. It’s important to create a rapid process for ensuring functional continuity of both types of organization: given the importance of the services they provide, governmental institutions (municipal offices, welfare agencies, courts, etc.) are required to provide a response, both during the emergency itself and immediately after; and civilian organizations may suffer great financial loss if they are unable to provide services to the public in the immediate aftermath of such a situation.

Preparing the organization to identify unusual events, in times of routine

There are several key methods security personnel can employ in their organization to identify and be prepared for unusual events, such as:

Preparing the organization for a rapid response during an emergency event

To best prepare an organization for a quick response during an emergency, it’s vital to:

Rapidly restoring the organization’s functioning during an emergency

In addition, there should be plans in place for rapidly restoring the functional capacity of the organization, even during the emergency event. For this, it’s important to:

Over the years, during periods of severe waves of violence, in ongoing states of emergency and even in routine times, we see that an organization’s emergency preparedness is crucial. Assessing beforehand how an organization can remain functional in the event of an emergency improves its capabilities, enables the identification of vulnerabilities in security and safety systems, saves lives and property when emergencies occur, and allows employees to quickly stabilize and return to routine.

Col (Ret.) Dakar Eilat is Less Lethal Solutions Division Specialist at IWI. Eilat has a background of 25 years of service in the military, secret service, border patrol, police and prison authority. As part of his duties, Eilat served as the commander of the maximum security prisons in Israel – Hadarim & Gilboa. He also established and commanded the Prison Service National H.R.T "Massada" unit, served as an Intelligence Officer & Team Leader in Israel Border Police Undercover Unit and as an Intelligence Officer in the Police National H.R.T Unit. He holds a B.A in Psychology and Education, and M.A in both Political Science and Middle East Studies. He obtained Diploma from the IDF and is a Research Associate within the Institute for Counter-Terrorism, Herzliya, Israel.
Subscribe For Free!
More Videos