The Caribbean and its pristine beaches may be a tourist magnet, but life in paradise comes at a price: the soaring violent crime rate is higher than in Latin America or Africa.

The study, Restoring Paradise in the Caribbean: Combatting Violence with Numbers, is based on the results of new crime victimization surveys carried out in The Bahamas, Barbados, Jamaica, Suriname, and Trinidad and Tobago.

When comparing results from Caribbean capital cities with the International Crime Victimization Surveys database, non-violent property crimes in the region are low. The average rate of individuals victimized by theft of personal property, in a 12-month period, in the Caribbean is 4.8%, compared with the global average of 8.1%. Rates of burglary (4.1%) are significantly lower in the Caribbean than in Africa (8%) and Latin America (5.9%). 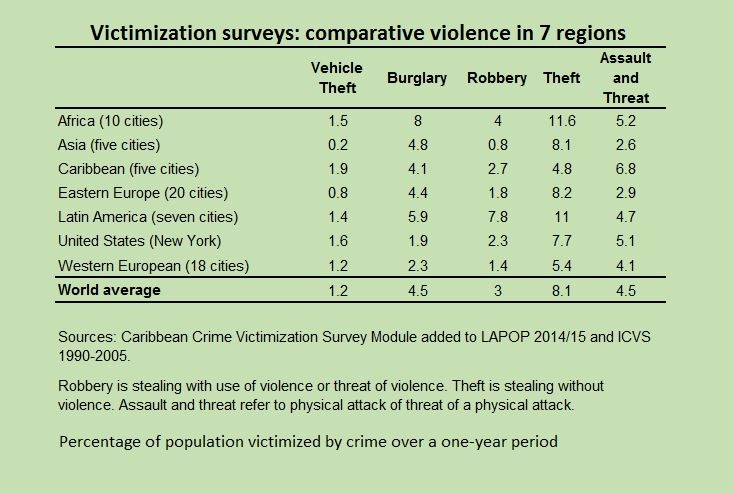 Violent crime rates are among the highest in the world. The average rate of victimization by assault and threat (6.8%) is higher than in any other region, including Latin America (4.7%). Nearly one in three said they had lost someone to violence. Guns are used about twice as often in robbery and three times as often in assault in the Caribbean as compared with the global average.

Violence is concentrated in certain neighborhoods and demographic groups, often far away from tourist resorts. Certain demographic groups are repeatedly victimized, mainly 18 to 25-year-olds who live in poorer areas.

A high proportion of victims said they were attacked by people they know, often in their homes or neighborhood.

“The victimization surveys help us understand how crime affects populations, particularly those who are most vulnerable,” said Ana María Rodríguez,  manager of the IDB’s Department of Institutions for Development. “Notably, women and youth were found to be less likely to report violent crimes to the police.”

“The Caribbean region is rightfully known for its beauty, warmth, culture, music and, yes, beckoning environment,” said Therese Turner-Jones, manager of the IDB’s Caribbean Department. “But the darker side of having some of the world’s highest violent crime rates remains a cause for concern. This book provides the basis to build policies that are more likely to work because they are more firmly rooted in data and best practices.”

The highest victimization rates in the region for car theft, simple theft, robbery, and assaults were in New Providence (The Bahamas). Port of Spain (Trinidad and Tobago) has a relatively high rate of car thefts, robberies, and assault. Kingston shows medium-to-high rates for all categories except for assaults and threats, which are higher. Bridgetown (Barbados) and Paramaribo (Suriname) show comparatively low rates for most types of common crime.

Victims are concentrated in neighborhoods with high physical disorder, low trust among neighbors and a gang presence. Even within those neighborhoods, crime is concentrated in pockets. For instance, in Port of Spain 50% of crimes are committed in only 3 percent of street segments.

Crime also takes a toll on the private sector. Twenty-three percent of firms have experienced losses because of crime and nearly 70 percent spend money on private security measures.

One special area of concern is violence against women and young children, considering that early experiences of violence in the home is also a strong predictor of later perpetration. The study finds that one in three Caribbean adults approve of or are sympathetic to wife beating if the woman is unfaithful, which is higher than in the United States or Latin America.

“We found that tolerance of violence against women and children is higher than comparable regions,” said Heather Sutton, the report’s lead researcher and coordinator. “The literature shows that high tolerance is predictive of high levels of actual violence. This is one important risk factor that perpetuates the cycle of violence and delinquency.”

The Caribbean crime victimization surveys – by bringing light on crime with data that leads to better and more effective policies – are part of a continuing effort by the IDB to provide more knowledge and operational support to help countries in the region prevent crime and violence. 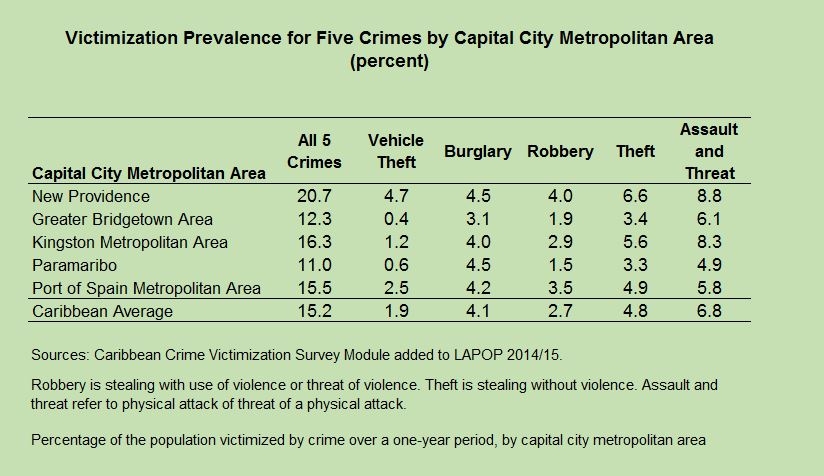