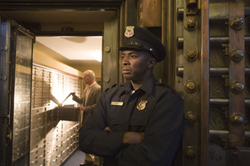 In recent years, the banking industry has gone through a tremendous amount of change. The list starts with heavy consolidation and the formation of mega-banks and continues with technology influencing the way we bank, increased regulation and a host of new security threats. While each one of these trends presents new opportunities, at the same time they’ve created a set of complex challenges.

In the U.S., industry consolidation has seen the number of commercial bank brands decline from roughly 12,000 in 1990 to 6,000 in 2011. During the same period, total bank branches grew (from about 51,000 to 83,000). This creates challenges for security operations, which now have to deal with a hodge-podge of legacy systems resulting from mergers and acquisitions. It also adds workload for bank security control centers that now need to monitor more sites – and more security systems and sensors – over a wider geographic area. Add to this a backdrop of increasing regulation and ever-growing security threats, and the complexities become evident.

PSIM is well-suited to address these very complexities. For those not familiar with PSIM, here’s a brief primer:

PSIM (which stands for Physical Security Information Management) is a software solution that integrates, synthesizes and analyzes information and alerts from many security, safety and operational systems/sensors to form a common operating picture. More advanced PSIMs utilize adaptive, pre-defined response plans (which can be embedded in the PSIM solution) to guide operators’ responses to situations based on indicators of what’s happening. PSIM provides full situational awareness and situation management. It helps operators know what’s happening where, and what to do next. PSIM also documents each event timeline – every action taken, with links to video, audio recordings and other incident information.

So how does PSIM address the complex security needs of banks?

One obvious benefit is in the area of investment protection. Banks that consolidate through M&As typically centralize their security operations for operational efficiency and savings. In the past, this would have meant extensive custom integration, or “rip and replace” of existing technology, which can be very expensive. PSIM offers a better alternative. It uses gateways to aggregate information from different legacy systems into a common, seamless interface.

This has a three-fold benefit: banks can leverage existing technology investments; easily merge multiple security control centers into one; and achieve a common operating picture across all of their established and newly-acquired branch locations. Additionally, the security operator on the other side of the screen never even knows or cares that there are different brands of VMS, access control systems, etc. underlying the PSIM interface. Plus, one interface also means a shorter learning curve and less training.

PSIM can also help banks address many types of security threats and operational issues more efficiently and effectively. For example, by integrating intrusion detection, access control, video, GIS and communications, and empowering security operators with automated response plans, banks can better detect and handle security breaches. For example, an unauthorized access attempt at a data facility many thousands of miles away could trigger an alert in the control center, instantly presenting location information and relevant video of the would-be intruder, along with an associated access card photo for instant verification. Furthermore, all of this information could be captured and preserved for an ensuing investigation or compliance report.

Here’s another example of how PSIM could be used. The security control center could become the focal point for monitoring panic buttons across every bank branch in the network. In the event a branch was robbed and a panic button was pushed, an alert would automatically be generated in the control center. A map would immediately pop up on the operator’s screen showing the exact location of the alarm, along with the surveillance video associated with the specific panic button pressed and step-by-step emergency procedures. Information could instantly be routed to bank security management, local law enforcement or other responders. Depending on the situation, the PSIM system could also automatically activate other systems, for example, to secure doors or to contact key personnel by phone, text or email.

Security operators could even be alerted to equipment issues, such as an ATM video camera failure or ATM failure, for fast troubleshooting. This is critical because in some states, such as New York, ATM security regulations require that a surveillance camera be installed and properly maintained for every ATM. Failure to meet such regulations could result in costly fines.

Asset tracking is another banking application for PSIM. Because of the portability of bank bags, financial institutions are faced with the constant threat of money theft. According to the FBI’s Bank Crime Statistics, thousands of bank bags are stolen each year and less than half of the stolen funds are ever recovered. By integrating with location tracking systems such as GPS, RFID and blue force tracking, PSIM technology can help track and monitor infinite numbers of far-flung and movable bank assets, including armored vehicles and bank bags.

Even if your organization isn’t a financial institution like a bank, with the adoption of so many retrofitted buildings into a larger, chain organization, PSIM can be used in various sectors, adapting multiple surveillance or access systems into a centralized program. This eliminates training time, installation costs and the miscellaneous hodge-podge of legacy security systems.

Erez Goldstein is Senior Product Marketing Manager for the Banking Vertical for NICE Systems. He has close to a decade of experience in the security industry and holds a degree in Industrial Engineering from Tel Aviv University. For more information on this topic you can contact Erez at erez.goldstein@nice.com.
Subscribe For Free!
More Videos