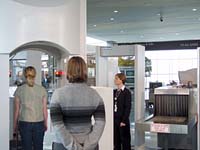 Walkthrough explosives detection is moving further towards the perimeter as private and public facilities see a greater threat from suicide bombers and people with concealed explosives. 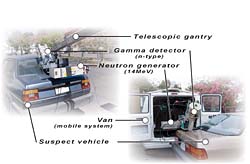 This car bomb detector uses stoichiometrics, which has the ability to quantitatively

Outdoor intrusion detection, once simply aimed at alarming to people on the perimeter of a facility, campus or prison compound, now faces a greater challenge. With the growing and tragic use of human and car bombs, organizations ranging from airports, power facilities, high rise office buildings and corporate headquarters must extend bomb and explosives detection further into the perimeter.

Traditionally, outdoor security sensors are meant to detect intruders as soon as they enter a protected area and before they can gain access to people or valuable assets. Systems from such firms as Perimeter Products and Senstar-Stellar, both of Fremont, Calif., have outdoor systems that face unique environmental conditions such as temperature extremes, rain, snow, animals, blowing debris, seismic effects, terrain and traffic.

Many types of traditional outdoor sensors protect the perimeter of American and international facilities.

Volumetric sensors generate an invisible detection field that locates intruders moving through that field, while fence- and wall-associated sensors are above-ground detection sensors attached to an existing fence or wall. They detect intrusion when an intruder disturbs the detection field or when vibration due to cutting or climbing on a metal fabric fence causes an alarm.

Other outdoor systems include video motion detection, which analyzes video to create the detection field, and barrier sensors, which provide both a barrie to intrusion and a sensor system for detection. Taut-wire sensors are one example of a fence perimeter structure-associated sensor.

Beyond use of such traditional outdoor detection approaches, emerging technology seeks to increase the speed and accuracy of alerting the end user to a person or vehicle carrying explosives. Such domestic and international terrorist attacks can cause extraordinary damage, even if the person or vehicle does not gain close proximity to the facility.

Intrusion systems that include bomb and explosives detection have moved out of their respective buildings and into checkpoints and, with discreet inspection systems, throughout outdoor parking lots and garages. Several power plant facilities in Canada, for example, contracted to purchase walkthrough explosives trace-detectors to help detect explosives concealed on the body of individuals passing through security checkpoints distant from the plant facilities.

The technology they employed comes from GE Ion Track of Wilmington, Mass. More than 75 GE Ion Track EntryScan3 units have been deployed to help protect power plants in the United States, Canada and Mexico. 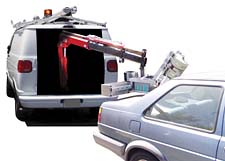 Emerging technology allows security to inspect vehicles in parking lots or as they move along a perimeter roadway. In stealth mode, the technology works from the inside of the inspecting vehicle and into the suspect vehicle. In the gantry mode, an arm goes into a suspected vehicle.

Security executives may link walkthrough detectors more with transportation, military and airport applications. For instance, the U.S. Transportation Security Administration has acceptance-testing criteria for identifying targeted explosive substances carried on a person’s body. However, the first walkthrough explosives detector, introduced in 1979, was built to protect U.S. nuclear power plants at the direction of the U.S. Nuclear Regulatory Commission.

There are different technological approaches for a variety of explosives detectors. In the case of those just purchased by the Canadian power plants, a natural airflow phenomenon called human convection plume eliminates the need for forced air from a fan, which would stir up contaminants, dirt and dust. It enables a cleaner sample acquisition for higher detection sensitivity.

Advances by private security and public safety personnel also are finding methods for detecting explosives in cars, trucks and other types of vehicles. Some simple approaches include mirrors and security video cameras that would allow a guard to see under a suspect vehicle. However, more powerful explosives and sophisticated ways to hide them have encouraged better, quicker ways to detect danger further away from a facility.

There are several avenues in this car bomb niche: pulsed elemental analysis with neutrons, thermal neutron analysis and stoichiometrics; the latter combines the actions of neutrons, gamma rays and alpha particles.

The U.S. Interagency Working Group on Counterterrorism has an ongoing, nationwide competition for new counterterrorism technologies, including car bomb detection systems. This past summer, HiEnergy Technologies Inc. of Irvine, Calif., was one of the firms selected in the review. The company’s CarBomb Finder, based on stoichiometrics, is a remote, clandestine detector of bombs in trunks, seats and engines of parked or moving vehicles. The CarBomb Finder detects explosives in the closed trunks of parked or moving cars from a van containing a concealed detector.

“Our technology circumvents the necessity of opening the car by its ability of ‘seeing’ through the steel of both the police car and the suspect car,” said HiEnergy’s CEO, Chairman and Chief Scientist Dr. Bogdan Maglich.

There’s even a more impressive security device that goes beyond the CarBomb Finder. Developed through a U.S. Army project, it’s a truck that can detect an airborne bio-hazard and alert authorities before it can cause harm or havoc. It can spot and track illegal trespassers or attackers even in complete darkness – and repel them should they try to disable the truck’s advanced surveillance and communications capabilities. It can sense an incoming missile and knock it out of the sky.

The technology, called Smartruck III, was designed for America’s homeland or a war zone but the inventors say it also will see use by private security.

The vehicle showcases the latest in armor protection, highly-advanced communications and detection and deterrent capabilities.

“It’s the right truck for right now,” said Dennis Wend, director of the National Automotive Center. “Our first focus is for our soldiers here and abroad; but at the same time, we’ve designed a number of commercial versions which can be easily modified to address homeland security or other priorities.”

Smartruck III’s advanced perimeter defense capabilities are based on the military’s F-CLAS system. Among features: An automatic fire suppression system can sense an explosion or fire in the crew compartment and suppress it within milliseconds; a periscope camera includes a night vision camera, visible-light camera and laser range finder in a self-contained pan-and-tilt; and the telemmersion system for high-resolution situation awareness, that can rise eight feet above the truck for capturing the 360-degree full-motion spherical scene at 100 million pixels per second. This compact system includes directional sound monitoring and a base unit that can hold up to four hours of recording.

The base vehicle for Smartruck III is an International V-6 powered Crew Cab, 4200 series medium-duty platform.

Of course, there is an old fashioned method of protecting perimeters and sniffing out explosives.

Employed in World War II, the Korean engagement and Viet Nam, specially-trained dogs have walked a perimeter and, more recently, can detect explosives. The U.S. Department of Defense currently is in a crash program to breed and raise more bomb-sniffing dogs. 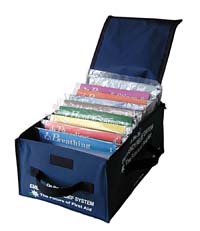 To handle perimeter security problems that call for first aid, there’s new technology that speaks the responder’s language, no matter which language that might be.

Dubbed the Intelligent First Aid Kit, made by DLH Inc. of Tinton, N.J., and designed in partnership with the National Safety Council, it combines supplies and visual instruction cards for the most common injuries – separated into individually labeled and color-coded packs for each type of injury – so that the user has sufficient supplies and comprehensible instructions for managing a specific injury. Audio chips take the technology one step further, delivering audio care instructions by pressing the appropriate language button affixed to each injury instruction card. The chip comes in most major languages.

Explosives detection plays a greater role on the perimeter.