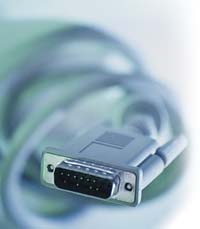 The migration to a digital platform and networked environment is progressing rapidly since the first IP-based video surveillance products were introduced in 2002. With such a rapid deployment of new technology and products, manufacturers have disseminated a great deal of information in a relatively short period of time. As a result, there are many questions to be answered on how to select and configure even the most basic forms of networked video surveillance equipment.

In most instances today, and the foreseeable future, systems integrators and end-users who wish to make the transition to a networked-based system begin with the deployment of cameras – usually in remote areas such as a parking facility or satellite location that may or may not be part of an existing network infrastructure. Cameras operating on a network are truly digital by definition. Digital signals being transmitted from a camera’s output across a network do not undergo any analog-to-digital conversion. Hence, there is little to no concern about signal loss down the systems’ chain as video signals are processed and eventually recorded. This presents a significant performance advantage over conventional analog-based systems products.

Ease of transmission and camera access are two other important operational benefits. Cameras can be accessed by their assigned addresses on an Ethernet-based LAN (large area network) or WAN (wide are network) in most cases using a standard Internet browser – just as you would access your favorite Web sites by their URL. This provides system designers with many different options when establishing the control and access parameters for a video surveillance system, especially in the areas of software-based control and digital video recording.

So where does one begin? This is a question fielded at trade shows over the last year from dealers, system installers and users alike.

It’s important that you (and/or the system designer you are working with) clearly define the role that IP cameras and related networked products will fulfill in your system. Here’s a list of key questions that need to be addressed:

_1. What will be the man-to-machine interface – a PC or conventional NTSC hardware?

Depending upon the extent of the system addition or rebuild, your camera switching and control capabilities may also be changing. This is a critical juncture in determining whether your system will employ analog-based devices such as a matrix switcher that interfaces with your networked cameras/devices, or a purely digital based system where camera control functions are software based on a PC or server.

It is important to determine the number of users who will need access to the system simultaneously from different locations. For example, in a large facility, security personnel may have a central control room supported by several guard stations that also have camera access and control capabilities, in addition to key management personnel with monitoring capabilities. This will dictate the level of processing power you’ll need for multi-user, and perhaps multi-platform operations.

What infrastructure is available or will be needed for the camera/system – WAN, DSL, T1 or LAN subnet?

It is possible – and in many instances very cost-effective – to deploy video surveillance cameras side-by-side on an existing network infrastructure designed for data applications. Although the same transmission technologies are at work in both data and video networks, the compression method used by the video products and the available network bandwidth, combined with your expectations for quality and image-per-second reproduction, will determine the system requirements.

_3. What are the image quality/frame rate considerations?

The process starts with you the user – the architect of the system. You need to determine if still images, a series of still images or full-motion video is required at the monitoring location(s). Once your needs are clearly defined, the cost-performance realities of the desired network will play a critical role in the actual image reproduction capabilities, with which you end up. For example, there may be instances where digital video recorders (DVRs) can be located at the camera locations to record full-motion video while still-image transmission over the network will suffice for viewing. These are important considerations to be dealt with early on in the design process. As previously stated, there are many bandwidth performance scenarios, such as compression, to evaluate based on your specific imaging requirements.

You need to determine how much video you need to record, where you plan to record it and how you plan to archive the images (if necessary). A networked system offers many different options that also can prove to be very cost-efficient. As previously mentioned, you may decide to have DVRs located at each camera location for full-motion recording of all camera activity with frame rate transmission from each DVR transmitted via the network to a central monitoring location. Or, you may opt to have all recording take place at the central location on a server-based system, at which point you’ll need to weigh the bandwidth, compression and image quality requirements to determine your specific network requirements. The same factors need to be evaluated when considering multi-platform, multi-user applications.

Once you have addressed these questions, you’ll be on your way to making decisions as to the type of IP-addressable cameras and equipment you’ll need, as well as the complexity of the infrastructure to support these devices. There’s no doubt that networked video surveillance cameras and devices are paving the way to a new landscape for the security industry, while ushering in a fundamental change in the way security professionals conduct business. As with any evolutionary process, the transition from one phase to the next will take time, and the methods of deployment that deliver the greatest results will prevail. In the meantime, it’s important that you establish short and long term systems objectives so you can gauge the progress of your transition to a networked platform.