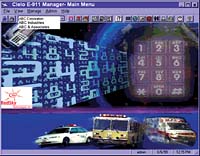 Enhanced 911 software works between the office telephone system and an enhanced 911 service so that the system immediately and automatically pinpoints the location of the person calling for help.

Someone needs help, calls 911 but rescue workers can’t find the victim. From the sixth floor of an office building, there is an emergency and one of the organization’s employees needs assistance. What’s the victim’s natural response? Of course, call 911.

With an enhanced 911 system, security executives, facility managers and building owners can ensure that emergency response officials can pinpoint the victim automatically, without the caller saying a word.

Ideally, the caller can speak intelligibly and knows exactly where he is located in the building so he can get prompt attention. With luck, a co-worker is in a position to help and to activate your internal emergency response plan.

But what if the caller can’t talk or is isolated? Or what if he is confused about his exact location? Or violence that renders the victim helpless.

If the call is made to the 911 center and the person can’t talk, or doesn’t know exactly where he is located, help could arrive late. Lives could be threatened. Office safety could be jeopardized. Rescue workers could be impaired from doing their jobs. In short, your emergency response plan could be thrown for a loop if police, fire or paramedics can’t respond quickly because they can’t locate a 911 caller.

In the above scenarios, the crisis response starts with the telephone. If a business or office phone system isn’t equipped with an E-911 – most aren’t – the 911 dispatcher may not know the exact location of the caller. The information provided at the dispatcher’s workstation likely will be just the address of a company building. Very quickly, a bad situation could turn tragic.

With an E-911 system that’s properly maintained, finding the location of the caller shouldn’t be an issue. Someone who calls for help using a telephone system with E-911 automatically will provide emergency officials with the right address, plus the floor, phone number and location within the building, for example, “NW corner, 6th floor building." An E-911 system equips office phones with specific location identification information and is designed to cut both the response time and the confusion of first responders.

Automated solutions monitor your telephone system for changes, such as when a person moves to a new office. The software then automatically imports this information from the business system, updates the 911 database, then transfers the location information to the E-911 service provider. Acceptance and verification of this data also are monitored automatically to ensure there are no errors and the information is complete.

Other telemanagement solutions, such as an online directory manager that provides accurate personnel recognition, or an automated call-accounting solution that traces call harassment and telephone use, can be teamed with the E-911 system to add bonus security precautions, all powered from the on-site phone system.

E-911 use in an office setting grew from a 1987 tragedy. A 33-year-old executive working late one night in a Chicago high-rise called 911 for assistance. Fire had broken out on the 21st floor and spread quickly. Repeatedly, she called for help, unable to get out or tell the 911 dispatcher exactly where she was located on the floor.

Rescuers were in the vicinity, but unable to find her. Because all that existed at the time was the basic 911 system, they couldn’t target where the call originated. After about an hour of searching, firefighters found the woman’s body, too late to save her.

Her death prompted enactment of an Illinois law requiring businesses, schools and other institutions to have an E-911 equipped system. The Illinois law affects entities that occupy 40,000 square feet or more, or have multiple buildings sharing the same address.

This year both the Federal Commu-nications Commission and a bi-partisan Congressional team began investigating E-911. National legislation may be on the horizon as variations of the Illinois law sprout at the state level.

Clearly, E-911 is an important checklist item for any security official or facilities manager overseeing such a plan for their offices. An incident at Illinois-based Navistar International underscores the system’s life-saving potential.

When a disgruntled worker shot four co-workers, a grief-stricken employee used a company phone to call 911. According to the company’s corporate security officer, police and other emergency services personnel knew exactly where in the building the landline call was placed because Navistar had an E-911 system. Police arrived at the facility within minutes and had important information on where to respond.

The Navistar incident shows one reason why E-911 is growing in popularity among institutions. When it comes to protecting workplaces and helping people, getting to the right location is critical. Had the 911 caller at Navistar been heard by the shooter, that person’s life could have been in jeopardy for fear of being noticed. Thankfully, it wasn’t.

Some institutions have configured their telephone systems so that any 911 call from their premises is directed to the security department, not the public safety agency that handles 911 calls. These organizations are encouraged to seriously consider reconfiguring their system using E-911 so security officials can assist the victim and stabilize the work environment, instead of focusing on getting outside help.

Preparing for a disaster takes work. The scenarios for disastrous events can be difficult to anticipate, describe and model. Companies that wait until a heart attack or assault occurs may face legal penalties and public scrutiny far more severe than the simple preventive and protective measures available to them.

Without a doubt, should a disaster strike, well-crafted and proactive planning that includes an E-911 system can lead to much better outcomes for companies and their stakeholders. Today’s security officials and facilities managers are in the driver’s seat to ensure E-911 is an essential component of every organization’s emergency response plan.