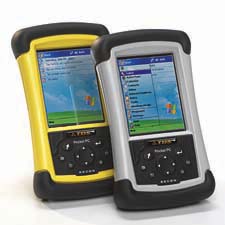 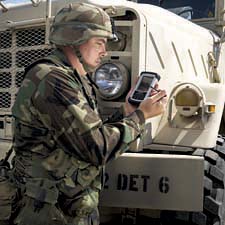 Handhelds work well in military and homeland security settings.
Nobody wants to think about catastrophic security emergencies. Unfortunately, somebody has to.

The stockpile is located in a lightly populated area of northeastern Oregon. To protect the area’s people and environment, the facility developed CSEPPa comprehensive plan with as many as 400 emergency responders, mostly local volunteers. To improve communication capabilities and build a bridge between first responders and the central operations center during an emergency, CSEPP created the Incident Response Information System (IRIS).

“We had a system that kept situation info internal at the central ops center,” Beard said. “But that’s 50 miles away. Responders in the field need crucial info in real-time, with two-way communication.”

Beard knew that he needed a rugged handheld communications device that also had the capacity to hold a database of the maps and plans he would need in the field. He had heard about a handheld computer manufactured by the Corvallis, Ore.-based company Tripod Data Systems (TDS). The Recon, as it is called, combines computer technologies, Windows Mobile 2003 software for Pocket PCs operating system, and can add things like global positioning and two-way wireless communication. 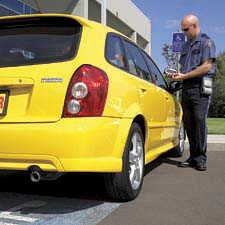 Officials at the Chemical Stockpile Emergency Preparedness Program use a Recon. This one has an extended CF-Cap and displays a map on the screen. Far right, using a handheld security personnel can become more efficient.

“With a Recon, first responders have the entire response plan in the database, and they can call up a map of the chemical plume that shows wind speed and direction in relation to their exact position,” Beard said. “They can access a real-time status board that tells them what type of accident has occurred,” such as when, what and how much, and if there are initial injuries. The information helps responders answer the critical question: “What do I need to do?” in real-time.

Instead of three-ring binder with the proper procedures and report forms, the documents are in the palm of their hand, Beard said, noting that responders can use the Recon to navigate to where they need to be, and download maps showing facility locations, occupancy numbers, building layouts, contact people and more.

The Recon’s CompactFlash ports and other connections let users attach a variety of peripheral devices to the handheld. CSEPP already has experimented with portable printers and barcode scanners to put coded wristbands on injured people – helping expedite treatment on site or at the hospital. Responders also can send digital, on-the-scene photos to central operations or medical personnel, and they can complete and send reports on the spot, ensuring accuracy.

While the hope is that the CSEPP emergency plan never is used, Beard says the devices give emergency personnel the technology they need to protect the community in a worst-case scenario.