Logic Behind the Logic 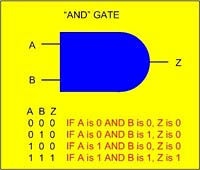 PLCs use Boolean logic gates: in an ‘And’ gate, if A and B are both 0, then Z will be 0, for example.
The design of an integrated electronic security system requires the composition of sophisticated components such as a card access control system, security video, intercom system and a programmable logic controller or PLC-based alarm monitoring and control system.

This type of system is representative of high security applications such as those required by correctional, justice, military, financial and utility facilities.

The programmable logic controller is best defined as an input and output processor. In this case, let’s call it a digital input and output PLC. Digital refers to a discrete logic signal of either a “1” on, or “0” off.

Programmable logic controller digital functions operate on the principle of what is known as Boolean logic. Developed by George Bool in the mid-1800s, it is basically the way most computers operate today. Boolean logic uses a process of “And,”“Or,” “Not,” “Nor,” “Xor” and “Xnor” gates. The use of these gates creates logic of: if, when and how digital inputs and outputs operate. There are many Web sites which explain in greater detail the principles of Boolean operation.

PLCs are also in security systems where similar situations occur. For example, if there is a group of doors in an area and only one door shall be allowed to be open at any one time, the PLC can control the electrical operation of the doors by monitoring the door position inputs. “If” any one door in the group is open or “unsecure” then all other doors in the group shall “Not” be allowed to electrically open until the open door is closed or “secured.”

This process is called “interlocking.”

Interlocking is valuable in a correctional facility’s security system where there is a need to isolate people traveling through the facility. This process does not seem very complicated until the security monitoring and control system receives requests to open doors from multiple users such as a local operator at a control station and the users of the card access control system. The PLC receives all of these requests, processes which door shall be allowed to open as well as provides status of each door in the group to the security system. The PLC’s industrial nature and its ability to operate using redundant processors obviously is the perfect centralized collection point of the digital input requests and digital output commands. It’s the final decision maker on the security system sequence of operations and, therefore, is a standard piece in the design of most electronics-based security applications. But what about lesser security applications where the PLC-style of control is needed but not readily available in a card access control?

Traditionally card access control systems have the ability to perform the function of simple relay linking. Relay linking is the logical linking of a digital input to a digital output. Yet, standard card access control systems often do not perform the Boolean logic level of control. PLCs have this ability; still the programming here can be complicated and local commercial security contractors typically do not have staff trained to install and program PLCs.

An alternative to the PLC would be to duplicate the logic using hardwired relays. This can become quite a mess in wiring and documentation, not to mention the space needed to house the hardwired stuff. As a result, the best that the card access control system could do would be to combine simple relay linking and hardwire relay logic. Still, this also proves a messy and difficult-to-troubleshoot design.