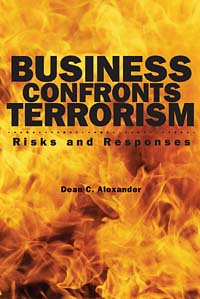 A ground-breaking book from Dean Alexander looks at the risks and responses of American businesses as they face a changed security environment.

In the aftermath of a catastrophic terror incident, severe, negative effects can undermine economies, financial markets, labor, companies and individual investors. Stock markets often decline – sometimes sharply – although some equities, from defense to gold companies, may, at least initially, spike upward. Stock markets ultimately recover – whether within days, weeks or months – depending on many factors, including some that have nothing to do with terrorism.

Currencies in the country directly affected by the terror attack tend to weaken vis-à-vis hard currencies. Oil prices may rise sharply following a major terror attack, as was in the case immediately after Sept. 11 and March 11 Madrid train bombings. Similar scenarios are likely to occur in stock, currency and commodity markets should another major terror attack take place.

Depending on the type, scope and sectors affected by a terror attack, business transactions can be delayed, cancelled or revised during days or longer periods of time. Issues of political risk and insurance coverage have become factors considered often in the post-Sept. 11 business calculus.

Businesses need to be ready to issue decisions on how to proceed in the aftermath of a major terror attack, including whether to rebuild offices and businesses destroyed. Homeland security firms and other products and services that may benefit government and industry in combating terror (e.g., foreign language schools) are buttressed as demand for such items is expected to continue.

The advent of the homeland security business age certainly provides business opportunities for manufacturers and service companies. Yet, there will come a point when demand for such goods and services will wane. Nevertheless, the technological and methodological advances learned by companies in their contributions to the War on Terrorism will undoubtedly have many civilian uses that may spurt growth in non-counterterrorism sectors.

Government costs related to overseas counterterrorism activities – from Afghanistan to Yemen, the Philippines and Iraq – also include “stabilization” expenditures from which American homeland security and other firms may benefit from through government contracts. However, continuation of the war on terrorism also results in security expenditures, deeper deficits and rising transaction costs that harm companies and economies.

Renewed interest in investing and fusing homeland security firms may arise after a massive terror attack. This phenomenon, plus demand for homeland security products, should stimulate technological and scientific developments that otherwise might not have been forged.

Due to government’s counterterrorism efforts, and associated military and intelligence activities, business will be both pushed into negative situations and pulled into positive opportunities. This is most typified in Iraq, where American companies are rightly concerned that setting up operations will make them a target while equally intrigued about the possibilities of being a part of what should become a quite robust foreign economy within a decade. What security provider has not already pondered the huge demand for their services right now, weighing the possibilities against the dreadful risk involved? Other ramifications of terror on business can be designated as transcending effects: terror costs in terms of outlays and rising transaction costs, security at a business site, interactions with customers, changes in sourcing, inventory and logistics, and legal issues.

Post-Sept. 11 interest in all things homeland security has led many traditional businesses to reference security issues in their advertising and day-to-day operations – even when such matters are tangential to their business. Another manifestation of the terror business boom is the multitude of counterterrorism conferences, hastening the arrival of the counterterrorism business age.

These developments are mindful of the Internet heydays when great companies flourished but some firms hawked questionable products and services; experts abounded, information was flush and the next big thing mesmerized investors.