Rack Up One for the Mounties

Pic Operator comfort and safety complement the high tech in the center as consoles are arranged in a "U" shape facing 42-inch plasma screens mounted on a wall and multiple monitors mounted in racks.
Opening new vistas is a constant mission of the Royal Canadian Mounted Police. Back more than a century, units later to form the federal force helped bring law and order to a rough and tumble western Canada. Today the RCMP is exploring new ground in use of security technologies, especially in key control centers.

For example, the RCMP recently expanded and upgraded its Operations Control Center (OCC) in Ottawa.

This OCC covers Canada’s National Capital Region, serving a population of about 1.2 million in and around Ottawa. Its functions include everything from telephone dispatch services and electronic monitoring to protection over 150 internationally protected venues.

If there’s a motorcade traveling along the ceremonial route between the residence of the Prime Minister and Parliament Hill you can be sure the security operators at OCC are watching.

Before the upgrade, OCC operators worked at three large but cramped control stations. A major overhaul of everything from the technology the OCC used to the space it occupied was needed. 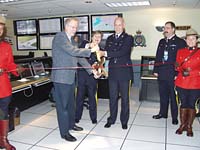 RCMP and other officials help cut the ribbon officially opening the new operations control center. Employing cutting-edge technologies, the OCC handles services ranging from telephone dispatch to electronic monitoring while covering what the Royal Canadian Mounted Police call the National Capital Region, with a population of about 1.2 million.

Of course, having the technology available is one thing; making it all work together seamlessly is something else entirely. For this enormous task, the talents of Denis Lavergne were enlisted and who was given the mission of designing a facility that would integrate the updated technology into a space that would meet operational requirements without sacrificing the comfort and safety of operators.

Lavergne’s 16 years of experience integrating video systems for the RCMP gave him the insight to know that the operator consoles would be an important component of his design. For these, he enlisted the help of Winsted of Minneapolis. He worked directly with Winsted’s Steve Halasz, a product manager.

Halasz’s project engineers worked closely with Lavergne to create the command center. For instance, some of the monitors added to the OCC used touch-screen technology. This created an ergonomic need for the operators to be closer to the monitors in order to safely and comfortably work at these stations.

To get beyond this issue, the vendor-end user team determined what a safe distance between the operator and the monitor would be and then Winsted manufactured a smaller work surface that would fit in that amount of space without losing any functionality.

According to Inspector Pierre Bélanger, the RCMP spared no expense when taking the communications needs of the organization as well as the health and safety of the operators into consideration in the OCC, with 25 employees, working 12-hour shifts.

Aesthetically, after reviewing hundreds of material and color choices, the RCMP picked a design that used oak and blue very similar to the corporate colors of the RCMP.

The final design includes four operations consoles, one supervisor console and one playback station. The consoles are arranged in a "U" shape facing eight 42-inch plasma screens mounted on a wall and multiple monitors mounted in racks. The arrangement allows operators to safely view the monitors at their consoles or view the larger plasma screens without changing position.

Lighting and ventilation of the OCC facility were also important elements. In addition to the larger space, new consoles and improved technology, the facility is now properly lit and climate controlled for the comfort of the operators and the safety of the sensitive equipment.

The design phase of the project took about a year, mostly due to additional demands placed upon the OCC systems after the September 11 terror attacks in the United States. The installation of the consoles and racks was completed by Nathalie Desjardins from Altel of Montreal, and took about 2 weeks from delivery to completion. The project was totally complete about two months later once electronic equipment was installed and integrated.

"The operators are in heaven," says Bélanger. "It is a superb communications centre that is operationally excellent."

The mix of off-shelf and customized furniture also met other goals of the RCMP executives. They wanted their operators to feel both comfortable and safe during long hours at a stressful job.