A facility security director is challenged with the difficult task of securing his facility against many different types of threats. These threats can run the gamut from possible terrorist attacks to burglaries to natural disasters. In designing and implementing an integrated security system, it is important to provide a suitable level of security to key vulnerable areas such as windows. This is an area that is often undersecured. Windows pose an easy point of entry, as they can be easily broken. They also pose a possible threat to life in the event of an explosion or earthquake, where more than 50 percent of injuries and fatalities are due to flying shards of glass. In the past, wired glass or very thick tempered glass was a typical solution to this problem. However, there have been some recent technological developments in protective window films that provide the same level of protection but at a significantly lower cost and without impacting the architectural aesthetics of the building.

These window films are polyester-based, average approximately 7-mm thick and adhere to the interior side of the window using special adhesives. Installation is by certified technicians. The film can deter burglaries without having to resort to using wrought iron bars or window gates. Ballistic tests have shown that bullets fired from a variety of weapons including the .38 Special, 9mm Luger and .44 Magnum at the window at a distance of only 25 feet were significantly slowed down, and in some cases did not even fully penetrate the glass.

Even if the window should break during an earthquake or projectile impact, all of the broken pieces of glass will be held together within the film. These films, however, must be installed by the manufacturer and may take up to 90 days to cure. This time frame is an important issue to take into consideration, especially on a renovation construction project.

The film has heat rejection properties that can reduce transmitted solar energy by up to 79 percent, thereby significantly reducing building energy consumption costs. This is an important issue for the security director to raise during department budget discussions with the chief financial officer, as a cost vs. savings ratio can be easily demonstrated. These films are currently used on government buildings and military installations worldwide. After extensive government tests, these films have shown to reduce the hazard level from flying glass from high to low by various testing laboratories. Typical installation prices are $5.50 per square foot with a minimum charge of approximately $225.00 for a large office-building window. At least one company offers additional special film formulations for windows and other surfaces. This anti-graffiti film can be easily removed and replaced after a vandalism attack.

Another area of concern for the security director is the building air intake and HVAC system. In the event of a terrorist attack, hazardous gases or virulent airborne biological organisms can enter the building, causing illness or even death to the occupants.

There are innovative air filtration systems that use a combination of ultraviolet light (UV-C) and bioactive hydroxyl radicals to destroy a wide spectrum of viruses, bacteria, fungi, molds, spores and other airborne pathogens. These organisms include anthrax, influenza A (flu), streptococcus, tuberculosis, smallpox, reovirus, echovirus, adenovirus, rhinovirus and many others. UV-C light is germicidal and deactivates the DNA or RNA of viruses and other pathogens. Most infectious organisms are very sensitive to UV-C light. Organisms such as tuberculosis, smallpox and anthrax require less than 9,000 microwatts of UV-C light to inactivate or kill them. These filtration units further work constantly to reduce cross-contamination within the facility. A typical unit that protects 18,000 square feet of area uses a nominal 8-11 watts of UV light and costs less than $1,000. 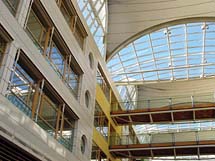 Air also can be purified using a unique, scientifically advanced gas plasma purification system using a combination of ultraviolet light and ozone. These wall-mounted units occupy less than eight square feet and weigh less than 60 pounds. One manufacturer of such a device has conducted tests on its unit to show that anthrax bacteria entering the filter for a period of only 0.5 to 1.0 seconds were destroyed at the rate of 70-99.9 percent. This type of filter can effectively remove other harmful particles and biological contagions including bacteria, molds and viruses down to 0.001 microns, while also destroying hazardous fumes and toxic gases. Such units are expected to retail for between $2,000 and $4,000 each.

A revolutionary technology currently being used to deter the growth of microbes in building HVAC systems employs the use of inorganic silver ions. Air handlers in buildings can be designed with anti-microbial-coated steel to capitalize on the natural protective antibiotic properties of silver.

As an additional precaution against an air contamination event in a facility, the building HVAC system should have an emergency shut-off switch located at the security command and control center. The switch should be manually activated with a key switch by the security director or a security supervisor during such a crisis. However, this should be performed only if it is absolutely certain that doing so will reduce the immediate risk to the building occupants to potentially lethal contamination, or if directed to do so by qualified hazardous material personnel. Some security practitioners recommend interconnecting the building HVAC system to the fire alarm system, so that the HVAC system could be automatically shut down whenever a manual pull station is activated.

Window films and protective air filtration systems are important aspects to any well-designed security system. Consultants and facility security directors should familiarize themselves with these essential devices and implement them as an overall part of their facility security protection plan.

Modern high-efficiency particulate air (HEPA) filtration systems are able to remove up to 99.999 percent of microbial particulates down to 0.3 microns in size as well as chemical gases and vapors. These microbial particulates include bacteria, pollen and mold spores. Viruses, however, will not be stopped by a HEPA filter. The HEPA filter media is made of very thin glass fibers. The texture is much like blotting paper, preventing particles from passing through. These HEPA filters maintain their efficiency for a period of two to five years under normal operating conditions and can be retrofitted into most building HVAC systems. However, the HEPA filter by itself has zero percent efficiency for removing gaseous chemical compounds. These gases pass right through the filter. In order to filter out toxic gases, activated carbon must be added to the filtration system. The carbon acts like a sponge, absorbing chemicals, gases and odors. Toxic chemical gases including cyanogen chloride, sarin, V agents and aerosolized contaminants react with the carbon filtration and become absorbed and retained by the filtration system.