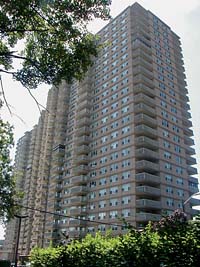 But a couple years ago, they unfortunately came to expect the unwelcome sound of a noisy false fire alarm about once a week. Without a doubt a nuisance, the false alarms were a symptom of a much larger problem.

With 507 units on 26 floors, the MedWest building, built in 1973, converted to co-op units in 1981. It’s the home to about 1,600 residents, and 75 percent commute daily to nearby New York City. In addition to a community of co-ops, the complex also houses a variety of commercial establishments and services conveniently located right on the ground floor, including a dry cleaner, a convenience store, hair salon and even dentist and doctor offices. MedWest also boasts a swimming pool and sundeck, playground and children’s room as well as a basketball court and two tennis courts.

According to Steven Curry, fire marshal for the town of Fort Lee, MedWest did not stand alone in having its alarming problem. “We have 45 high rises in Fort Lee, more than any other city in New Jersey,” he says. “At one point, between all these buildings, we had up to 200 false alarms due to alarm systems that were in need of updating.”

As fire marshal, it is Curry’s job to make sure that all buildings have the proper protection in the event of a fire.

Working with the building superintendent at MedWest and investigating the problem, Curry learned that the scope of the old safety system’s problems extended beyond false alarms and included other challenges linked to an outdated alarm system.

Many high rise buildings built in the 1970s and 1980s are not up to current fire codes,” Curry explains. “The life expectancy of these older fire alarm systems is just ten to 20 years. Plus the fire codes have changed a great deal within the last two decades and systems need to be updated. It’s difficult to support or update these older systems due to the difficulty of getting replacement parts.”

Curry adds that, when purchasing a new fire alarm system, it’s important to work with a vendor that has parts and service readily available. “Like many of the Fort Lee high rises built in the 1970s, the older MedWest system had actually become obsolete and parts were no longer available.”

To address MedWest’s needs and bring the building up to current standards, Curry and the building’s management team turned to United Federated Systems (UFS), a specialist in fire and security systems and a distributor and installer of Silent Knight fire alarm systems. Silent Knight of Maple Grove, Minn., part of the Honeywell Fire Solutions group, offers industry-wide compatible fire alarm solutions for small and mid-size institutions and commercial sites. Curry was already familiar with the effectiveness of Silent Knight systems, as a number of other high rises in Fort Lee had replaced their outdated systems with the firm’s equipment.

Getting Up to Code

"The Silent Knight products offered everything we needed to stop the false alarms and bring the building up to code,” UFS President Terry Mostyn says. “One of the principal advantages of working with a Silent Knight system is that parts and service are always readily available. I’ve been working with their systems for almost 19 years and some of their original panels that I put in are still working, and I’m still able to get parts for them quickly.” He adds that Silent Knight has never made a panel for which they don’t supply parts whether over the counter or direct. Also, their support people are exceptional. “When you’re talking about fire safety, you can’t afford to wait for parts or service.”

Some of the issues that needed addressing at MedWest, beyond the false alarms, included problems with decibelity and overall system monitoring. Also, several common areas were in need of more up-to-date monitoring devices. To solve these problems and bring MedWest up to code, UFS specified an IFP-1000 integrated voice evacuation system and addressable fire control panel, 600 IntelliKnight SD 505 smoke detectors, 90 SD 500-PS pullstations and alarms in every unit.

The all-in-one IFP-1000 combines feature-rich fire control panels with the convenience and functionality of a voice evacuation system. It can support up to 1,016 addressable devices that allow the user to determine precisely which device has been activated and/or needs attention. The IFP-1000 also uses a distributed amplification scheme to enable power sources to be linked directly to appropriate areas of evacuation, rather than having to institute a complex wiring scheme.

“We placed the IFP-1000’s main fire alarm panel next to the building’s main electrical room over the front lobby,” Mostyn says. “To make sure that the entire building was protected, we installed power supplies on every fourth floor.”

“If anything should ever go wrong with a panel, the main panels immediately send a signal to King Alarm of Freehold, N.J., which is the monitoring company we use. It’s the same thing with the voice evacuation system. The system is really streamlined and simplified. If there’s trouble, the alarm sends out a signal to King and right away the problem area is serviced,” Mostyn adds.

Six hundred smoke detectors and 90 pullstations are now spread out through the building’s common areas and commercial spaces such as the stores and offices. Each of the IntelliKnight addressable photoelectric smoke detectors has a unique address recognized by the system panel. These units are particularly well suited for detecting dense smoke typical of fires involving soft furnishings, plastic, foam or other materials, which tend to smolder. Such materials are often in apartment building common areas. The addressable pullstations also feature pinpoint location identification as well as easy installation and operation.

In fact, everyone involved in this project, from building management to UFS, appreciated the speed of installation. “Because the building had alarms going off weekly, we had four months to complete a high-rise installation that would usually take five to eight months. A combination of extra manpower and the simplicity of installing Silent Knight, with its minimal wiring, helped us to come in under our tight deadline. That complete installation, with the 507 apartments, probably went the smoothest of any job I’ve done in my career,” Mostyn contends.

SIDEBAR 1: Inside the Facility

With 507 units on 26 floors, the MedWest building was built in 1973 and converted to co-op units in 1981. It’s home to about 1600 residents; most are daily commuters to nearby New York City. In addition to a community of co-ops, the complex also houses a variety of commercial establishments and services conveniently located right on the ground floor, including a dry cleaner, a convenience store, hair salon and even dentist and doctor offices. MedWest also offers its residents a swimming pool and sundeck, a playground and children’s room, as well as a basketball court and two tennis courts.